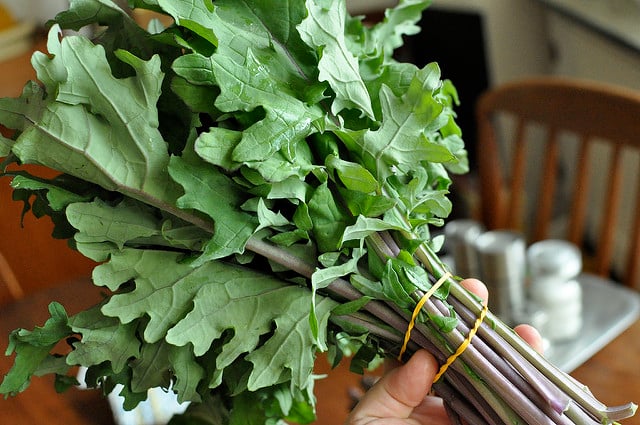 Last Sunday, my beloved Headhouse Square Farmers’ Market reopened for the the 2010 season. It was such a joy to stroll the Headhouse Shambles with my regular Sunday morning pals and greet the many familiar farmers. As so often happens at the farmers market, I bought more than easily fit into my meal plan for last week (we had a couple dinners out last week, as well as some produce already in the fridge). I wasn’t worried though, as part of the delight of buying remarkably fresh food direct from the people who grew it is that if store well, it lasts far longer than similar grocery store produce.

I didn’t make it the market yesterday, choosing instead to spend my Sunday with family, celebrating Mother’s Day over brunch (I’d like to say that I was being smart, buying more than I could use, knowing I wouldn’t make it the following week, but I truly wasn’t thinking that far in advance).

Heading into this evening, I knew that dinner would be the last of yesterday’s leftover quiche (spinach and broccoli, brought by my cousin Angie) and a batch of potato salad that I’m testing for my July Grid article. Sadly though, I needed one more thing before I could call dinner complete. You see, I have this green vegetable rule. That rule (drilled into the meal-planning section of my brain by my mother) states that there must be a green vegetable served with my nightly meal. The only the events which permits the waiving of this rule are infirmity or family vacation. 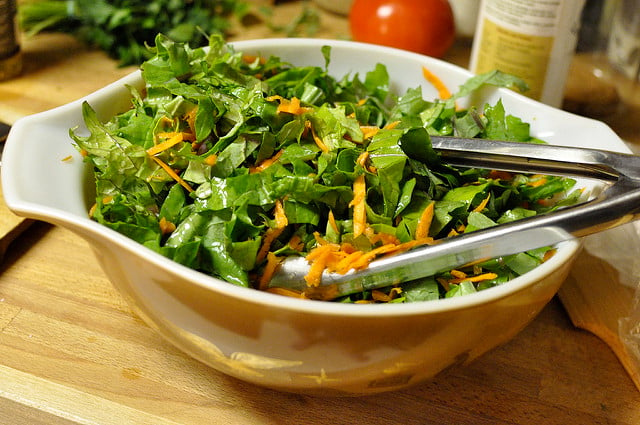 Poking around my crisper, trying to satisfy my need for some vegetal (potatoes do not count), I came across the kale I bought at the market last week, still looking quite crisp and verdant. Immediately inspired, I pulled three slim carrots out of their bag and headed towards the countertop with purpose.

I chopped the kale into narrow ribbons, washed it carefully in a salad spinner and combined it with the now-grated carrots. I dressed it with three tablespoons each walnut oil and rice wine vinegar, as well as some salt and pepper. Using tongs, I tossed it all together and then let it sit for a bit while I got the rest of dinner together.

After about fifteen minutes, the kale leaves had relaxed and the carrots had married with the dressing, turning it a pleasing orange. Don’t be fooled by the picture above, it was taken just after the initial tossing. When it came time to eat, the salad was far less voluminous.

The nice thing about this salad is that it is flexible. A combination of toasted sesame and olive oils work just as well if you don’t have walnut oil (or, if you have a bottle you hate to use because you see it as precious, do your taste buds a favor and use some here. I’ve discovered that hoarding oils isn’t worth it, eventually they go rancid and then you feel silly for having wasting something so lovely).

If you do use the walnut oil and want to really bring its flavor out, top individual portions with a few toasted walnuts (don’t stir them directly in, they’ll loose their crunch). Slivered red onion also makes a nice addition. Or, if you’ve chosen the sesame oil path, replace the salt with a few dashes of soy sauce (or Bragg’s, if your kitchen runs to such things) for a faux asian flavor profile.

Oh, and if you have leftovers, this is one of those rare dressed green salads that actually can survive the night in the fridge without harm. It’s really good the next day topped with saucy pinto beans or a few crumbles of goat cheese.

21 thoughts on "Kale and Carrot Salad"