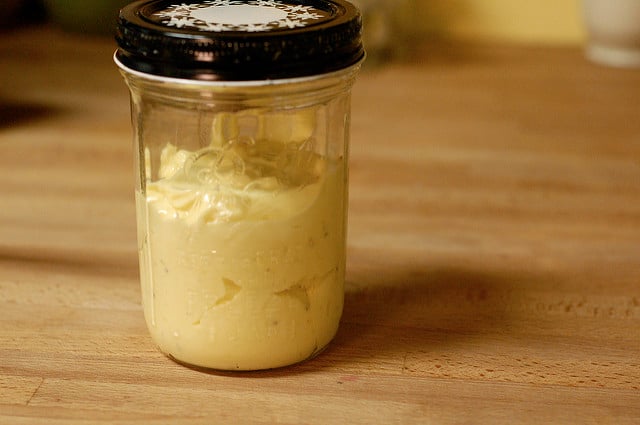 For years, I’ve been reading food books in which homemade mayonnaise is described in rapt, nearly euphoric terms. I recently read an essay (did anyone else read this? Where was it? Thanks to Taylor, the story has been found.) in which a woman describes how her aunt was known for her pimento cheese sandwiches and brought them to every major event in her community. The first step in making these beloved sandwiches was whisking the mayonnaise together from scratch. The sandwich maker stated plainly that the sandwiches weren’t worth preparing if you were going to resort to Hellman’s or Duke’s.

Thinking about homemade mayo, I’m also reminded of an essay in Amanda Hesser’s Cooking for Mr. Latte, in which she recalls picking up Julia Child from the airport in France and they eat oeufs mayonnaise together at a small countryside cafe. The description of Child happily eating freshly made mayonnaise on eggs, french fries, baguette and from the tips of her fingers has always delighted me.

However, despite all these lovely literary evocations, until tonight I had never before made mayonnaise on my own. I’ve been talking about it for months, mentioning it as a possible Fork You topic, without settling down and trying it in my own kitchen. I followed a recipe in Nigella Lawson’s How to Eat, as I’ve always loved the way she writes about food, her instructions made me feel calm instead of anxious. I also was comforted by the fact that she offered several variations on how to save your mayo if it broke.

Mine did break at first, primarily because I chose to be lazy and use my KitchenAid mixer’s whisk to do the work (Nigella does offer it as an option, but also states that she always does it by hand). As I incorporated the olive oil, my burgeoning mayonnaise couldn’t hold another drop and became gloppy and loose. I tried Nigella’s suggestion of adding couple of drops of boiling water, but that did nothing to reconstitute it, so I broke open another egg, separated it and slowly incorporated my broken mayo into that yolk, hand-whisking it in. That worked perfect and I was rewarded with gorgeous, creamy mayonnaise. I used some to make egg salad, which I ate on top of a pile of baby arugula for dinner (Scott’s away and so my meals have become less structured in his absence).

I now have a half-filled pint jar of really delicious, homemade mayonnaise in my fridge. I think tomorrow night I’ll stir some minced garlic into some and turn it into aioli. 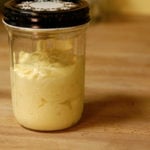 Adapted from Nigella Lawson’s "How to Eat"