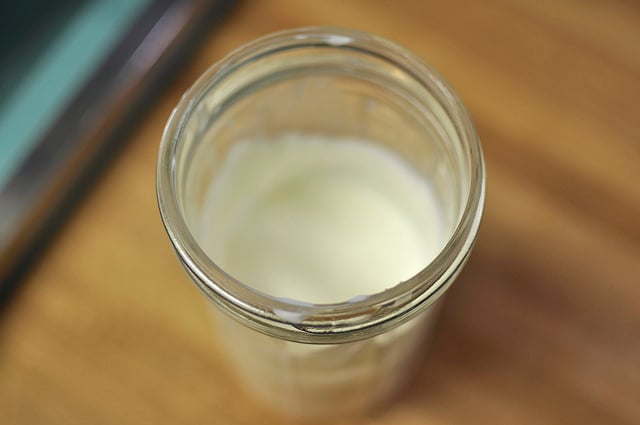 A week or so ago, I posted a link to this Serious Eats post about making homemade creme fraiche on the Food in Jars Facebook page. The response was quick and fevered. People were amazed at how easy and simple it was to do something like this at home.

Here’s the funny thing. This is something I’ve been doing at home for years now but it’s never occurred to me that it would make a good subject for a blog post because it’s so incredibly simple. Truly, it’s nothing more than combining some heavy cream with a generous glug of buttermilk in a jar or bowl. Give it a brief stir to combine and then leave it out on the counter (uncovered) while you sleep.

I tend to let my creme fraiche do its thing on the counter for about 24 hours before I move it to the fridge, but the length of time you let it culture depends entirely how thick you want it to be and the intensity of the tang you’re hoping to achieve (longer equals more tang). When you’re done, take a moment to marvel at the alchemy of it. It never fails to feel a little bit like magic to me.

If your kitchen is dusty or you have pets who might be interested in a jar of cream on your counter top, stretch a bit of cheesecloth over the mouth of the jar and secure it with a rubber band. The good bacteria that you’ve introduced with the buttermilk needs to be able to breathe in order to transform the cream. 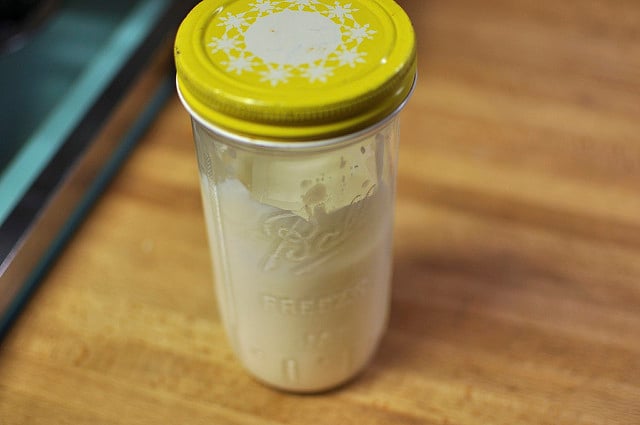 For those of you who like more specific measurements, I use approximately three tablespoons of buttermilk for every pint of cream (though truly, I don’t measure. Who needs to clean another spoon?). I do try to use local, grass-fed cream when I can find it, as the flavor is even better. However, if you can’t find similarly pedigreed cream, don’t let that be a deterrent to giving it a try.

If you’ve never tried creme fraiche before, it’s similar to sour cream, though it’s typically got a higher percentage of butterfat. It’s also got a more complex flavor than the sour creams we can buy at the grocery store. It’s amazing stirred into soups or dolloped on top of cut fruit or berries.

Amanda Hesser frequently suggests stirring it into a bit of freshly whipped cream for lightness and nuance (though in many situations it can be substituted for the whipped cream entirely). I like it on top of flourless chocolate tort as it works well to cut the richness of the cake.

Have you tried to make creme fraiche at home before? How do you like to use it?