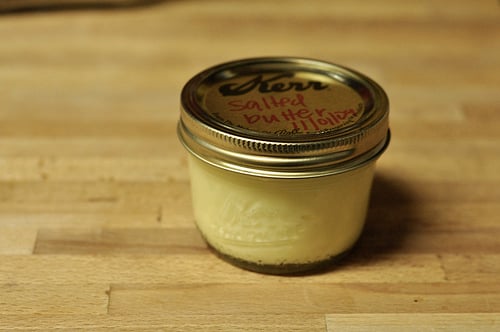 When I was growing up, I regularly begged my mom to tell me stories of when she was a little girl. As I grew, she began to run out of little girl stories and so started to progress to teen-age stories and tales of her college years (I imagine they were somewhat censored, at least during my younger days).

Once, she recounted the story of a college professor who welcomed students on the first day of classes with a jar, a marble and a pint of heavy cream. He’d pour the cream into the jar, drop in the marble, screw on the lid and hand it to a student in the first row, explaining that he wanted everyone to introduce themselves. When you had the jar, it was your turn to talk. Oh, and you had to keep shaking the jar while you talked. How else would they have butter at the end of class?

A child of the grocery store revolution, this was the first time my mom had experienced the alchemy of butterfat. She shook vigorously during her turn, transfixed by how something that had once been a smooth liquid was transforming into something new.

Of course, as soon as she told me this story, I began a campaign for homemade butter. It took a while, but I did eventually wear her down and we made butter, just like she had done all those years ago (although, knowing how much effort is required to shake a pint of cream into butter, I can’t imagine we followed entirely through. I bet my mom ended up finishing it off in the kitchen with some hand beaters. 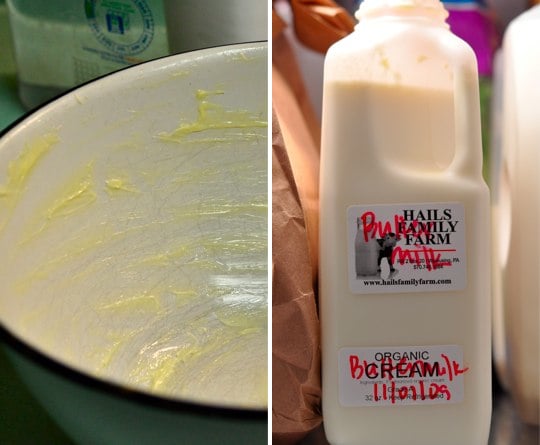 These days, the urge to make my own butter still does occasionally strike, particularly when I’m faced with wonderful local cream, like I was last Saturday at the Rittenhouse Square Farmers Market. I bought a quart of said cream and Sunday night, at the end of a long day of cooking, I made butter (thinking all the while about Laura Ingalls and her pioneer sisters). I cheated though, as I used my mixer as opposed to shaking, churning or otherwise putting my own elbow grease into the process.

Here’s how I do it: I pour the cream into the bowl of my Kitchen Aid, which I’ve fitted with the paddle attachment. I crank the bowl into place and drape a clean dish towel over the machine. Only after I’ve installed this very basic splash guard, do I turn the mixer on to it’s second level. Then I walk away and let the thing run for 7 to 10 minutes.

When I come back, I make sure to turn the motor off before removing the towel to check on my progress. Best case scenario, there will be floes of butter drifting in a sea of buttermilk. If not, replace the towel and run a bit more. If you do have butter, position a strainer above a bowl, detach the mixing bowl and pour the butter/buttermilk into the strainer. Lift the strainer off the buttermilk bowl and rest it above the mixing bowl.

Set aside the buttermilk (I pour it back into the bottle from whence the cream came and use it in a variety of baked goods until it’s all gone) and return to the butter. Plop it back into the mixing bowl and get a sturdy wooden spatula. Start working the butter, pressing the remaining buttermilk out of it (if you want to salt your butter, this is a good time to do it, as it will get well integrated in the pressing process). A couple of times, rinse the butter with very cold water, in order to help wash the buttermilk out of the butter (you won’t lose all the salt).

When you’ve pressed out all the buttermilk you can, and the butter appears smooth and of an even consistency, pack it into half pint jars. If you’ve made more than you can use in about a week’s time, freeze some of it, as I’ve found that homemade butter goes off more quickly than the commercial stuff.

After reading all that, you might wonder why a person would make their own butter, when it can be bought cheaply with far less effort. Well, as with many things, you appreciate it more when you do it yourself. Additionally, making it yourself means that there won’t be any stabilizers or preservatives in it. Lastly, it just tastes better when you make it in your own kitchen.

I started making my own butter sometime last year, after I realized that I had developed an expensive imported butter habit. My cream comes from cows who graze within my 100 mile food shed and the processing is all my own. Mmm, butter.