In the last few years, I’ve gone from being barbecue sauce ambivalent to being pretty into the stuff. A big part of my change in attitude stems from the fact that I make most of the barbecue sauce I consume these days. That means that I get to customize the flavor, sweetness, and heat and create something that I’m actually excited to paint on chicken or use as a braising medium for a meaty pork shoulder.

In the past, I’ve made barbecue sauce from peaches, cherries, and apple butter. This time, I’ve embraced the traditional approach and have made a version that starts with tomatoes. To maintain the classic theme, I’ve also preserved it in honest-to-goodness twelve ounce barbecue sauce jars from Fillmore Container.

Let’s talk about preserving in these bottles before digging into the making of the sauce. They are designed for commercial production, so they will give your sauce a professional look (which is particularly fun if you’re giving the sauce away as a gift or taking it to a food swap).

These bottles come in two different versions. One uses lug lids, and the other uses a continuous thread (just like mason jars do). I typically opt to use the jars that take the lug lid closure because the lids have a button that depresses when the jar has sealed. I find that that makes it easier to tell whether you’ve gotten a good seal or not and I always appreciate that kind of clarity.

You prep these bottles the same way you do mason jars. Wash them with warm, soapy water and then when your sauce is nearing completion, put them in a boiling water bath canner and bring them up to temperature. You also want to warm the lids you’ll be using, to ensure that the plastisol is ready to form a good seal. For more on canning with one-piece lug lids, read through this post.

Once the jars are hot and the sauce is sufficiently cooked down, it’s time to fill. It can be tricky to fill these bottles because the opening is fairly narrow. I’ve solved that issue by using the wide-ish funnel from this set to adapt my regular stainless steel funnel to fit. It helps to get the sauce into the jars without splatter or mess.

I fill the jars to approximately 1/2 inch headspace, wipe the rims, and twist on the lug lids. At this point, you want to take care to twist the lids tightly enough to ensure that the plastisol comes into contact with the rim of the jar, but not so tightly that the air can’t vent during the boiling water bath. Then you process.

Because the jars are nearly 8 inches tall, it can be a bit of a trick to find a pot that’s tall enough to hold them fully submerged. Make sure to test the jars for size in your pot before you get everything set up.

Now, to the sauce. As I was creating my recipe, I referenced a number of sources, including the National Center for Home Food Preservation, the Ball Blue Book, and the old Complete Book of Home Preserving. All three sources had nearly identical recipes, and so I used their work as a starting place.

I opted to leave out the peppers and celery, used a combination of brown sugar and molasses to sweeten, and upped the amount of vinegar a little to make a sauce that was a bit tangier.

Making a sauce like this is a multi-stage process, but the end result is worth the effort. First, you combine the tomatoes, onions, garlic, and jalapeno in a large pot and cook them down until totally soft. Once the onions are tender (because they’re the toughest to start with), push the vegetables through a food mill fit with its finest screen. This separates the fibrous solids from the sauce and makes for a better finished product.

Then you add the remaining ingredients and cook the sauce until it has reduced to a thickness that satisfies your sense of what barbecue sauce should be. At this point, I like to puree it with an immersion blender, to get rid of any clumps that formed during cooking.

Then you funnel it into your bottles, cap them, and process for 20 minutes in a boiling water bath canner. When the processing time is up, you want to remove the bottles promptly. The seal is formed when the pressure changes thanks to the temperature differential and so you want to create a situation in which the pressure is strong so that they seal tightly and well.

Once the bottles are cool, they’re ready for labels and either the pantry or your gifting closet. 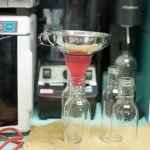 Disclosure: Fillmore Container is a Food in Jars sponsor. Their sponsorship helps keep the site afloat. They provided the jars you see here and are providing the giveaway prize, both at no cost to me. All opinions expressed are entirely mine.