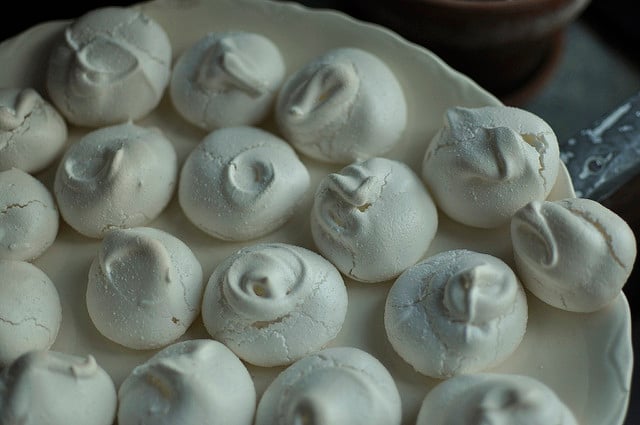 In my family, there is truly only one acceptable birthday cake and it’s actually not a cake at all. It’s a giant shell of sculpted meringue, filled with vanilla ice cream, strawberries and freshly whipped cream, topped with a shower of toasted sliced almonds. We call it Pinch Pie.

This epic dessert first entered the McClellan celebratory lexicon sometime in the 1940s. My grandma Bunny found the recipe in a woman’s magazine and made it as a Valentine’s Day treat for her husband (in those days, she whipped the egg whites using a hand-powered rotary mixer. It was a true act of love). My uncles quickly figured out that they preferred this dessert to any cake they’d had before and started requested it for birthdays. A tradition was born. 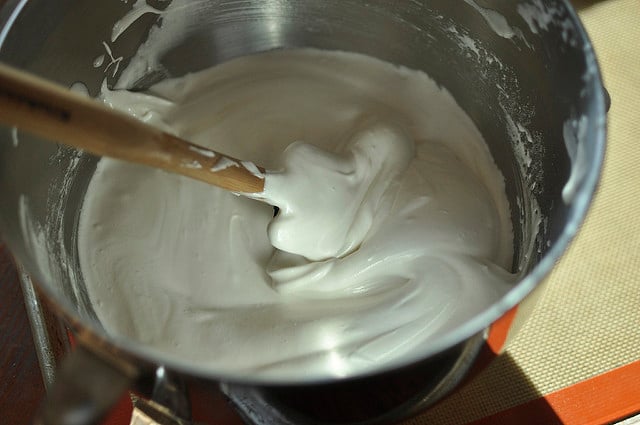 By the time I came along, Pinch Pie’s dominance as the birthday dessert of choice was well-established. During my first eight years of life, I ate Pinch Pie as many as six times a year. With family birthday gatherings taking place at least every other month (sometimes a single dinner would suffice for several), the math worked out in everyone’s favor. What’s more, Bunny had long since graduated to a electric hand mixer, so it wasn’t the burden to make that it once had been. 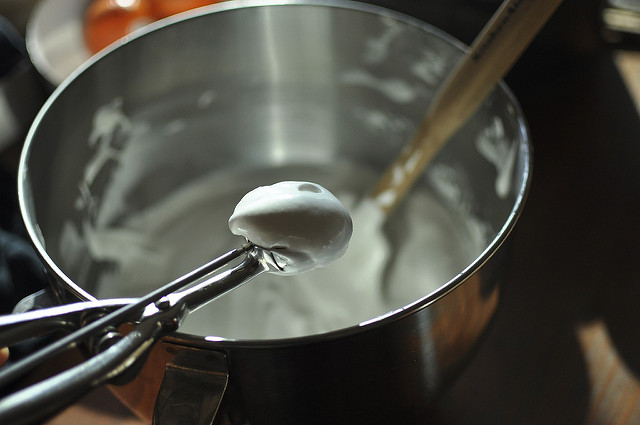 But as so often is the case, all good things eventually come to an end. In my case, it was the announcement that my parents were moving us out of Los Angeles and up to Portland, OR. We would no longer have regular access to Bunny and her Pinch Pie factory.

So I did what any food-obsessed eight year old would have done. I started begging Bunny for meringue lessons. I figured that as long as I had the skills, I wouldn’t be entirely deprived. And so I watched. I took notes (I still have those original pages, carefully marked up in my elementary school handwriting). I learned her meringue formula. 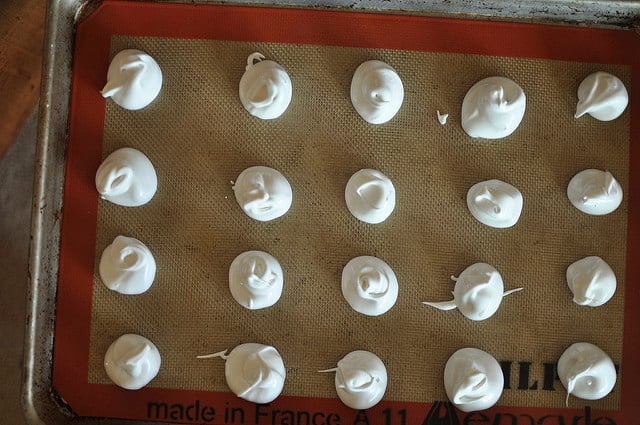 In the early years, I would call Bunny every time I made the meringue shell for Pinch Pie. She’d remind me to warm my eggs to room temperature and to make sure I separated each one over a small bowl before adding the whites to the mixing bowl (one drop of egg yolk and the whole batch is ruined). She’s ask about the weather in Portland and warn me that it was harder to get stiff peaks if it was raining out (it always was).

Bunny died when I was 14, putting an end to my Pinch Pie support line. But each time I make meringue, I think of her. I imagine she’d scoff at my use of a stand mixer to beat the egg whites, declaring that it takes most the skill out of it. She’d admire my use of Silpats and parchment, as they make the meringue lift easily off the baking sheet (before those two items came along, we struggled mightily with meringues that stuck fast). Most of all, she’s be happy that I was keeping the tradition alive. 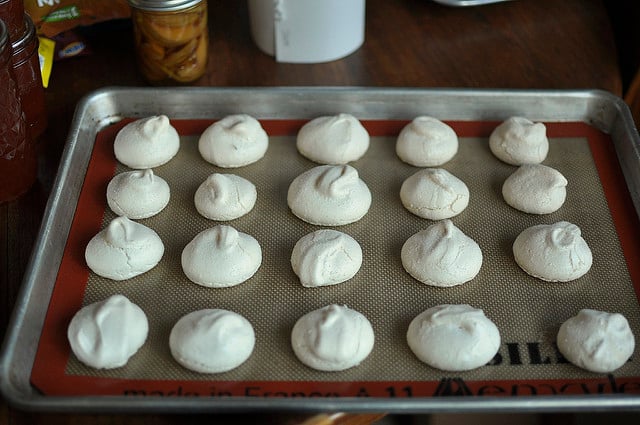 Lately, I’ve been doing a lot of baking that required multiple egg yolks, but no whites. Yesterday, I had half a dozen egg whites quietly cooling their heels in the refrigerator. It was time to make meringue. Because it’s holiday time, I decided to make this batch of meringue into cookies, instead of a large shell. This way, they can be added to cookie plates, be taken to potlucks and, with the addition of a dollop of fruit preserves and a bit of whipped cream, be turned into a quick dinner party dessert. I do love flexible food.

Preheat your oven to 250 degrees and line 2 cookie sheets with parchment or Silpats. In the bowl of a stand mixer, combine 6 egg whites (at room temperature, please) with 1 teaspoon cream of tartar. Beat on medium high until they have at least doubled in volume and are nice and frothy.

Then add 1 1/2 cups granulated white sugar in half-cup batches, making sure that the first scoop is fully incorporated before adding the next. Finally, when the mixture is looking stiff and glossy, beat in 1 teaspoon vanilla extract. 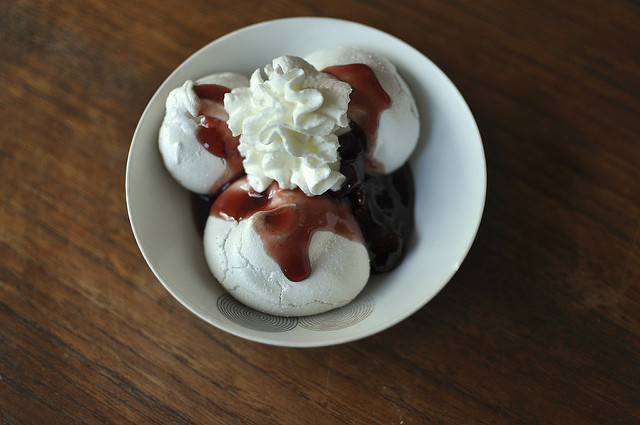 but you could also spoon all the meringue into a pastry bag or ziploc with a corner cut off. I am particularly unskilled with pastry bag coordination, so I choose to scoop. Bake at 250 degrees for 25-30 minutes. Shorter baking times will leave you with cookies that are still tender in the center, long times will yield a crisper cookie.

Should you want to add flavors beyond vanilla to your meringue cookies, you can add 1/4 cup unsweetened cocoa powder, some tiny chocolate chips, or 1/4 cup crushed candy canes. There’s a lot that can be done with this simple cookie, though I like them plain best. 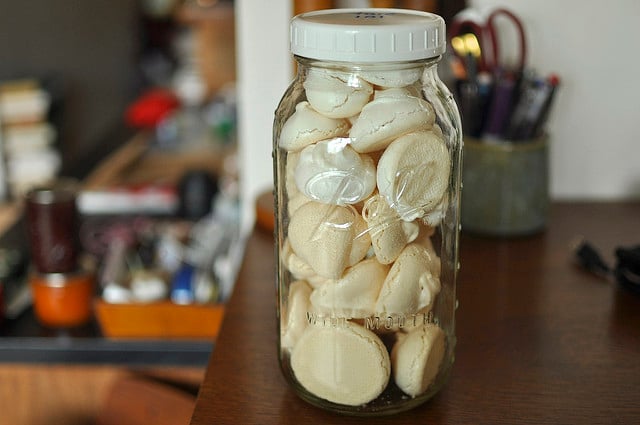 If you’re free tonight from 7:30-8:30 pm eastern time and want to talk about cookies, make sure to hop on Hungry Tigress’s Facebook page. She’s hosting a virtual party where we’ll be talking holiday baking, canning and more. She also has a bunch of terrific preserving books that she’ll be giving away, so it’s worth stopping by!