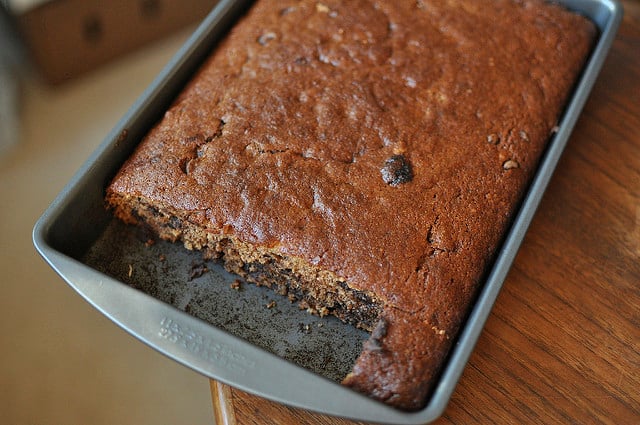 Last Monday night, in the midst of finishing my final holiday canning projects (I made a big batch of this cranberry apple jam to give to our collective co-workers and supervisors), doing laundry so that I could pack for my trip to Oregon and giving the apartment a good once-over so that I didn’t leave it in ruins, I also managed to make a batch of chocolate chip banana bread.

I had four blackened bananas in the fruit bowl and couldn’t bear to let them go to waste. I nearly tossed them in the freezer, but quarters tight in there at the moment and I’ve already got approximately 12 halved frozen bananas occupying valuable space. It was either use ’em up or let ’em go. Besides, there’s nothing so calming as a bit of unnecessary baking in the midst of holiday frenzy. It’s akin to cleaning the house from top to bottom when you’re writing a book. Of course, I wouldn’t know anything about that kind of procrastination. Nope, not me. 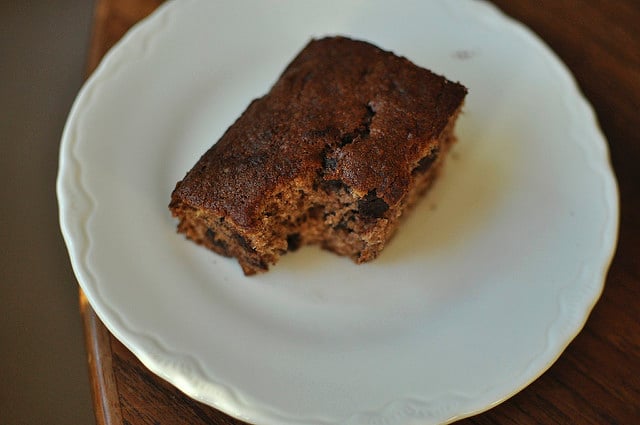 But anyway, back to the banana bread. This is a recipe I first discovered on Orangette, who adapted it from Jeannette at Everybody Likes Sandwiches, who herself altered it from a recipe entitled Willie Nelson’s Famous Banana Bread. Quite a pedigree, wouldn’t you say?

I made it three years ago, around the time Molly first published the recipe. I took it to a writing retreat and left it in the kitchen, my offering to the communal snack table. A few hours later the pan was half empty and by the next day the banana bread was present in memory only. I made it once or twice more and then promptly forgot about it. My maple banana bread became my default and I thought all was right in the my quick bread world.

But on Monday night, I wanted something easy and fast. One bowl, preferably. As I stood in the kitchen pondering my options (and wondering whether it was insane to make banana bread at all), the memory of this recipe popped into my head. It satisfied all my demands (minimal dishes, used things I had, delicious) and so I set to work.

Less than an hour later, I had a pan of lovely banana bread. The remnants are now in Oregon with me (Scott is not a banana lover, so leaving it in Philly would have defeated my “Save the Bananas” mission). My sister has been nabbing nibbles from the container since I arrived (I found a piece this morning with a perfect half-moon bite missing) and I discovered this morning that it is amazing crumbled on top of warm oatmeal.

I’m not suggesting you make this now. I know that oven space is precious in the hours leading up to Christmas (I still need to make an apple pie, a pumpkin cheesecake and a batch of gingerbread cookies). However, if you have a bit of time off in the next week and a few withered bananas, this could be just the thing.

I streamlined the recipe a bit from the one that Molly, Jeannette and Willie Nelson used. Most noticeably, I skipped the cinnamon sugar topping. I had an inkling that this bread would need to travel and I was afraid it would be too messy with a sugary topping. Truly, I didn’t miss it. However, I imagine it gilds the lily nicely, so if you want to see what topping is all about, check out Jeannette’s original posting.