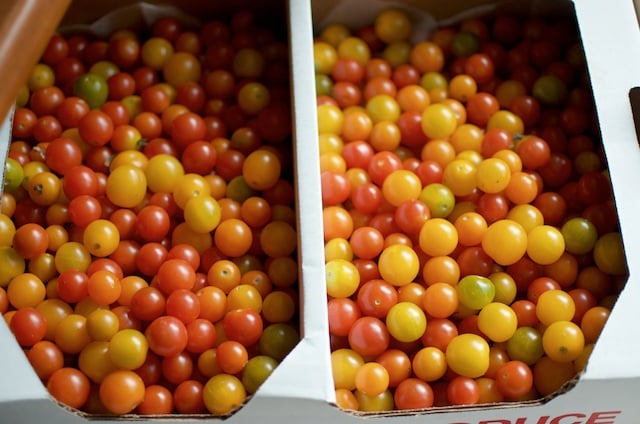 A few weeks ago, I found myself feeling anxious about the state of my tomato preserves. I’d already sauced 50 pounds of heirlooms, but hadn’t managed to get any Roma or paste tomatoes to can whole or in halves. In a frenzy only other canners will understand, I started reaching out to some of my regular tomato sources, hoping to get another 25 or 50 pounds to preserve.

In the end, I was too late. Unable to get my hands on any tomatoes appropriate for canning whole, I settled for two flats of tiny tomatoes (they were mostly grape and Sungolds) and another ten pounds of heirlooms. Not exactly what I wanted, but in the end, they managed to calm my inner pioneer. 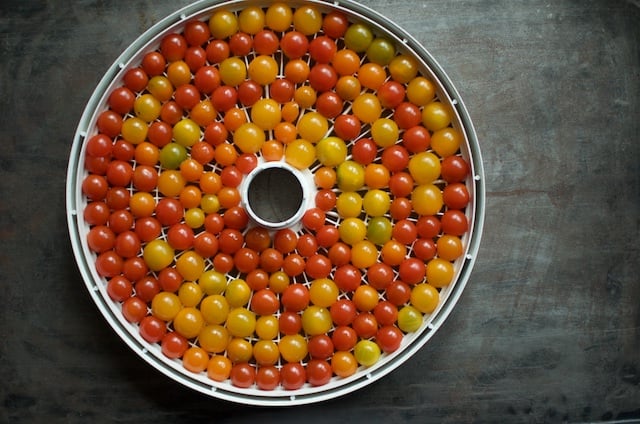 I roasted and canned the heirlooms according to Kaela’s instructions (though I included a bit more of their liquid than she does). I wound up with seven precious pints, and they will be carefully rationed throughout the winter.

The small tomatoes became three separate products. I made a batch of honey sweetened tomato jam. I roasted, milled, spiced, and simmered ten pounds into pizza sauce (more on that tomorrow). And I carefully halved and arranged the remaining eight pounds on dehydrator trays and dried them into tomato candy (two batches through the dehydrator, in all). 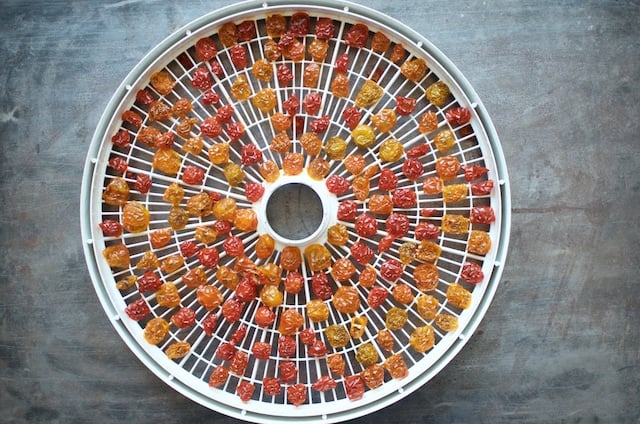 I posted pictures of my racks of drying tomatoes on Instagram and got a number of questions about how I do it and how I use them. The how is easy. I wash the tomatoes, pick them over to ensure that I don’t have any that are starting to go bad, slice them in half, and arrange them on the trays. Over the course of the next 12-14 hours, the machine does the rest (set at 135 degrees F, the suggested temp). 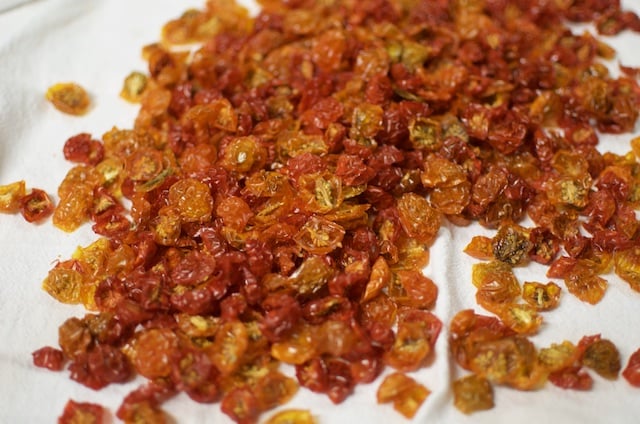 Once the tomatoes are entirely dry, I unstack the trays and let them cool. I spread a towel on the countertop and use a combination of shaking and banging to remove the from the trays. They get stored in either a jar or a zip top plastic bag and my dried tomatoes are done.

After I’ve admired them for a week or two, I start using them. I stir them into quinoa salad. I make Tara’s zucchini noodle salad. I use them to garnish soup. I make batches of savory granola and use the dried tomatoes instead of raisins. Sometimes I nibble a few while making dinner. They are always a welcome addition to my pantry and when they run out, I wish I’d made more. Such is the way of preserving.

Do you guys dry tomatoes? How do you use them?

28 thoughts on "End of Season Tomatoes and Drying Tiny Tomatoes"