Use this sweet, yeasted dough to make a batch of apricot walnut babka for now, and a batch of sticky buns that can be par-baked and popped into the freezer for another day. It’s perfect do-ahead baking for the upcoming holiday. 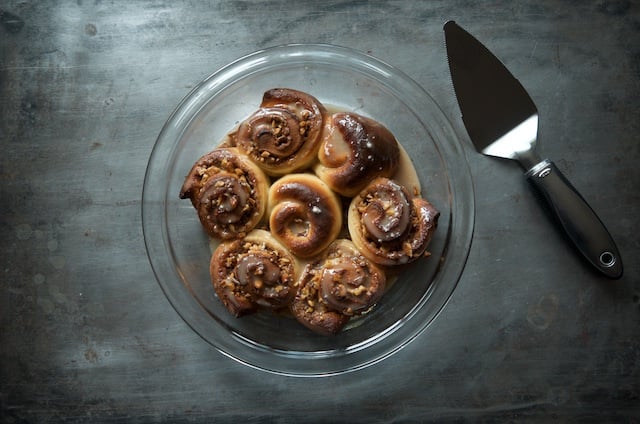 Back in November, I got an email from OXO looking for bloggers to participate in a campaign designed to feature their sturdy glass bakeware. The idea was to create something that could be made ahead, frozen, and then either baked off or reheated later. Their glassware is particularly good for these fridge or freezer to oven situations, because it’s made from sturdy resistant borosilicate glass. 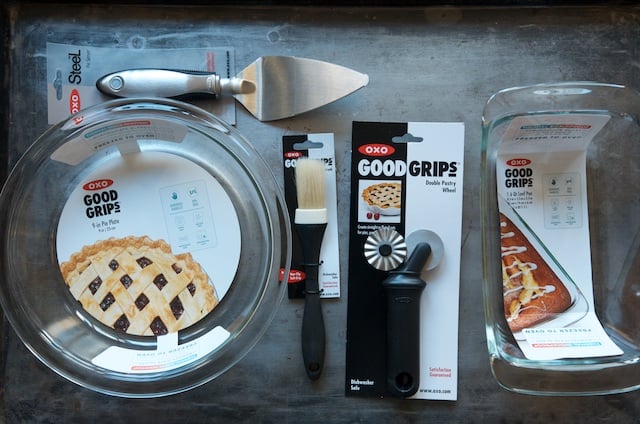 They sent out a Glass 9″ Pie Plate, a Glass 1.6 Qt Loaf Baking Dish, one SteeL Pie Server, a nifty Double Pastry Wheel, and 1″ Pastry Brush. I spent a little time pondering what I might make that would fit the assignment, make good use of these tools, and would also allow for a liberal application of jam.

What I came up with was a single dough that allowed me to both have a relatively immediate treat, as well as one to freeze and finish baking on another day. I’m calling this concept babka for now, sticky buns for later. Because who wouldn’t want that? 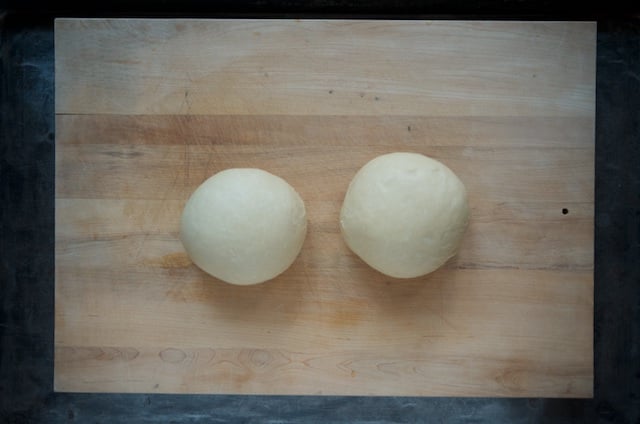 I started by searching out recipes for a sweet, yeast-risen dough. After a bit of internet searching and book scanning, I found what I was looking for in Tammy Donroe Inman’s fabulous book Wintersweet (it’s a favorite of mine for holiday baking). 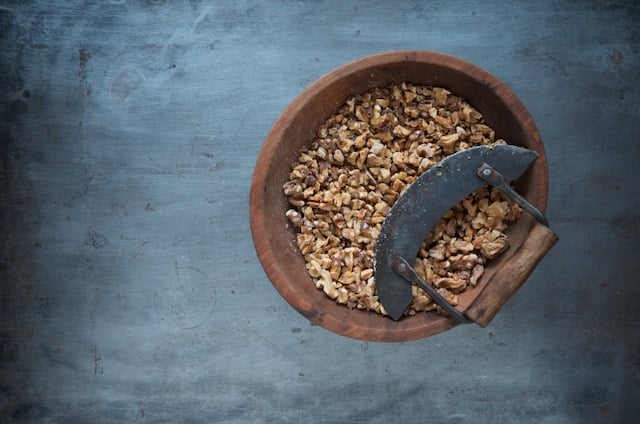 I made Tammy’s dough the day before I wanted to bake. After its first rise, I punched it down, tucked it into a glass storage container, and popped it into the fridge (a handy trick any time you need to make yeasted doughs work for your schedule). The next day, I divided it up into two balls and began to turn one into babka. I opted for a filling of apricot jam and toasted walnuts. 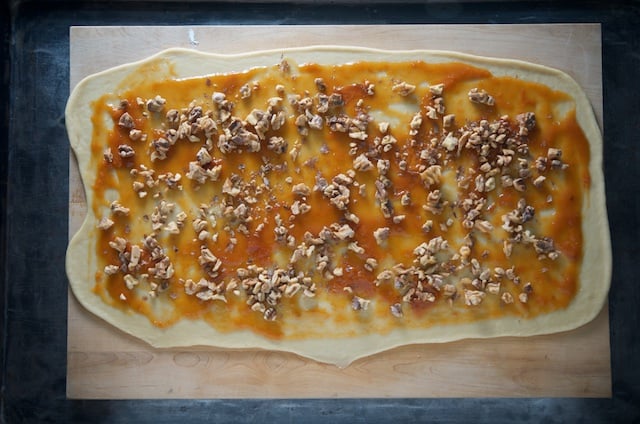 Once the dough was rolled out into a large rectangle (about 18 x 12 inches), I brushed it with melted butter, spread out a half pint of apricot jam, and sprinkled the whole things with those toasted and chopped walnuts.

As far as I can tell, the thing that makes a babka a babka is that it’s a slightly sweet, buttery, yeasted dought that’s filled, rolled, sliced and twisted. And so that’s what I did. Starting with the short side, I carefully rolled until I had a fat tube of filled dough. Then, taking a sharp knife, I cut the roll down the middle, taking care to leave the top inch (or so) intact. 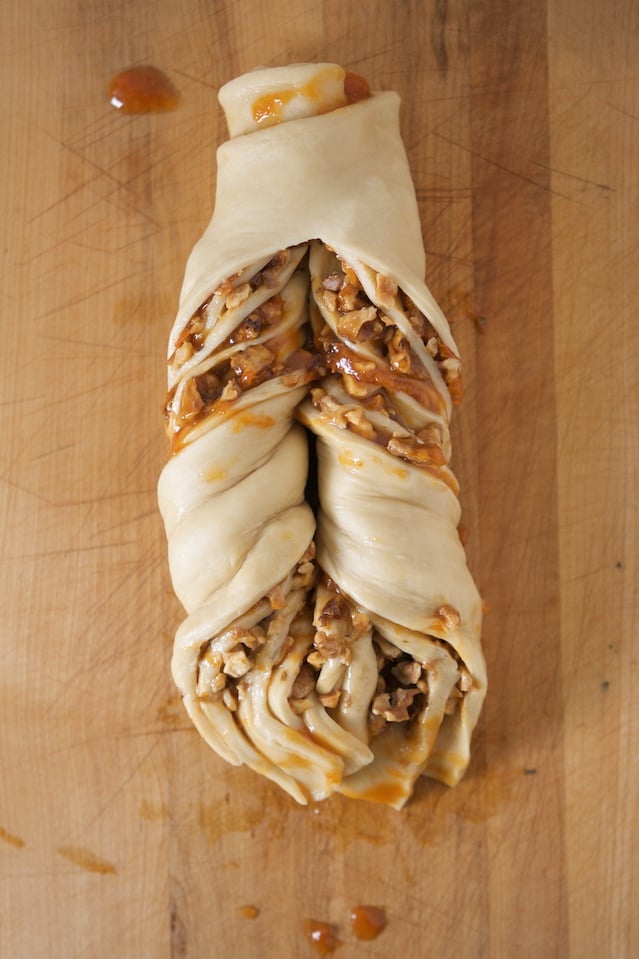 After slicing the dough, I took a deep, steadying breath, firmly grasped the two ends and twisted them outward in opposite directions. There was some filling loss, but not enough to be particularly worrisome. 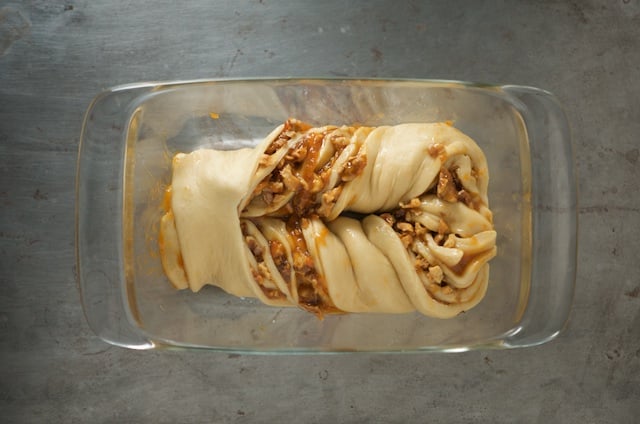 Once sliced and twisted, it was simply a matter of nestling the dough in the loaf pan and letting it rise in a warm place before baking. 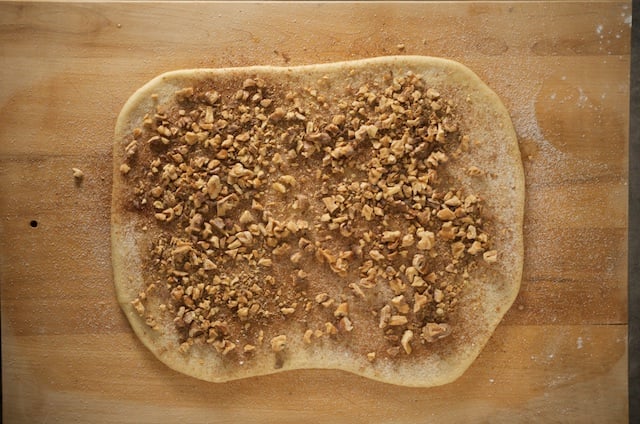 While the babka took its time rising, I turned my attention to that second ball of dough. Much like the babka, it needed to be rolled out into a generous rectangle. I brushed the dough with melted butter. However, instead of applying jam, I dusted the dough with cinnamon and sugar (using OXO’s tea ball to ensure even distribution) and used the rest of the walnuts. 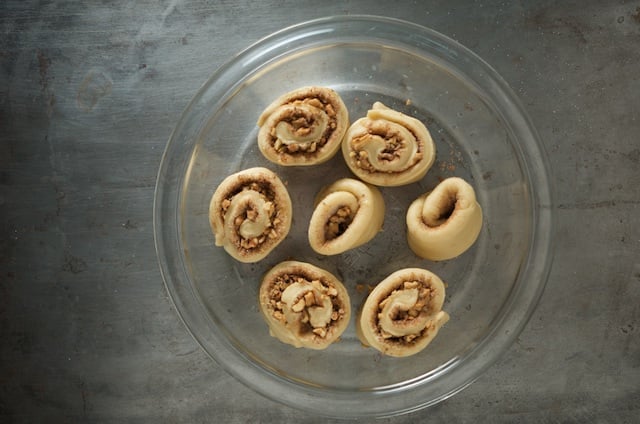 I rolled up the dough (starting with the long side, rather than the short one) and sliced it into rounds. I set them into the pie plate and let them rise (at this point, the babka was ready for the oven, since I actually ate dinner in between working with the two sets of dough). 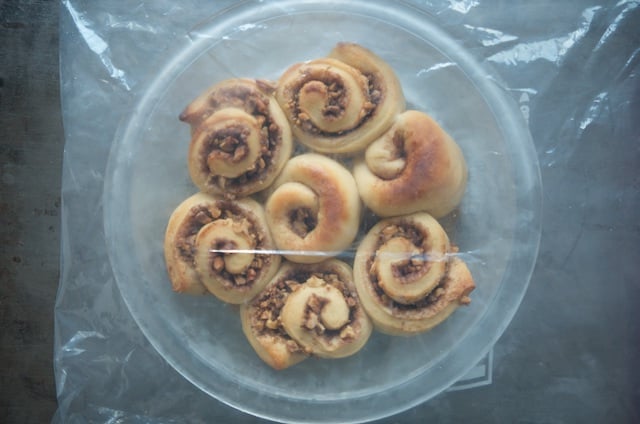 When the babka was done (it should be around 200 degrees F inside when finished. If the exposed jam seems to be getting too done, perch a sheet of foil on top of the pan) and the sticky buns had risen, I popped that pan into the oven. However, instead of cooking them to completion like the babka, I only baked them for 12 minutes. This is just long enough to get a little color and set their shape. Once they are cool, pop the pan into a big ziptop bag and nestle it into the freezer.

The night before you want to eat your sticky buns (perhaps when the babka is all gone?), pull the pan out of the freezer and make room for it in the fridge so that they can defrost slowly. The next morning, heat the oven to 350 degrees and slide in your pan of sticky buns. They’ll only need a quick 15 minutes in the oven and they’ll be ready to eat.

Brush the finished sticky buns with a little melted butter to help them stay soft, and then drizzle them with a little glaze made from powdered sugar, milk, vanilla extract, and a dusting of cinnamon. 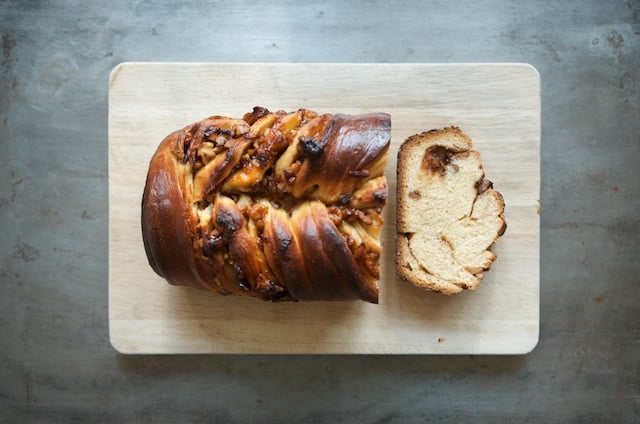 As we head into the frenzy of this week, wouldn’t it be nice to have a loaf of babka on the counter and a pan of sticky buns ready to go in the freezer? 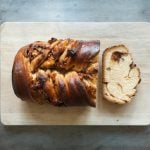 To finish the sticky buns:

The yeast dough in this recipe is very lightly adapted from Tammy Donroe Inman's book Wintersweet.