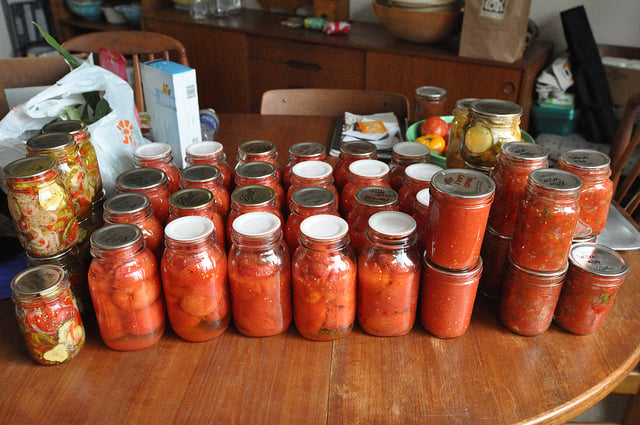 On September 1st, I picked up 100 pounds of tomatoes from a local market who occasionally places special orders for me. I had a number of recipes in mind to make with them and assumed that I’d spend most of Labor Day weekend, peacefully plowing my way through them. Of course, life never really works out as planned. I had a lovely time last weekend, but didn’t really buckle down and tackle those four boxes until Sunday night.

By the time Tuesday morning rolled around and I was headed back to work, there were still tomatoes languishing in my dining room. I peeled, chopped and preserved them Tuesday and again on Thursday. Eventually, I could see a light at the end of the tunnel.

The picture above is what has happened to approximately 60 pounds of those tomatoes. Nineteen quarts of whole peeled tomatoes (seven canned in their own juices in the pressure canner, twelve packed in water and processed in a boiling water canner). Four quarts of crushed tomatoes. Two pints of tomato sauce (the juice and some tomatoes leftover in the crushed tomato process). Seven pints of salsa (a recipe for the book). Missing from that picture are the nine half pints of tomato jam (recipe coming tomorrow) that didn’t make it out from the kitchen.

Approximately twenty pounds of the original 100 have been preserved in non-canning ways. I roasted and froze a whole bunch and also marinated and dehydrated quite a few (a technique inspired by this post from the Tennessee Locavore).

What this means is that nearly two weeks later, I still have fifteen pounds of tomatoes in my dining room (a friend happily took a few when I offered). I’m planning to make a corn salsa (another recipe to test for the cookbook) and well as Molly’s conserva. That will leave me with just a few left. Looking forward to that day.

Note: I’m sure that a few of you will notice that some of the above jars are sealed with those reusable Tattler lids that have been making the internet rounds of late. I’m planning on devoting my Canning 101 post to them on Tuesday, so please hold any questions about them until then.

45 thoughts on "What Approximately Sixty Pounds of Tomatoes Looks Like"