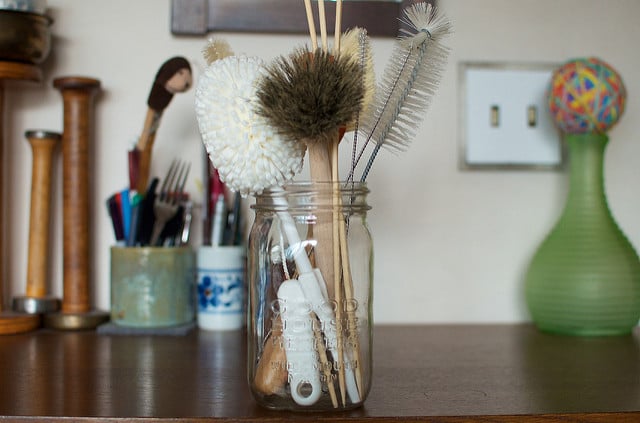 About a week ago, I pulled one of my very favorite vintage pint and a half jars out of the dishwasher and discovered a big chip in the rim. I spent a moment feeling sad that I wouldn’t be able to use it as a drinking glass anymore (my favorite application for that particular vessel), but then set about finding a new use for it.

The truth of the matter is though canning jars are incredibly sturdy, some do eventually succumb to the bumps and collisions of life. To my mind, these small chips, cracks, and hairline fractures are simply opportunities to get a little bit creative (do use your judgment here and only reuse jars that aren’t an active safety hazard). 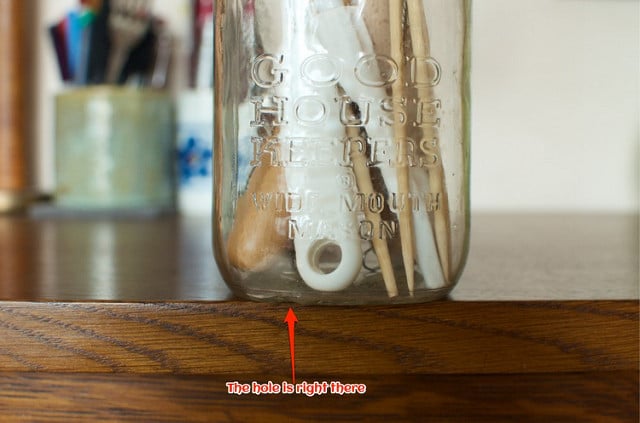 This first jar has long been a favorite in my kitchen. It was a birthday gift from my mom, sometime during my early twenties. We’d looked at these jars many times at the Antique Alley (a fabulous antique mall in the basement of a funky rental strip in NE Portland) and she surprised me with one.

One day, I went to fill it with water and discovered that it had sprung a leak. Because it was a precious jar, I didn’t want to drop it into the recycling bin. As I studied it, I realized that a hole near the base could actually be a boon if I used it as a scrub brush holder because instead of gathering water, it would drain. I used a bit of fine grit sandpaper to dull a few sharp edges and put it to work. It’s been serving in this capacity for years now and I have absolutely no plans to replace it. 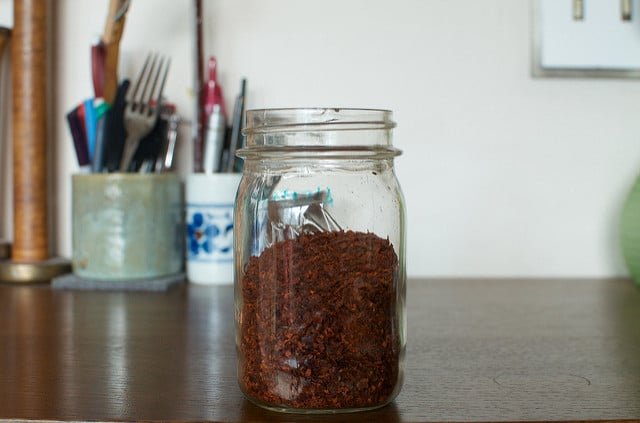 Next up is a jar with a crack in the top. The funny thing about this jar is that the rim is actually entirely smooth. You don’t know there’s a problem with it unless you look at it from the side. The crack means that the jar lets in a very small amount of air. I discovered this after canning peaches in it a few years back. The seal was perfect but the peaches turned brown. It took me a while to figure out what the heck was happening.

However, this jar makes a fabulous container for Aleppo pepper (or any other spice you tossed in it). Because there’s no sharp edge, there’s no risk in going in and out of the jar regularly. 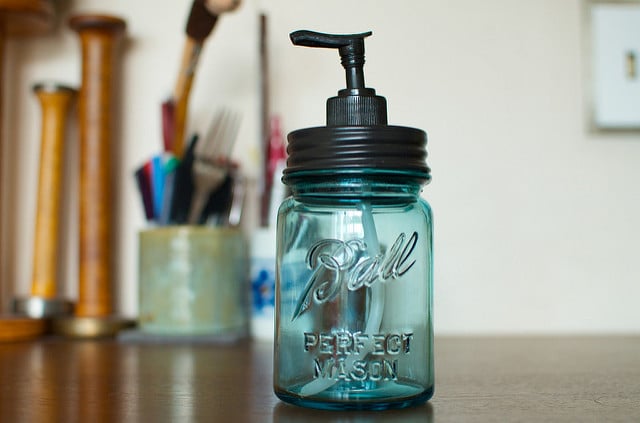 Another way to reuse a jar with a chip or ding in the rim or threads is to use it as a soap or lotion dispenser. You can either order a mason jar pump lid ready-made from a variety of internet vendors, or you can follow a tutorial (there are a bunch out there) and make one yourself. It’s a great way to extend the life of an imperfect jar, because the only times you’ll expose the broken rim is when you open it briefly for refilling.

How do you guys repurpose cracked and dinged jars?