Regular Food in Jars contributor Alex Jones is back with another post from her canning trenches. This time, she’s sharing her experience trying dry canning (aka open kettle canning) with her Canadian relatives. -Marisa 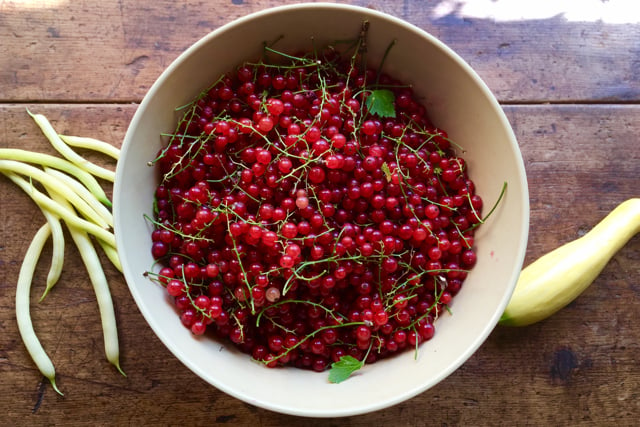 As I’m sure is the case with many of you readers, I first learned to can thanks to recipes and tips here on Food In Jars.

Marisa’s enthusiasm, knowledge, and clear, well-researched recipes and instructions have always made it easy to understand the principles of safe and delicious canning. Ever since then, I’ve felt confident in putting up seasonal produce and even developing or tweaking recipes of my own, knowing that they were based on safe, tested, well-researched information. And I’d never known anyone who practiced home preserving any other way.

That is, until I paid a visit to family in Quebec earlier this month.

My mother’s 10 brothers and sisters, as well as many of my twenty-odd cousins, still live in a section of rural Quebec sandwiched between Montreal to the north and the U.S. border to the south. I spent summers visiting there, swimming in the lake, picking berries, and getting a taste of rural life.

Now that I’m grown, I still like to pay an annual visit to the family homestead, and one of the highlights of the trip each summer is checking out my aunts’ huge, enviable vegetable gardens. (My mom seems to be the only one of the eight women in her generation who isn’t crafty, but that tendency was clearly passed on to me.)

This year, my aunt Dorothy — who grows, stores, cans, freezes, and pickles enough produce so that she barely shops for it in the winter — concluded the annual garden tour by giving my partner and I a big bowl and a directive to take a pass at her prolific red currant bush, still dripping with ruby-red fruit after several harvests and jamming sessions. Red currants being one of the few summer fruits I have trouble getting my hands on, I enthusiastically complied.

We left with two quarts of berries — but I’d have to turn them into jam before crossing back into the States or risk confiscation by the border guards, who are under orders to confiscate fresh foods like eggs and produce from travelers.

Another aunt, Patricia, came to the rescue, offering the use of her kitchen for the afternoon and even digging up some dusty Bernardin jars from the attic for me to use. But when I asked her where I’d find two large pots — one to cook the jam and one to heat the water bath — she said, “What do you need two pots for?”

After a few minutes of incredulous questions from both sides, it became clear that we had really different ideas about how to preserve this fruit.

When they put up jam, I learned, my aunts practice dry canning. This method eschews the jars’ standard 10-minute bath in boiling water in favor of heating clean jars in the oven to sanitize them, pouring a kettle of boiling water over the bands and fresh lids, filling the jars, sealing, and allowing them to cool until the seals ping.

While I was a little skeptical, I realized I’d enjoyed jam made by my aunts in this way for years before — so I let Aunt Patricia lead me through the process.

(It’s worth noting that for low-acid foods like tomatoes, my relatives will go for a water bath process when preserving, saving dry canning for only high-acid, high-sugar recipes like jam and jelly. I certainly wouldn’t have gone along with any low-acid preserving recipes that don’t stick to the standards put forth by trusted sources like the National Center for Home Food Preservation.)

After cooking the jam — using this recipe from David Lebovitz with less sugar — we filled the heated jars, topped them with the scalded lids, and waited for them to seal.

While all five of the half-pint jars I made sealed just fine after the initial cooling period, two of them have since failed, prompting a transfer to the fridge — and indicating that while good results are possible with this method, it’s less effective than a water bath, in my experience.

But otherwise, the jam looks and tastes great, three weeks later. (My aunt also stores her open jars of jam in the cupboard; signs of mold, she says, are a cue to scrape anything unwelcome off the surface and transfer the jars to the fridge. Then again, she eats jam on homemade bread almost every morning, so it probably goes pretty quickly.)

I haven’t included a recipe here, since I’m not encouraging anyone to try dry canning at home. But the experience stuck with me: So many of my crafty, foodie practices have been learned on the job or through the Internet rather than being passed down through generations. None of this was taught to me growing up by someone I knew and trusted.

I’ve never come up against resistance to contemporary techniques from anyone, let alone family who have spent a lifetime making preserves by what are now considered outdated methods. With a lower-risk recipe like jam, I just had to give this technique a try.

I might not have an acre of garden to harvest from or a my own woods in which to forage, but I was able to connect with a family tradition through this method. I don’t see myself dry canning again in the future, but I’m thankful for this reminder to learn from my elders and to better understand the way things used to be done as well as how they’re done now in my preserving practice.