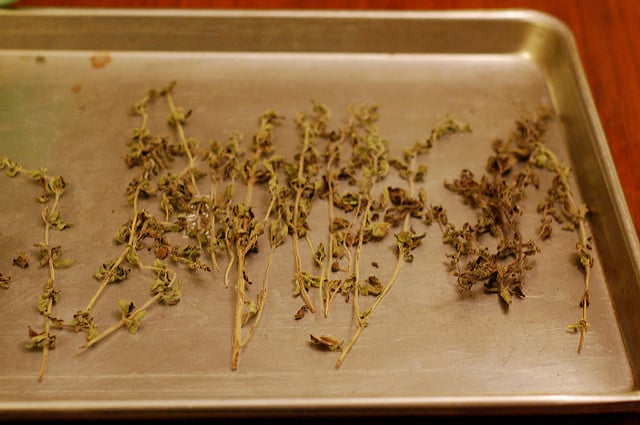 The house I was born into was a tiny little thing. Built in the early 1900s, it was just shy of 1,000 square feet. However, what it lacked in indoor space, it made up for in an amazing yard. The backyard was particularly roomy, starting with the brick back patio and rising in several tiers up to a two-story garage and back alley. We had several plums trees, as well as a vegetable garden and a long planter overgrown with Italian oregano.

The yard was often more than my parents could handle, especially with two little kids, a dog and a music production/distribution business rapidly expanding in the basement (offices) and garage (shipping department). However, they did what they could to keep nature from totally reclaiming the space, focusing the bulk of their efforts on the garden spaces closest to the house. The oregano was a particularly enthusiastic grower and had to be regularly trimmed (otherwise it would tumble out of it’s planter and take over). 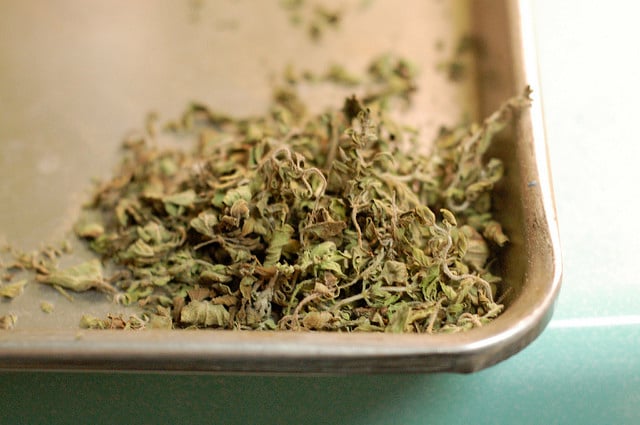 Instead of tossing the oregano trimmings onto the compost pile (which was an action that could have been forgiven, given how much oregano was back there), my mom would spread it out on cookie sheets and put them in the oven to dry. The kitchen in that house had an big old white enamel gas stove, with a pancake griddle in between the burners. Left overnight, the heat from the pilot light was enough to gently dry out the oregano. The next day, she’d carefully pull the leaves from the stems and store the dried oregano in airtight containers.

These days, I don’t have a highly productive oregano patch at my disposal. However, I do have a membership in a CSA which includes at least one bundle of fresh herbs each week. And when a recent box contained a rubber-banded bunch of oregano (the scent of which took me flying straight back to childhood) I knew I was destined to dry it. 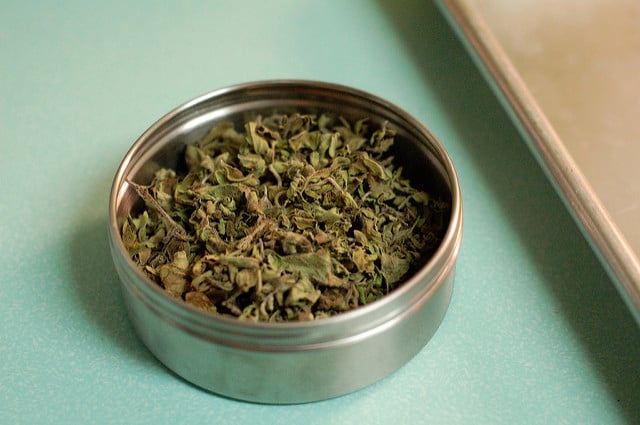 In the past, I’ve hung herbs to slowly dry in my kitchen, but often found that in my tiny galley, they get bumped and banged, leaving crunchy bits all over the floor. I also worry that in the course of their hang, they get dusty and splattered with the scents and particles of daily cooking. For all those reasons, I much prefer the quick oven dry.

To do it, you simply spread a bunch of fresh herbs out on a cookie sheet (no need to destem at this point). I put them in the oven, set to the very lowest temperature and leave them for one hour. After the first hour is up, I turn the oven off, but leave the herbs in overnight. The next day, I destem them and pack the now-dried herbs away in jars. If you have a gas stove, you could follow my mom’s method and just use the heat of the pilot light. Sadly, my electric oven precludes that practice.

This method works wonderfully for leafy herbs like oregano, thyme, mint and even basil. Rosemary doesn’t fair as well and dill gets crispy too fast (that’s one that I still hang to dry, I just do it in a closet instead of my kitchen).