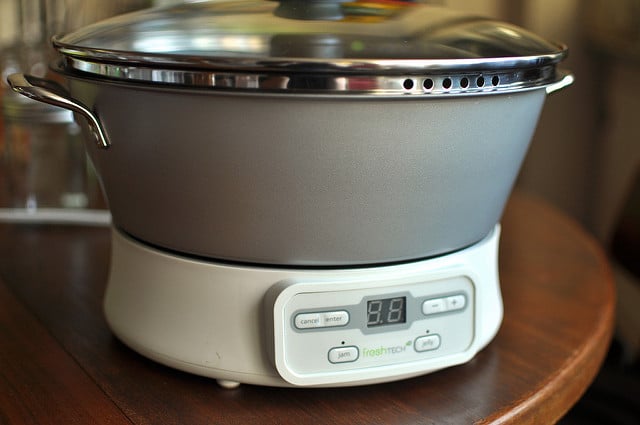 , this self-stirring pot promises fresh, homemade preserves in three easy steps.  It’s got settings for both jam and jelly and yields approximately 4 cups (that 2 pints) with each batch. 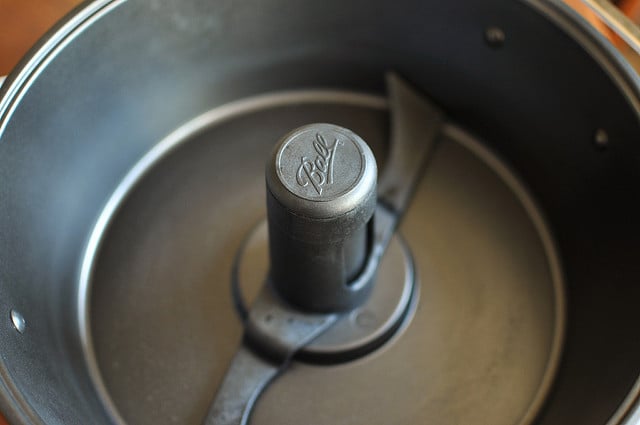 When I first heard about this appliance, I was deeply suspicious. I really didn’t see why a counter top machine was necessary to make jam when it was so easily done in a pot on the stove. However, I’m also a fan of anything that helps people get interested in canning, so I couldn’t dismiss it without first-hand experience. So, I asked the nice folks at Ball if they would send me a review unit. They did so happily and I’ve taken it for several runs this summer.

First one of my first batches in the FreshTECH

was a batch of Peach Jam. I used their Reduced Sugar recipe, because I couldn’t bear to follow a recipe that instructed me to add more sugar than fruit. However, even this reduced sugar version contains more sugar than the jams I typically make. 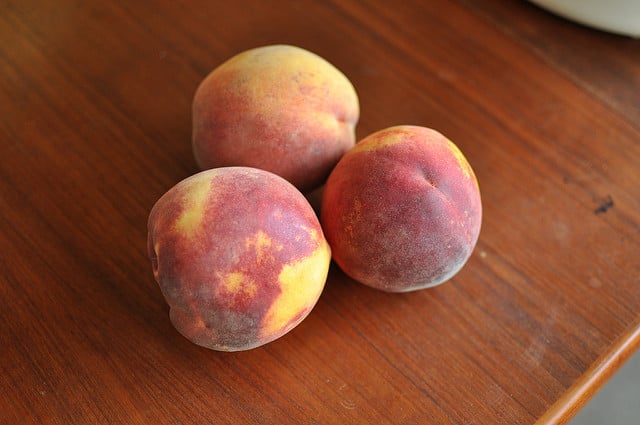 The recipe I used called for 3 1/4 cups fruit. I got that from three large peaches. This is not an appliance for those who have massive amounts of fruit to preserve. 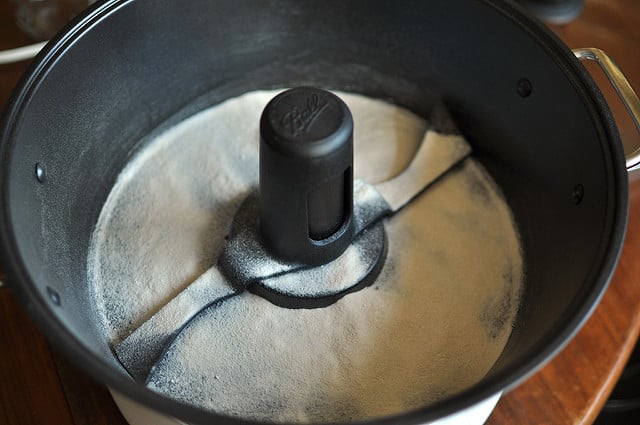 There’s a precise order to how you add your ingredients to the FreshTECH. You start by sprinkling the required pectin across the bottom of the pot. I used the traditional pectin from a canister of flex-pectin (something tells me that they designed those products to work in tandem). 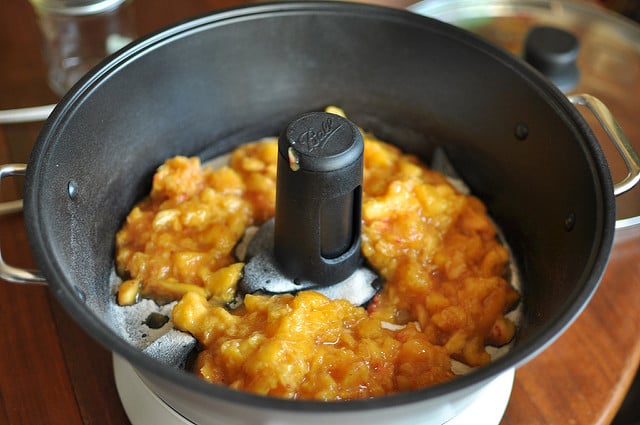 Then you spread the crushed fruit evenly over the pectin. 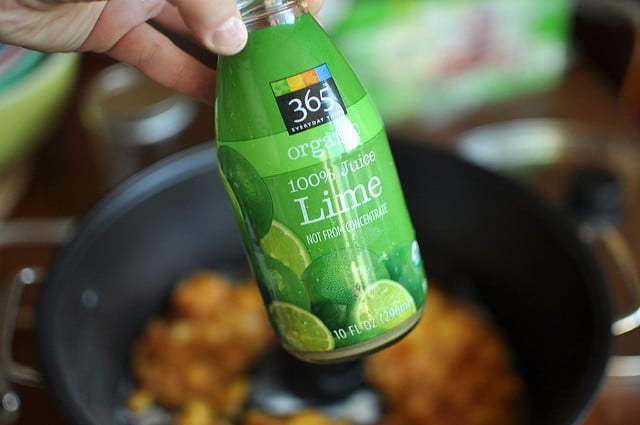 The recipe calls for bottled lemon juice, but for this batch, I only had lime juice in the house, so I made a quick swap. Since the yellow peaches I used were high enough in acid to be safe for boiling water even without the addition of lemon juice, I knew that my swap wouldn’t have any impact on the safety of the finished product (and bottled lime juice is the functional equivalent of its lemony counterpart). 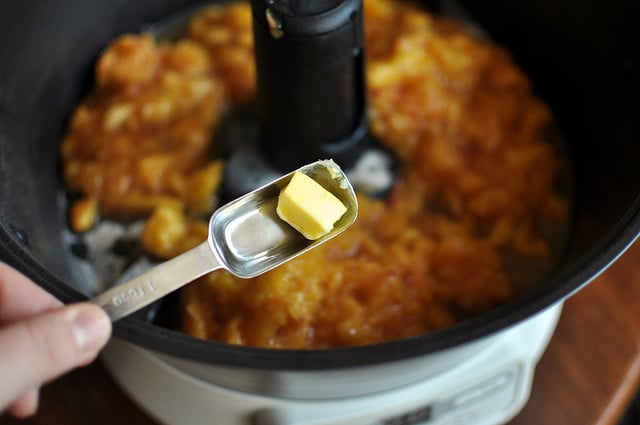 I never add butter to my stovetop jams because in most cases you can easily control foaming by using a large pot and stirring regularly. Because I was adhering to the recipe for testing purposes, I popped in the required 1/2 teaspoon butter. 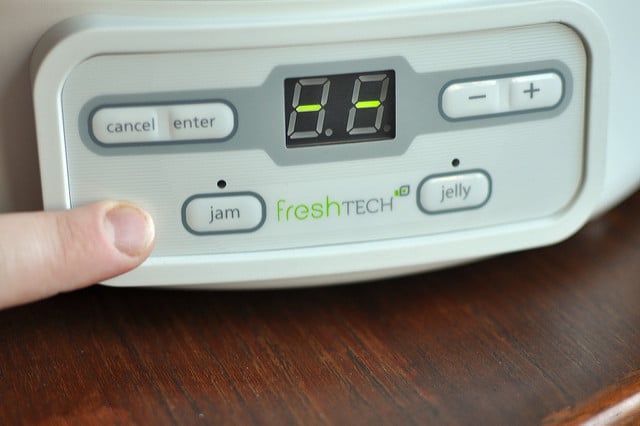 Then I pressed start. It was a very different jam making experience from my norm. 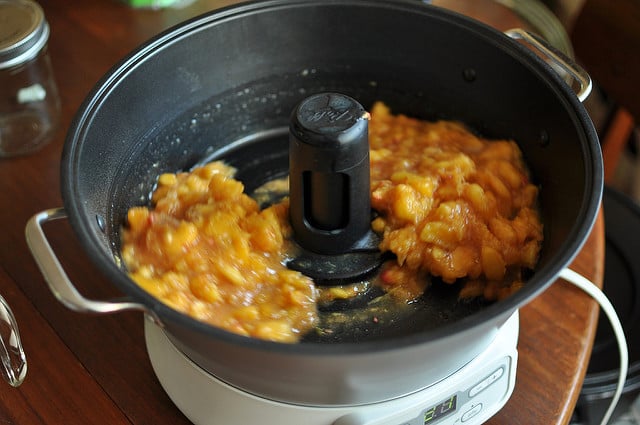 You let the pot stir with the lid off for four minutes. When the machine sounds four short beeps, you add the sugar and place the lid on the pot. 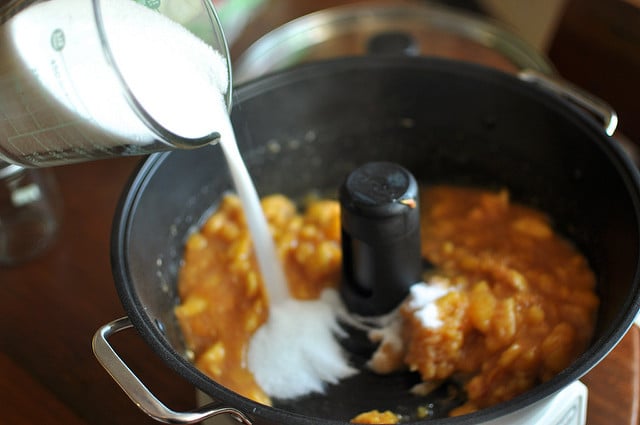 Here I am, adding the sugar. As you can see, I was oddly inspired to go all Pioneer Woman on you guys in this post. So many photos! 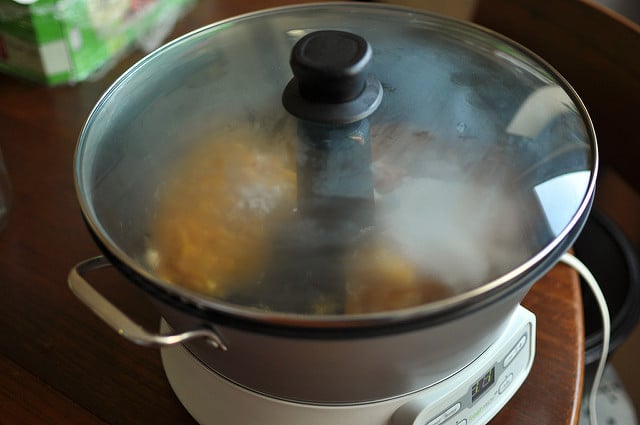 The lid fogs up while the jam cooks, though some steam does escape through the holes in the rim of the lid. 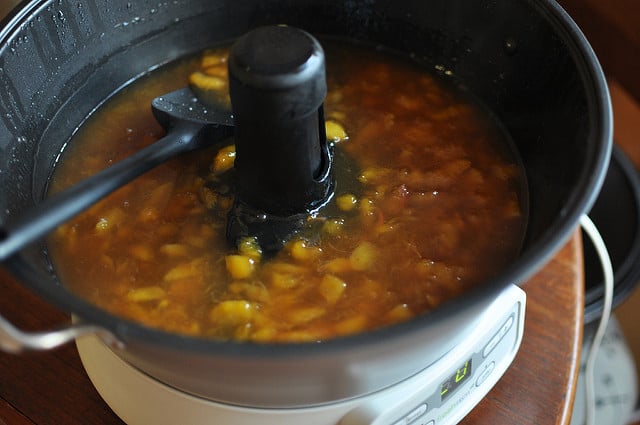 When the jam is finished cooking, it will sound a final beep. You’re supposed to press cancel to end the process and remove the lid immediately. I was distracted when that finish alert sounded, so I let my jam sit for five additional minutes before I got the lid off. It didn’t seem to do any harm.

My yield was precisely four half pint jars, which was on point with the recipe. The jam took about 24 hours to fully set up and three of the four jars are now resting comfortably in my hall closet. I opened the final jar to give it a taste. It’s perfectly fine jam, though sort of without character (in subsequent batches, I went rogue and added some cinnamon and grated lemon zest — much better).

And honestly, that sort of sums up the experience of using this machine. It makes perfectly acceptable jam. Far better, in fact, than most of the stuff that you can buy at the grocery store. But it sucks all the soul out of the art of making preserves for me. I like standing by my stove and stirring. I like watching how the bubbles change in texture and consistency. And while I do like making small batches, I like having the option of making larger batches that fill seven or eight half pint jars (all the better for holiday giving).

Still, for those of you who are just starting out making jam, this pot offers something akin to training wheels. It’s a good way to get started and find your feet in this world of homemade sweet preserves. If your life is full of distractions and you can’t manage 30 minutes being tethered to the stove but still want freshly made jam, then add the FreshTECH

to your kitchen. Though I don’t see it finding a regular place in my canning world, I really can recognize its utility for a number of folks.

Have any of you taken the plunge and gotten a FreshTECH this summer? What did you think?