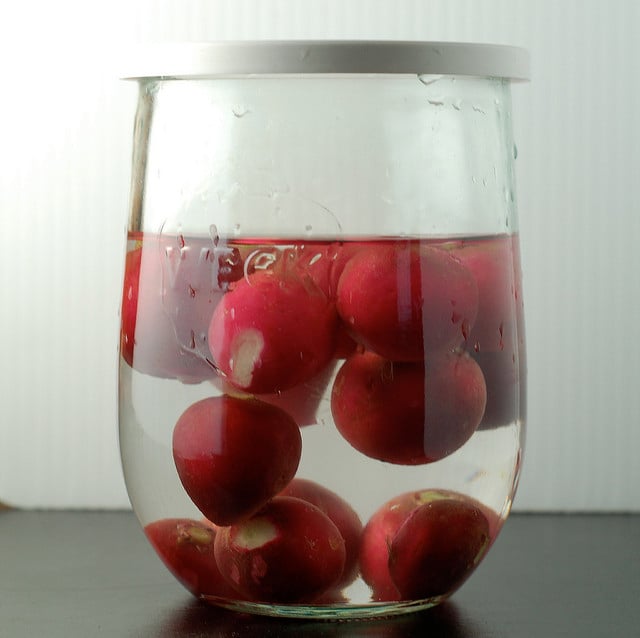 Up until a couple of years ago, radishes were something I mostly just ignored. As far as I was concerned, they were fairly tasteless orbs (except for the occasional one that was painfully spicy) that were best ignored or crunched over quickly in restaurant salads.

I was of that mind until I had my first brush with regular farmers market shopping three summers ago. It was there that I started seeing fresh radishes, with their greens still attached, in all colors of red, pink and white. At about that same time, I spotted a flurry of blog posts suggesting that radishes were best eaten with salt and butter, either straight or on a slice of chewy bread. Once I tried them that way, I was instantly hooked.

Radishes became a staple on my mental farmers market shopping list and I would grab a bunch with every visit. The one problem I found myself encountering was that occasionally, they’d lose their signature crunch before I had a chance to finish off the bundle. Happily, someone (I think it was a Slashfood reader, but the source escapes me right now) passed along a wonderfully helpful storage tip for radishes that I’ve been employing ever since.

After you do your shopping, if you know you’re not going to be able to get to your radishes right away, trim them of their greens and put them in a jar. Put enough water in the jar to cover the radishes and store it in the fridge. They’ll keep for a good 4-5 days this way without losing any of their crunch or flavor (of course, the most satisfying way to eat a radish is while holding onto the greens, like Bugs Bunny with his carrot. You will miss that particularly tactile pleasure, but it’s a small trade-off).

Or, if you really want to go crazy, you could pickle your radishes so that they’ll last far into the fall or winter… (recipe coming soon).