This rhubarb chutney is a glorious way to preserve those ruby stalks for later in the year. Serve it with crumbly cheddar, grilled meat, or roasted vegetables.

After going completely crazy for rhubarb back in the spring, I took a bit of a break from it in June (with all the other summer fruits and vegetables coming into ripeness, there was plenty to keep me occupied). However, during that fallow time, I still had rhubarb that needed to be used, tightly wrapped and tucked into the bottommost corner of my left-hand crisper drawer. When the 4th of July weekend rolled around, I decided to have a weekend of many canning projects. I made multiple batches of pickles (bread and butter & dilly beans) and jams (apricot), and finally did something with that neglected rhubarb.

Though the ends of the stalks were a bit worse for the storage time, the rhubarb was still in acceptable shape and more than good enough to be turned into something wonderful. Back when I made that batch of grape catchup (has anyone tried that recipe? It’s okay if you haven’t, it is sort of a weird one), I also noted two rhubarb recipes in close proximity. One was a recipe for rhubarb butter and the other was a rhubarb chutney. I headed into my canning extravaganza with every intention of making the butter, but on that Friday night, when I finally got around to dealing with the rhubarb, I had just finished making six pints of apricot jam, and I was weary of all those sweet notes.

My fingers flipped to the chutney recipe and wouldn’t you know, I had every single ingredient the recipe called for right there in my kitchen. It was fated (or I have a ridiculously overstocked kitchen. I think Scott would argue for the latter) and so I made chutney from my beloved New York Times Heritage Cook Book.

Thing is, I don’t really come from chutney people. We McClellans like our condiments just fine (I grew up dipping steamed broccoli in mayonnaise and roasted potatoes in mustard), but my mother has never been a sweet-and-savory-in-the-same-bite kind of person, so I grew up unaccustomed to the ways in which a good chutney can transform a dish. And I must say, this simple recipe is fairly transformational (at least for this chutney innocent).

It’s quite tasty (although I think if I make it again, I’ll make it just a bit spicier) and I have plans for it to encounter a nice slab of chevre sometime in the very near future (my latest party trick, when called upon to bring a contribution to a potluck or evening of in-home drinks with friends is to bring jam, goat cheese and crackers. It is so simple and people are completely impressed). If you’ve got some rhubarb to use up and you are tired of jams, cobblers, slumps and crisps, this is a good way to go. 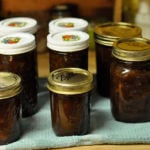