These pickled cranberries are ideal for the holiday season. The berries are perfect for serving with roast meat or with a charcuterie plate, and the brine is delicious in cocktails (or a glass of sparkling water).

I am a devoted to the belief that when it comes to holiday giving, a homemade gift (preferably edible), is best. I come by this attitude honestly, as my parents have a tradition of pairing my mother’s homemade jams with quart jars of my dad’s famous pancake mix to share with their friends, family, and neighbors.

I’ve been filling little flat rate boxes to send off some of my favorite far-flung people, and when my local family gathers on Saturday for our annual Hanukkah party, I’ll be carrying a sturdy crate full of jams and pickles so that everyone can pick their favorite.

This post was initially written in partnership with Ball Canning to share a seasonal recipe as part of their 25 Days of Making and Giving campaign. However, that campaign is long since over, so I’ve revised this post to focus on the best part. These pickled cranberries.

I initially wrote a recipe for pickled cranberries back in the days when I was writing about pickles for Serious Eats. However, I’ve found that the yield wasn’t perfectly consistent and readers sometimes struggled to find some of the ingredients I called for.

This new and improved version makes exactly 4 pints of preserves (which you can either can in pint jars, or spread across half pints, for an increased gifting yield) and uses things you should be able to get at the grocery store or local spice shop.

The finished pickled cranberries are a lovely thing to serve alongside roast meat or with a cheese plate, and if you’re going to pack it up in a box to ship across country, I highly suggest that you include a note telling the recipient to stir the liquid into sparkling water or a gin and tonic. 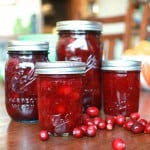