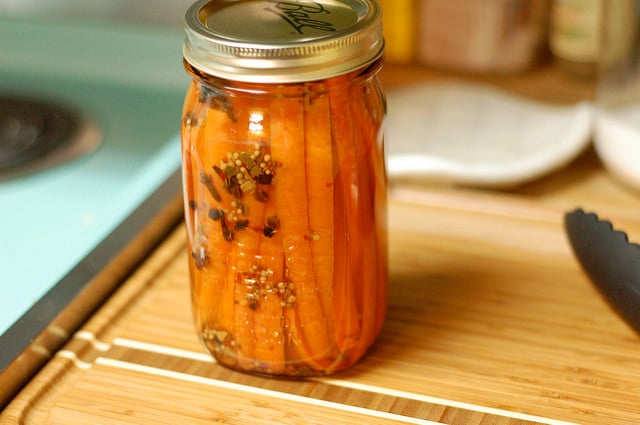 Back when I made the pickled asparagus, I ended up having some brine leftover after I filled the jars. Not wanting to be wasteful, I poured what remained into a quart jar and shoved it towards the back of the fridge, to use another day. Over the weekend, I finally put it to good use.

I trimmed and quartered a pound of carrots, blanched them briefly (for no more than 15 seconds, as I didn’t want them to lose their crunch) and packed them into a wide mouth quart jar. Then I brought the brine to a quick boil and poured it in on top of the carrots. Several days later, they are piquant and a little bit spicy (I tucked a long red pepper into the jar along with the carrots). 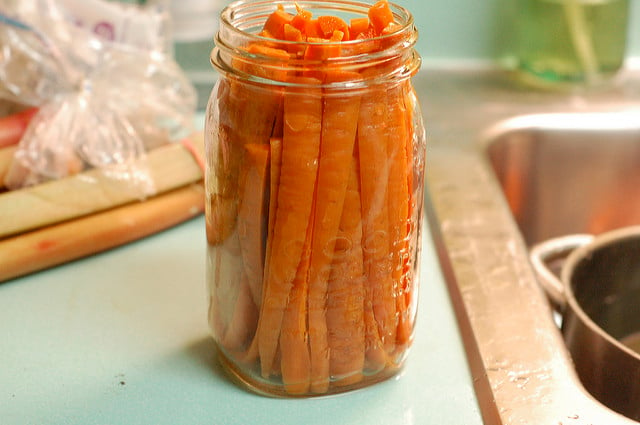 I did not do a hot water process with these pickles and instead chose to keep them in the fridge. I did this for several reasons. The first is that it’s not advisable to use reboiled brine for shelf-safe pickles. Part of the reason that pickled vegetables are safe to eat after a hot water process is that the acidity of the vinegar keeps the nasty bacteria at bay. Regular canned vegetables, the ones that aren’t pickled, must be pressure canned to be safe. I knew that my leftover brine was plenty vinegary in terms of making my carrots taste amazing. However, I didn’t know whether the level of acidity was adequate in terms of keeping those carrots shelf-safe. So I decided to go the safe route, skip the water bath and opt for refrigeration as my means of preservation. 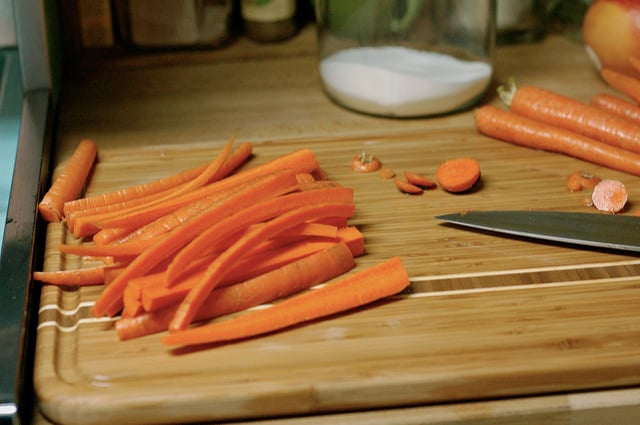 Additionally, sometimes I just want to make pickles, without hauling out a canning pot. Making a single jar with some leftover brine means that I can do just that. It took all of ten minutes to make those pickled carrots and now I have something delicious to go with soup, a sandwich, salad or just munched alone (and since the pickled asparagus I made a few weeks back is long gone) for the next week or so.

For those of you who don’t have some extra brine sitting around your fridge, here’s a quick formula for making a small batch of brine, so that you can make just one or two jars of pickles at a time.

I know it reads like a lot of steps to follow, but really, it takes no time. So go pickle something already. 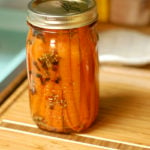 A palmful (each) of at least a few of the following:

46 thoughts on "Pickled Carrots and a Quick Brine Recipe"