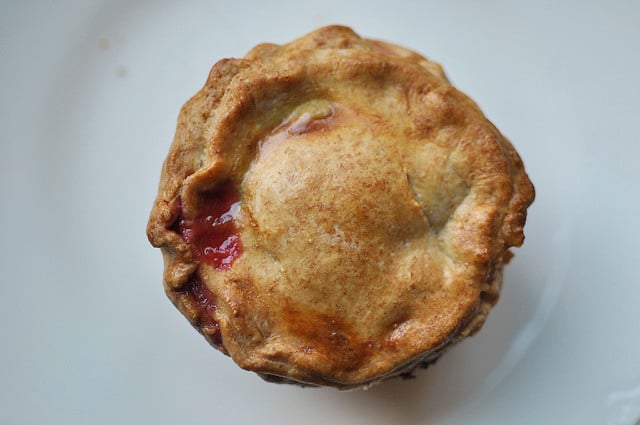 Recently, I found myself in the possession of a flat of cherries. Half sweet and half sour, I spent several days binging on cherries and finding various ways to put them up. I made jam with some of the sours, turned others into that no-cook sour cherry syrup and finally stashed four pitted cups in the freezer for another day.

I intended for that other day to be July 4th, but like so often in my life, I’m a day late (though hopefully not a dollar short). Scott and I had a couple friends over yesterday to swim in the pool on our roof and then dig into an indoor cookout. We had burgers, hot dogs, chicken sausage, potato salad, coleslaw, and grilled zucchini. It was quite a feast and in the activity of getting the rest of the meal made, I didn’t manage to make the pie (I also make five pints of dilly beans and nearly six pints of salsa yesterday, so it wasn’t as if I was lazing). 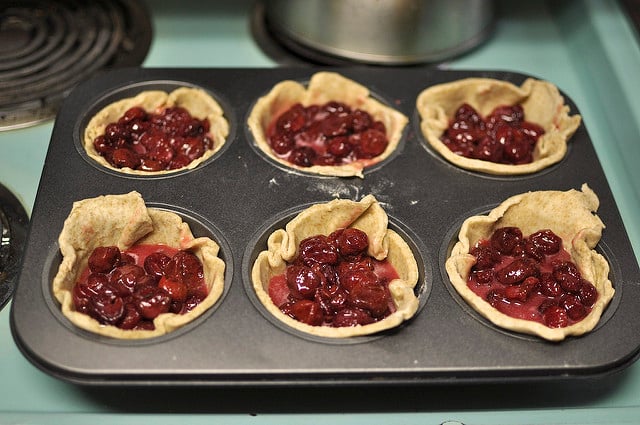 But wanting to post a contribution to Shauna’s Pie Party, the first thing I did when I got home from work today was pull out my previously prepared pie crust to soften (I got so far as making the crust yesterday) and mix my defrosted cherries with a bit of sugar and flour.

One of the challenges that comes with making pie in my household is that my husband isn’t into fruit and so won’t help eat a pie (not even one as delicious as sour cherry). I am not capable of eating enough of any single pie in a timely fashion to make it worth making. So I determined to make small pies that could be frozen. I pondered forming them into jars like so many clever folk have done, but it’s canning season and I can’t spare the jars. 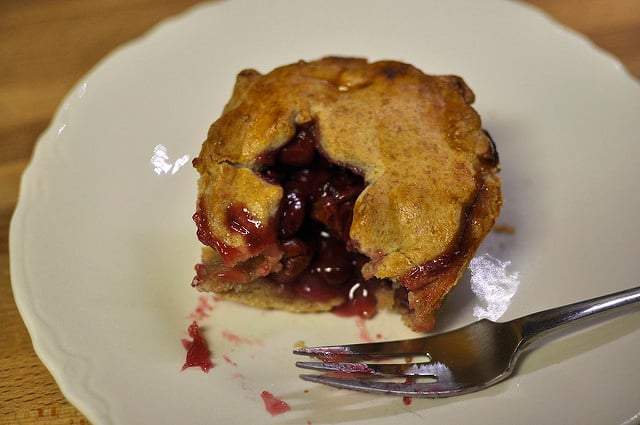 Instead, I used the large, six-cup muffin tin that Scott brought this to our marriage (it’s not a piece of equipment I would have bought on my own, but I find I use it all the time) and formed the pies into its wells. I tried to be creative in the ways I slit the top pastry, but by the time I was forming those lids, I’d overworked the dough and the gluten was making things too elastic to cut easily. I traded creativity for expediency and just cut slits.

They baked for approximately 40 minutes at 375 degrees. They bubbled beautifully and tasted like pure heaven (oh sour cherries, how did I survive my first 27 years without you?). A rough recipe is after the jump. 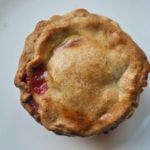 22 thoughts on "Personal Sour Cherry Pies for the Pie Party"