Make a batch of mulled apple cider syrup to keep in your fridge. You’ll be ready for festive sparkling drinks all season long.

This post is sponsored by the makers of Ball® home canning products.*

Between fertility treatments, being pregnant, and time spent nursing, it’s been over than four years since I’ve had more than a tiny sip of alcohol. In that time, I have developed a deep appreciation for syrups, shrubs, and other flavorful mixers that can bring easy interest to a glass of sparkling water.

When my friends at @ballcanning asked me to come up with something festive for the holiday season, my thoughts immediately landed on sharing my favorite mulled apple cider syrup. Combined with sparkling water and served in a Ball® Flute Pint Jar, it is fun, refreshing, and decidedly celebratory.

Combine a half gallon of fresh apple cider in wide pot. Add some mulling spices. I used cloves, star anise, allspice berries, and cinnamon, contained in a tea ball for easy removal. Then bring it to a boil. You want to stay close as it comes up to a simmer, in order to skim the foam that will build on the surface. Once you’ve removed the foam, allow the cider to boil down for 45 to 60 minutes. You want the cider to reduce until you have about 12 ounces.

When it has reduced sufficiently, let it cool in the pot until room temperature. Once cool, pour into a Ball® Snowflake Keepsake Pint Jars, cap with a Ball® Leakproof Storage Lid, and refrigerate until you’re ready to use it.

When you’re ready to build your drink, gather the syrup, a Ball® Flute Jar, and some chilled fizzy water. Fill the jar three-quarters the way with sparkling water. Add a healthy dollop of apple cider syrup and a generous spoonful of pickled cranberries with their liquid. Stir to combine and add more sparkling water to fill the jar (you don’t want to add it all at the beginning because it will certainly bubble over while you’re mixing).

Here’s to fun, alcohol free drinks! I hope you all have a very happy new year! 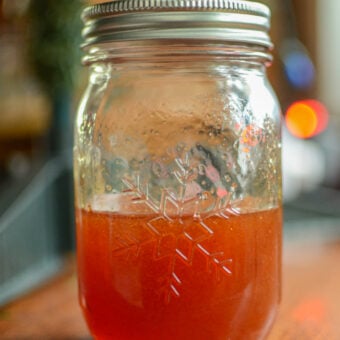 *Disclosure: This is a sponsored post that is part of an ongoing partnership with the Fresh Preserving Division of Newell Brands. They have provided jars, equipment and monetary compensation. All thoughts and opinions expressed remain my own.