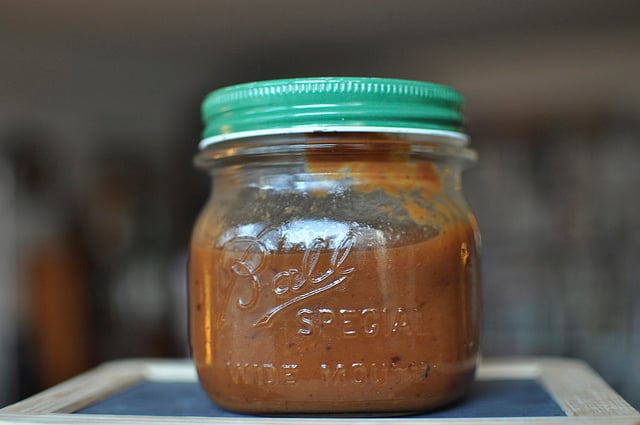 About a week and a half ago, I found myself in something of a fruit predicament. There were peaches and nectarines* from the folks at Sweet Preservation that needed to be used. I had pre-chopped plums and pears leftover from a wacky little freelance project. And two bruised apples.

Not having the mental fortitude to devise a fancypants jam or two to take care of that fruit, I did what I often do in a pinch. I chopped it all up and threw it in the slow cooker (I did take the time to peel the peaches and apples. Happily, the peaches were so ripe that their skins just slid right off). Lazy preservation at its best.

I have talked at length about my slow cooker butters in the past so I won’t rehash the minutia here, I’ll just hit the high points. I filled a five quart cooker with chopped fruit. I cooked it with the lid on for a couple of hours to soften the fruit and then pureed it with an immersion blender. Then it was my standard lid-propped-on-the-spoon and cooking it overnight game.

The next morning, the butter was done. After a quick taste, I doctored it with some maple syrup and 1/4 cup of Stevia in the Raw** and called it done. Packed into pints and processed for 15 minutes, I think my fruit butter work may well be done for this year.

Let’s talk about the stevia for just a moment. From what I understand, it’s a naturally occurring non-sugar sweetener that is derived from an herb. Stevia in the Raw has been processed and granulated to make it easier to cook with.

What I’ve found in working with it is that while it works as a sweetener, it can have something of a bitter taste unless paired with sugar, honey or some other conventional sweetener. Thus the tandem addition of stevia and maple syrup to my butter. It works particularly well in fruit butters because they are not products that needs sugar in order to achieve a set. I’m going to keep working with it and will be reporting back more as I integrate it into future preserves.

*The bulk of the nectarines went into this pickled nectarine project I did for Serious Eats last week.

**I received a free package of Stevia in the Raw from the company to try it out. As always, opinions are all my own.