How to Make Homemade Maple Cream

Regular Food in Jars contributor Alex Jones is here today to share her family recipe for homemade maple cream. She transforms some real maple syrup into a gorgeous, spreadable cream that is perfect for your morning toast or a holiday cheese board. If this post doesn’t want to make you leap up and head to the kitchen, I don’t know what will! -Marisa 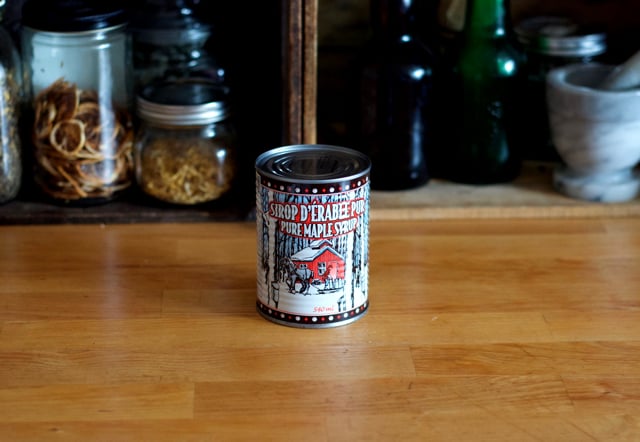 I have a confession to make: I’m a maple snob.

Growing up, my house always had real maple syrup to top pancakes, French toast, and ice cream. I didn’t even know that “pancake syrup” (typically an artificially flavored, corn syrup-based imitation of the real thing) was different from what my family used until I was a teenager, when I unwittingly poured it all over my breakfast at a friend’s house after a sleepover. Imitation just doesn’t compare.

We kept real maple syrup in the house not just because it’s incredibly delicious and we could to afford it, but because my mother’s family in Quebec would have disowned her — or sent a care package — if we hadn’t.

As an American-born cook with Canadian dual citizenship, maple syrup is part of my culinary heritage. My gaggle of aunts up Quebec, whose preserving habits and big gardens I’ve written about before, always give me a can of sirop d’erable pur to take home on my visits — if not a coveted bottle of homemade maple syrup, the really good stuff boiled down over a wood fire in my uncle’s sugar shack.

And just about the only thing more delicious than maple syrup is maple cream, a spreadable, velvety smooth maple reduction with a super-concentrated maple flavor. When I spied a spare can of syrup in my pantry while hunting for another ingredient, I decided to try making this pricey, hard-to-find treat myself. 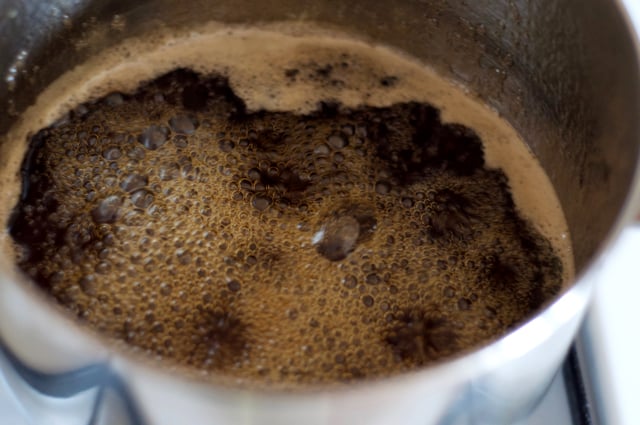 The good news is that maple cream, also called maple butter, is very simple to make. It requires just two ingredients, maple syrup and a tiny dab of butter, cream, or oil. Equipment-wise, a sturdy saucepan with high walls, a wooden spoon, a silicone spatula, a bowl of ice, a candy or instant-read thermometer (my preference), and a jar are all you need.

To make homemade maple cream, simply heat your maple syrup over medium (not medium-high) heat — no stirring, just checking the temperature. Keep a watchful eye on the pot during this recipe, as your hot syrup could boil over in an instant. 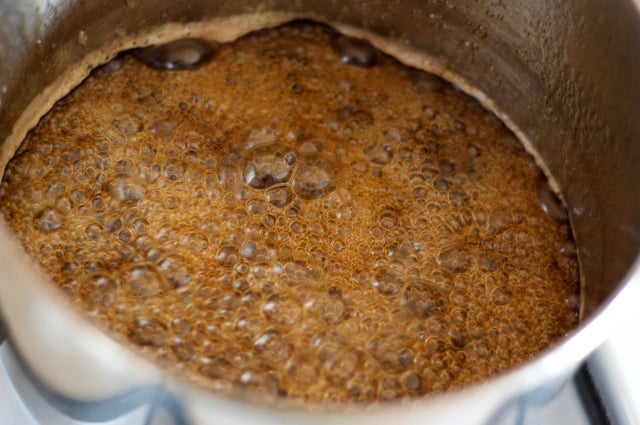 Once the syrup reaches 235oF, place the pot directly into a large bowl containing ice cubes and water. Allow the mixture to cool to 100oF (this will happen more quickly than you think). Then simply remove the pot from the ice bath, grab your wooden spoon, and stir the thickened maple syrup. 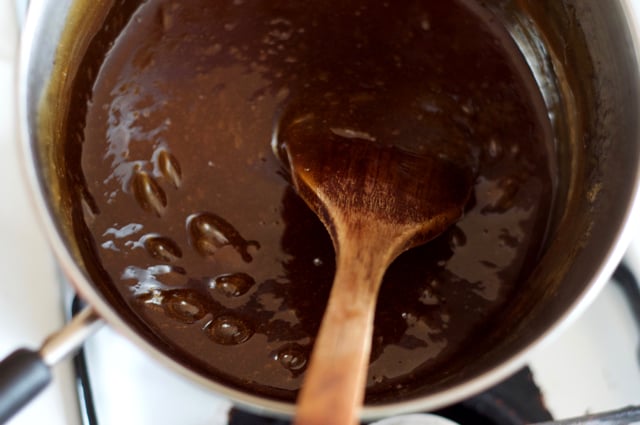 And stir. And stir some more — for up to 30 minutes, by hand, as constantly as you can. I recommend switching hands frequently, using a pot with a long handle that you can grab for leverage, and gripping the pot between your knees so you can stir with one hand while giving the other a break. Or make sure a willing accomplice is around when you set out to make the recipe and trade off when your arms get tired. 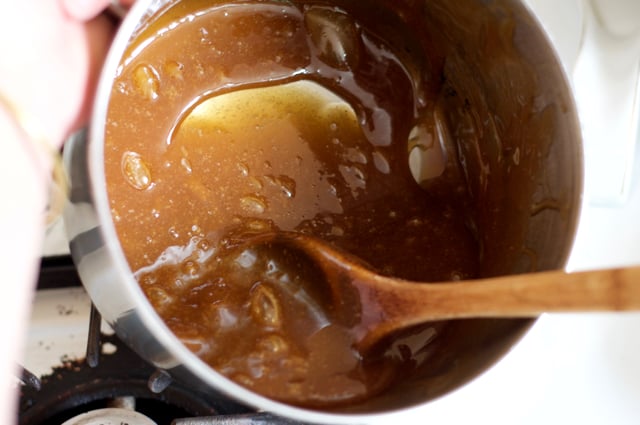 You’ll see the maple cream lighten as you stir; eventually, it will become the color and texture of nut butter, and you can finally stop. The first photo of the mixture with the wooden spoon is the cream after 10 minutes of stirring, the second after 20, the last when it’s finished. I still managed to take some quick snapshots of the maple cream during this time, so a moment or two of rest here and there is ok.

At the end of the marathon of stirring, you’ll be rewarded with utterly smooth, ultra-maple-y cream that you can spread on bread, pancakes, waffles, cookies, crackers, pretzels, apple slices, whatever. I may have enjoyed it with nothing but the spoon. 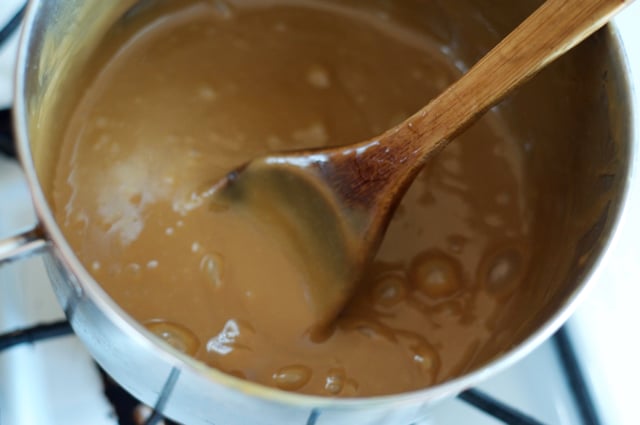 As soon as the maple cream reaches that tahini-colored stage, pour it quickly into your jar or jars. I can see this being perfect for a four-ounce gift size, decorated with some twine and maybe a colorful fall maple leaf, if you’ve got a tree growing nearby. 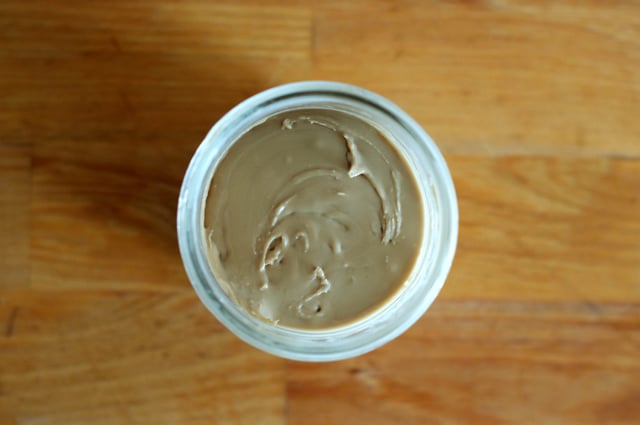 A note about the stirring: while I encountered some recipes that said that homemade maple cream could be made with a stand mixer — a tempting prospect after just a few minutes of stirring by hand — it’s dissuaded by other sources, such as America’s Test Kitchen, which cautions that you may burn out your mixer’s motor churning maple cream for up to half an hour.

Not wanting to break my beautiful Kitchen Aid, I decided to give my arms a workout instead. If you feel up for the risk, you should be able to use a stand mixer with the paddle attachment for the stirring step, but be sure to monitor carefully so that you don’t overmix and miss the window to fill your jars while the mixture is still pourable. 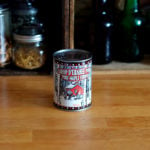 10 thoughts on "How to Make Homemade Maple Cream"