Homemade Granola for a Bake Sale 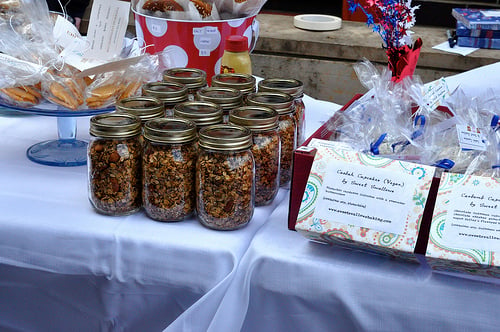 My mom was something of a reluctant hippie. Free love wasn’t her thing, recreational drugs didn’t float her boat and she missed Woodstock by a hair. Ticket in hand, she came down with the flu two hours before her ride was coming to pick her up. However her brown hair was kept long and straight, she religiously dabbed patchouli oil on her pulse points and, in 1970, she married my dad in a handmade dress on a hilltop overlooking San Francisco. 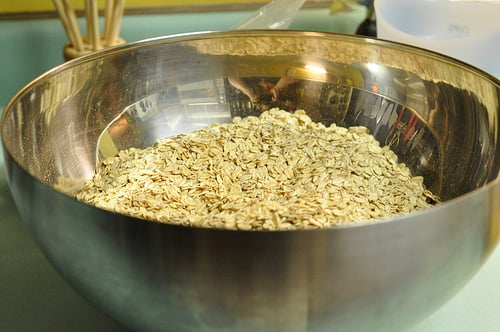 My dad embraced the sixties counter-culture with a bit more passion. He dropped in and out of college, played folk music in smoky coffeehouses, conscientiously objected to the Vietnam War and, on occasion, lived in his Volkswagon (it had a giant God’s Eye painted on the back). 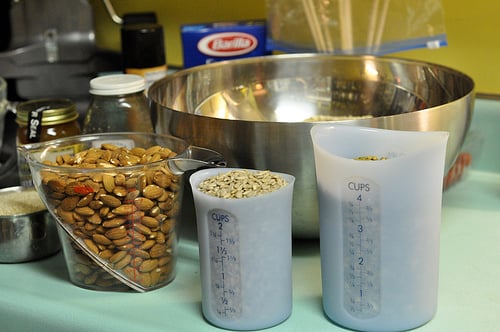 During their Santa Cruz years, they kept chickens in their backyard and watched their pennies (my mom can still recite her weekly grocery list from those days and knows exactly how much a pound of chuck steak cost in 1973). She briefly ran a toy store called Joyful, Joyful and sometimes cooked for a local Headstart program, making lunch from scratch for over 100 kids and adults with little or no help. My dad went to school, kept playing music and repaired cars on the side. 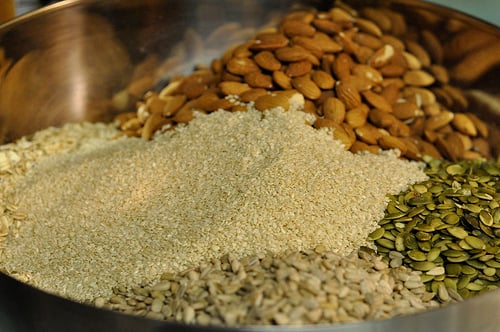 During most of these early years, they always a jar of nutty, homemade, wheat-germ fortified granola on the countertop. It was cheap and easy to make, and even a small bowl had the power to keep you full for hours. The original recipe was cribbed from a friend, who made it in industrial sized batches and sold it around the Bay Area. 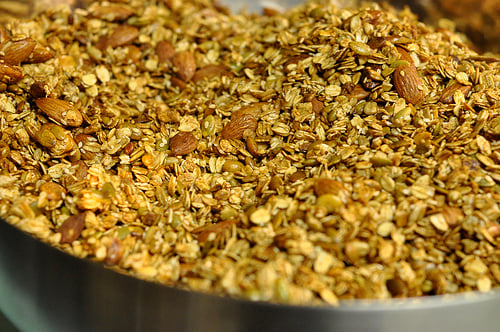 I offer these details as my granola credentials. I come from people who know and enjoy their granola (or GORP, as the original recipe was called). I’ve made many a batch in the last 10+ years and have learned a number of things from the repetition.

I like a two to one oat to nut/seed ration the best. Additional oil is unnecessary (although I still recommend greasing your measuring cup before pouring brown rice syrup or honey into it). Toasting the sesame seeds a little before adding them to the mix ensures that you won’t end up with an occasional mouthful of bitter. Always wait to add dried fruit until the toasting process is complete. And most importantly, it’s okay to adapt a recipe to your audience. 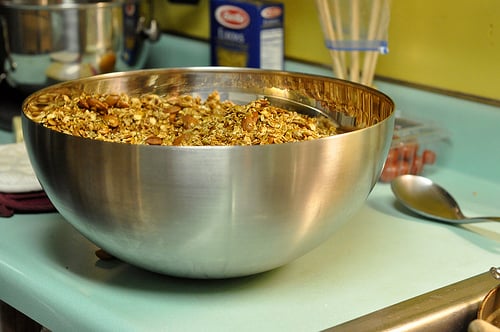 These days, I make a fairly plain batch. Sometimes I flavor it with cinnamon, sometimes with vanilla. I always leave the dried fruit out (Scott is not a fan). It’s a whole lot easier for me to add a palmful of dried blueberries or raisins to my serving than it is for him to pick them out after the fact (and far less wasteful). And best of all, it stores beautifully in a jar on the countertop.

The reason for the large batch you see above was that I made a dozen pint jars of granola for the Great American Bake Sale a couple of weeks ago (that’s the picture you see up at the top of the post). I don’t know if they all sold, but soon after I dropped them off, I heard a woman say, “I just want to grab one of those jars and pour it straight into my mouth.” I do love those overheard endorsements! 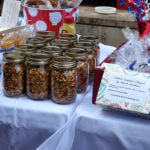 41 thoughts on "Homemade Granola for a Bake Sale"