Regular Food in Jars contributor Alexandra Jones is dropping in today with a recipe for homemade fire cider. This invigorating tonic is said to help boost your immune system and keep you healthy throughout the winter cold and flu season! -Marisa 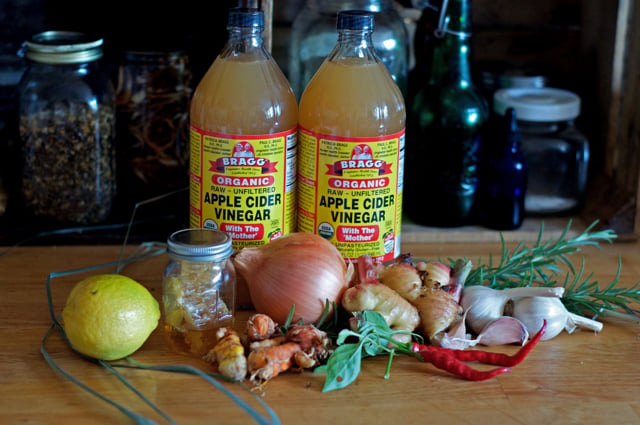 Where I am in Philadelphia, the leaves are changing, the air is getting cooler after a warm start to fall, and root crops are ready to harvest.

That means it’s time to start a batch of homemade fire cider.

This spicy, bracing infusion has been used for centuries as a way to preserve herbs and vegetables that also have medicinal value. Whipping up a big batch at the end of the growing season means that you’ve got a tasty tonic to sip on or use in recipes like sauces, marinades, and salad dressings.

I first tried making this recipe years ago, when I was a CSA manager tasked with finding with a handful of new and interesting recipes to include with each share of vegetables. One week, we included horseradish in the boxes, and I came upon the now familiar recipe.

I loved the ritual, the acidic flavor, and the kick — a powerful whoosh of horseradish, garlic, and onion straight to the nose. I’m not sure whether it was thanks to the homemade fire cider or something else, but I didn’t get sick that winter.

Fire cider has been used for centuries, but it wasn’t called that until the 1970s, when herbalist Rosemary Gladstar coined the name. Herbal practitioners and crunchy folks everywhere recommend taking doses throughout the day when you first feel a winter cold or flu coming on, or you can take a spoonful each morning to help stave off those pesky infections before they start.

And in recent years, it’s even become mainstream — so much so that one company tried to trademark the term, much to the chagrin of the herbal community. This is sort of like trademarking the idea of pizza, or jam — especially because one key characteristic of fire cider is that it doesn’t have a set recipe. 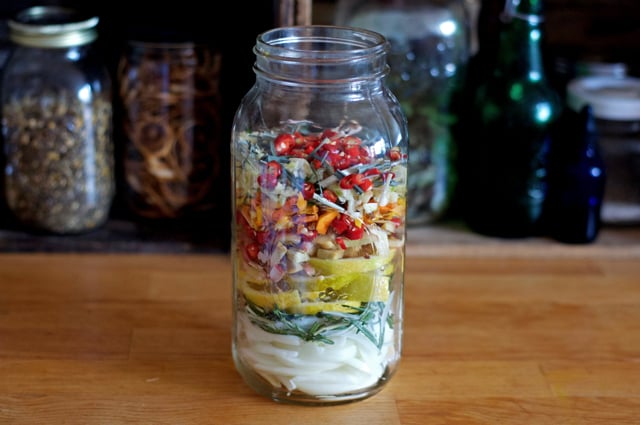 In fact, you’ll notice that horseradish — a staple of every fire cider recipe I’ve seen — isn’t in the photo of my batch. That’s because I couldn’t find a single root. I was too early for the farmers in my area, and none of the larger stores, even Whole Foods and Wegman’s, had it in stock when I looked.

Since I had fresh young ginger and turmeric on hand, I decided to go ahead and make my annual batch of fire cider anyway. If I can get ahold of some horseradish root in the next few weeks, I’ll simply chop it up and add to the infusion then, maybe giving the mix a little extra time to infuse. No big deal!

The tonic is typically a combination of hot peppers, alliums and roots like garlic, onion, horseradish, turmeric, and ginger, plus citrus, herbs, and spices, infused into apple cider vinegar. Chop up the veggies and herbs and mix with the vinegar, then stash the recipe in a dark place for at least a month. 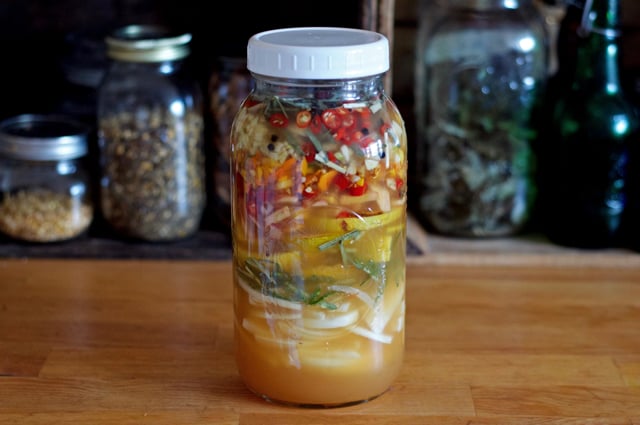 Strain, add honey, bottle, and take as needed — Rosemary Gladstar’s recommendation is a few tablespoons at the first symptoms of a cold, then another dose every few hours until you’re feeling better. Or take a tablespoon or so each day as a winter tonic.

That’s the basic template, but the variations are endless. Rosemary and black pepper are considered standard, but echinacea root, lemongrass, and thyme can also be added for extra immune-boosting power. Or throw some tulsi (a.k.a. holy basil, one of my favorite herbs for cooking and for medicine) into the mix to help you handle wintertime stress, too.

Take a look at the recipe below for this year’s version here in my kitchen. Have you made or tried fire cider before? Do you use any immune-boosting foods or herbal remedies to keep yourself feeling good through winter? Let us know in the comments! 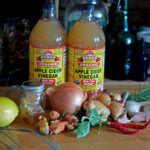 How to Make Fire Cider

34 thoughts on "How to Brew Bracing Homemade Fire Cider"