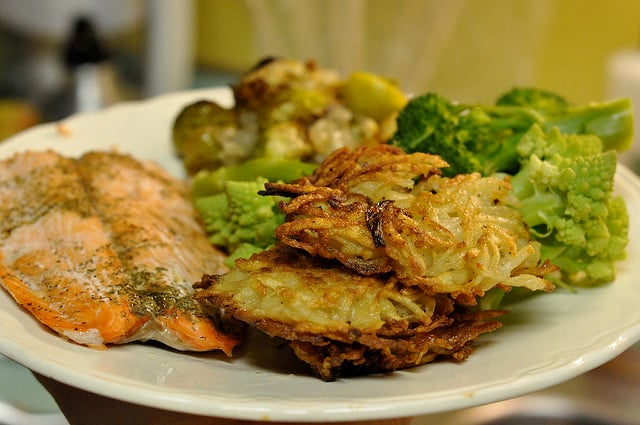 Hanukkah started last Friday night. For a secular, half-Jewish girl with Ashkenazi roots like me, that means it’s latke season. I didn’t grow up with latkes (my mother has something of an aversion to fried foods), but I adopted the practice of making them in college.

In fact, the second time I ever made these shredded potato pancakes was as a snack for a study break, when I was an RA in North Hall (a former hospital turned residence). I made around 150 in rapid succession. I learned a lot about the art of latke making that night (I also ended the evening with a number of grease burns on my forearms). 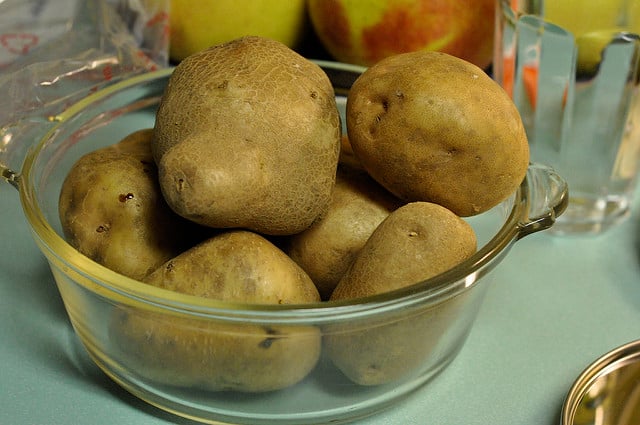 Over the years, I’ve developed a process of latke-making that utilizes both a frying and baking method. It means that I can use just 2-3 tablespoons of oil/fat and still have a latke that’s crispy on the outside and tender (and fully cooked) on the inside.

I shamelessly use my food processor for the shredding of the potatoes. I’ve tried hand-grating them as well and I’ve found little discernible difference between the two. In this instance, I happily choose technology over elbow grease (it is about ten times faster). My Aunt Flora, who’s vintage Cuisinart I now possess, would be so proud to see it used in this fashion.

The only problem I come across when using a food processor is there’s always a thin bit of potato and onion that doesn’t get grated. I pluck those bits out and give them a quick chop, so that they mimic the size and shape of the food processor veg. 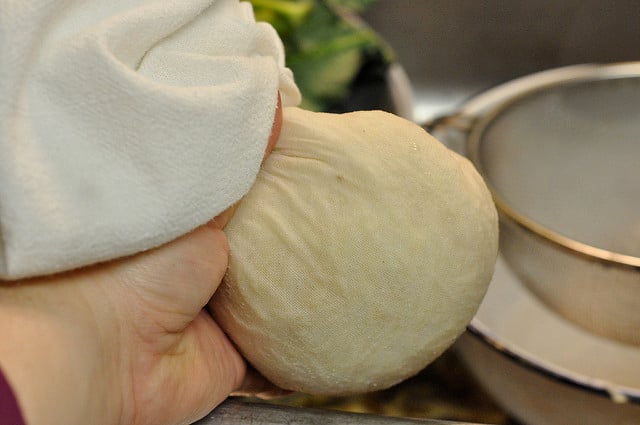 One of the secrets to making a good latke is making sure that you squeeze as much moisture out as possible. Some people suggest putting the grated potatoes in a colander and weighing them down. I find that wrapping them in a kitchen towel (the floursack variety works best here) or some cheesecloth and then twisting to remove the liquid, works the best.

Hanukkah is a celebration of oil. The reason we celebrate for eight nights is that lamp oil that was only supposed to last for one night, miraculously stretched to cover eight nights (the time needed for more oil to be produced). That’s why we eat fried foods at this time of year, to honor the gift of that oil.

Because I was trying to keep these latkes local (they did contains non-local salt, pepper and flour) I made a decidedly un-Kosher choice. I cooked them in local lard. It was the best local cooking medium I had (I considered clarifying some butter, but could not find the time) and honestly, they were some of the most crisp and celebratory latkes I’ve ever made. If you aren’t trying to keep your latkes local (or you live in a different area of the country, with wider local fat choices), peanut, olive or some other vegetable oil would all be more traditional choices. 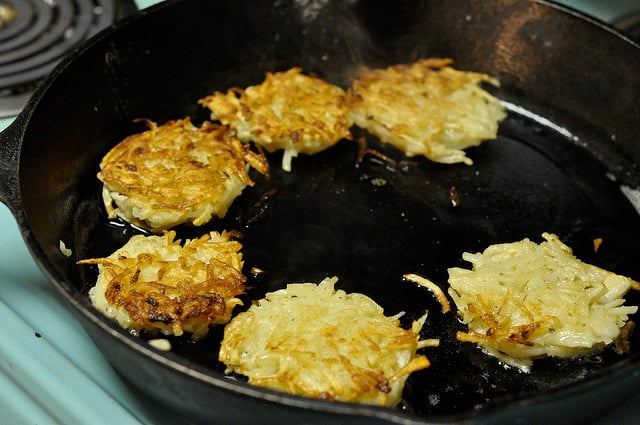 Last night’s batch of latkes used three small to medium Yukon gold potatoes, a quarter of a very large yellow onion, 1 egg (those first three ingredients were all-local), 4 tablespoons of all-purpose flour and bit of salt and pepper. Grate the potatoes, wring the liquid out, combine them with the grated onion, egg, flour, salt and pepper. Mix to combine. I’ve found that a fork is the best stirring tool for this particular job. 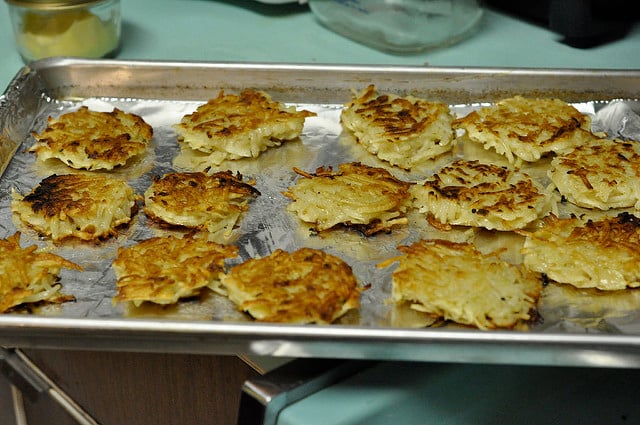 Add 2-3 tablespoons of fat to a frying pan (I like using a cast iron skillet for this job) and line a cookie sheet with foil (it’s important that you use foil here, parchment or a silpat will make for soggy latkes). When the fat is hot, grab a small palmful of latke batter, give it a quick squeeze (too much liquid is the enemy of the latke), form it into a patty and add it to the pan. You can pat it down with a spatula if you’d like, but do not move a latke in the first couple minutes of cooking. Early movement can destroy the structural integrity of the latke and you’ll end up with hash browns instead of pancakes. Still delicious, but not the plan.

Give the latkes 4-5 minutes on the first side and an additional 2-3 minutes on the second. When they’re nice and brown on both sides, move them to the foil-lined cookie sheet. I made a relatively small batch of latkes (just the 15 you see above) so they all fit on a single sheet. When the cookie sheet is full, put it in a 350 degree oven and let them baking for an additional 15-20 minutes (baking on the foil allows for further browning. It’s best to put the lighter side facing down so that you don’t get over crisping).

Once they come out of the oven, spread them out on newspaper, paper towels or brown paper shopping bag, to absorb the excess grease. Eat with sour cream and applesauce (preferably homemade). We ate ours as part of a dinner that included steamed broccoli (local), roasted brussels sprouts (local) and roasted salmon (sustainably fished and purchased through Otolith Community Supported Seafood).