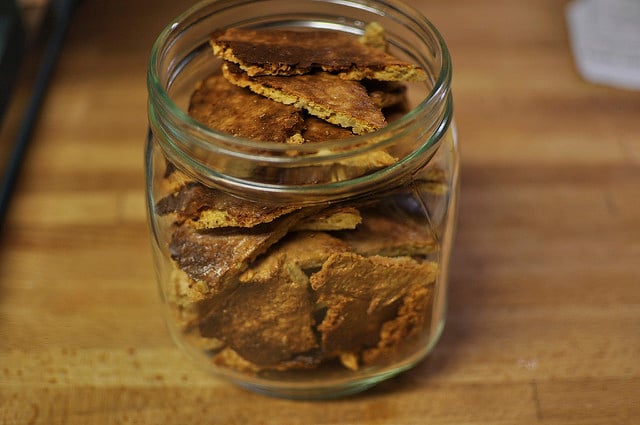 January is a hard month for a girl who writes about putting food in jars. While there’s still plenty of inspiration out there if you know where to look (citrus! pressure canned beans! root veg pickles!), this time of year does not lend itself as naturally to the act of preserving as those lush summer and fall months do.

Right now, the bulk of my cooking falls under the heading “General Sustenance.” This includes things like pots of turkey chili, black bean soup, green smoothies and hard boiled eggs. What’s more, since this new year arrived, I’ve felt a pressing need to keep things simple, like I’m storing up quiet time for the days when things get hectic again.

There is one little extra that I’ve been sneaking in amidst the pots of soups and stews. These grain-free crackers. Made of just sunflower seeds, shredded cheddar cheese, a pinch of salt and a bit of water, they are a very nice snack to have around when we’re feeling nibbly. Because they’re just cheese and seeds, they’re surprisingly filling and satisfying. I got the recipe from a copy of this book

that I picked up back in November for a dollar. Discovering this recipe made it a very worthwhile purchase!

Here’s how you do it. Preheat the oven to 325 degrees F. Pour 1 1/2 cups of raw sunflower seeds and 1/2 teaspoon sea salt into the bowl of a food processor. Pulse until the seeds have broken down into a rough meal. Add 1 1/2 cups grated cheddar cheese (I like to use extra-sharp) and pulse three or four times, just to combine. Then, while the motor runs, dribble in 1/4 to 1/2 cup water (just enough to form a dough).

Line a rimmed cookie sheet with parchment paper. Scrape the cracker dough onto the middle of the parchment. Using damp fingers (re-wet often), spread the dough out into a thin layer. You can lay a second sheet of parchment on top of the dough and use it to help you press the dough out. I’ll warn you right now, getting the dough spread into a fairly even layer is something of a pain. But it’s worth it.

Once the dough is spread, bake for 25-30 minutes, until the crackers are crisp and just barely browned. When they are done, remove the pan from the oven and score the dough immediately into squares or diamonds (it firms up quickly, so do this while it’s hot). When it’s cool enough to handle, break the crackers into manageable pieces. Store in an airtight jar. They’ll keep in the pantry for 7-10 days.

This is a nice recipe to keep in the back of your brain for those times when you want to make a snack that works folks who are gluten or grain free. It’s also nice for the low-carb eaters (that’s what led us to this in the first place). I haven’t tried it yet with other seeds or cheeses, but I do plan on it going forward.