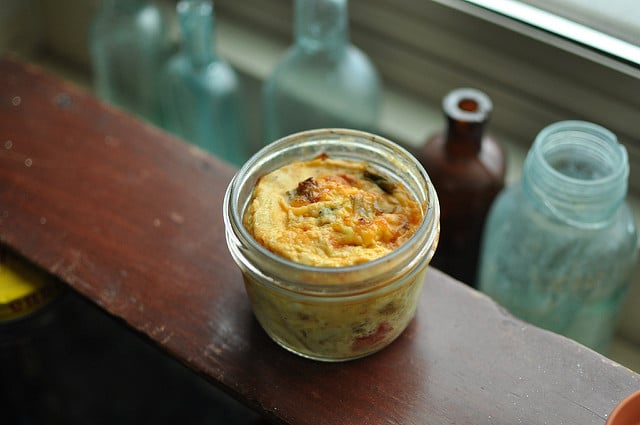 Two or three times a year, Scott and I come to the slow realization that our eating habits need a bit of a reset. I’m sure many of you know how this is. You go from making oatmeal for breakfast each morning to picking up a bagel and cream cheese around the corner from work. The meals that include heaping portions of green vegetables become fewer. And ice cream goes from a once-in-a-while treat to a grocery list staple. 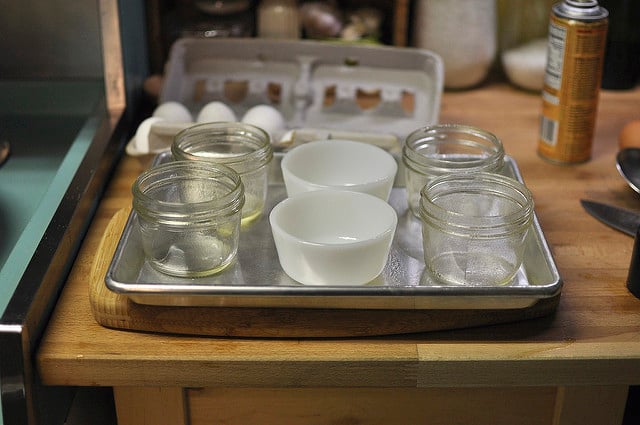 One of the best ways I’ve found for me to restore some reason to my eating habits is to spend a week or two actively increasing my greens and proteins and avoiding sweets, treats and anything made with flour. For those of you who like to put labels on such things, I guess you could call it a modified low carb diet. 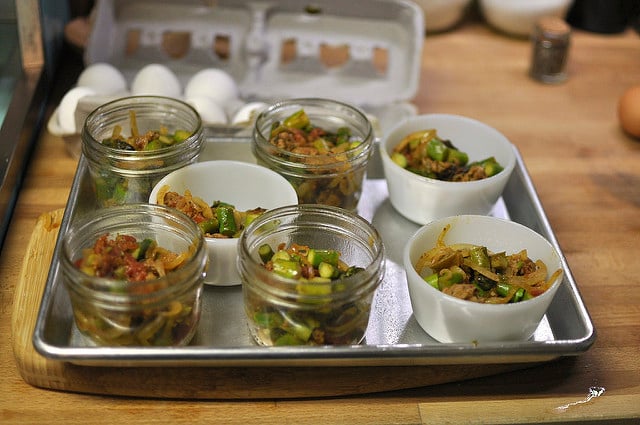 As we all know, eating better takes a little bit of planning, particularly when you’ve fallen into a habit of the morning bagel from the neighborhood deli. For me to get out of that rut, I have to make something tasty that I can easily take to work with me and will keep me satiated for a few hours. And that is where these cute little egg cups come in. 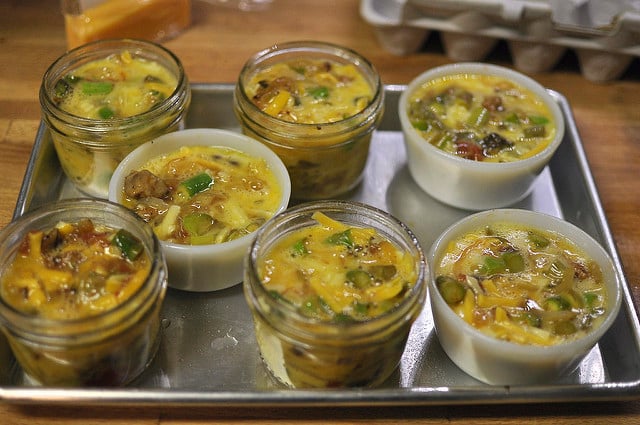 I’ve been making these in various forms for years now (as this two year old Slashfood post attests). I used to make them in a six-cup muffin tin, but recent realized that I should apply the bake-in-jars trend to this savory breakfast item. It means I don’t have to transfer them to another container after baking and instead can just screw on a lid once they’ve cooled down. And you all know I how much I love to eat my breakfast from a jar. 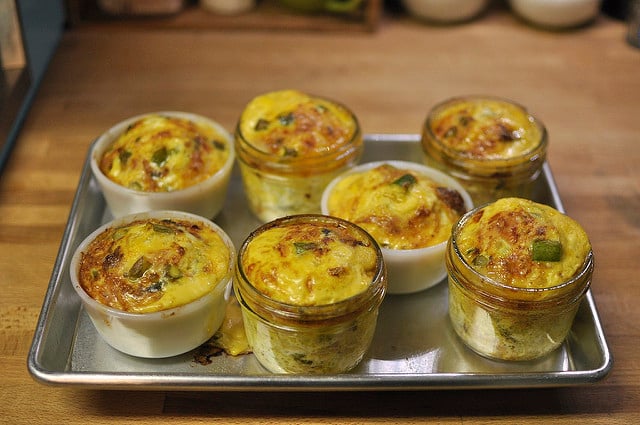 Unfortunately, several of my wide mouth half pint jars were recently pressed into canning duty, so I didn’t have quite enough to go around and had to employ some vintage Fire King custard cups to serve as well (I have an embarrassing number of these as I can’t resist them when I find them for $.25 at thrift stores). Still, you get the idea.

A word to the wise here. If you decide to follow my example and bake eggs in jars or glass, please make sure to give your vessels a good greasing. I was in a hurry when I made these (it was past 11 pm on a Sunday night) and took the cheater’s way in the form of the Trader Joe’s version of Pam. However, when I have a bit more time to play with, I grease the cups with butter.

And a final note. The recipe below calls for onion and asparagus. That’s because that what’s in season right now. During the summer, I use spinach or shredded zucchini. Kale or chard is good. I’ve even used leftover brussels sprouts in these. It’s all good and it all works. Use your imagination and pick out a couple of vegetables that taste good to you.

On reheating: When it comes time to eat these, I do one of two things. I either pop them into the microwave for a minute or I eat them after they’ve sat at room temperature for 15-20 minutes, until they’ve lost their refrigerator chill. You can reheat them right in the jars. If you want to reheat them in the oven or toaster oven, I’d recommend starting them in a cold oven so as not to shock the glass. 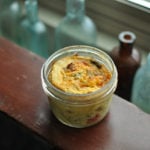 IMPORTANT: This is not a canning recipe. I use jars simply as a convenient baking/transportation vessel. They must be refrigerated once cool. Please do not think that if you put the lids on when the jars are hot that the resulting seal will mean they are shelf stable. Seriously. Final note: If you want to simplify things, you can actually bake egg items like this right in the pan where you sauteed the vegetables (provided that it is oven safe). I use a stainless steel or cast iron skillet and make crustless quiche/frittata as easy brunch/potluck dishes quite frequently.

90 thoughts on "Breakfast Baked Eggs in Half Pint Jars"