Book: Fruits of the Earth 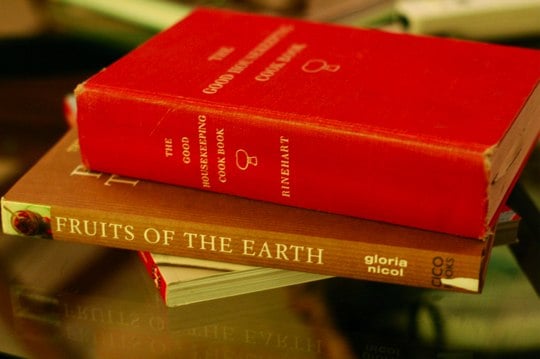 Ever since the idea of starting this blog entered my mind (many months before I actually committed pixel to template), I’ve been acquiring books about canning, pickling and preserving at a steady clip. Since my collection of cookbooks is already stored in every room of the apartment (this in large part thanks to the tide of preview copies I got for Slashfood’s Cookbook of the Day feature), I need to put the kibosh on this habit quickly (it’s also getting painfully expensive).

I haven’t been buying these books for general canning information, as I’ve found that any comprehensive cookbook written in the last 75 years has a more-than-ample section on canning (and I’ve got plenty of those from every era as well). I’m particularly fond of the no-nonsense language found in the 1942 edition of the The Good Housekeeping Cook Book, as the instructions don’t coddle or baby the reader, but instead assume that any cook worth their pickling spices has some working knowledge of homemade preserves.

No, I buy these glossy new cookbooks for their ideas and images, as well as for the sense of comradeship they lend (there just aren’t that many people out there interested in investing the bulk of their disposable income in canning jars, vinegar and pectin, especially in Center City Philadelphia), so I need all the community I can muster.

and was written by Gloria Nicol. Ms. Nicol lives in the UK, runs a company that trades in vintage homewares and writes a charming blog (unfortunately, it hasn’t been updated since the end of 2008).

It contains 100 recipes for jams, jellies, curds, marmalades and compotes. Since I’ve been on a marmalade kick of late, I found that section particularly inspiring, as she suggests a series of unconventional pairings that set my brain spinning (Apple and Black Currant Marmalade, for instance). I’m also intrigued by her recipe for Rhubarb and Lime Jam, particularly since I nearly squeeze lime instead of lemon into my last batch of rhubarb.

The pictures in this book are also breathtakingly lovely, full of gem-like jellies lovingly preserved in vintage jars and breakfast tables I long to join.

I haven’t made anything from this book yet, but I’ll be certain to share it here as soon as I do!

6 thoughts on "Book: Fruits of the Earth"