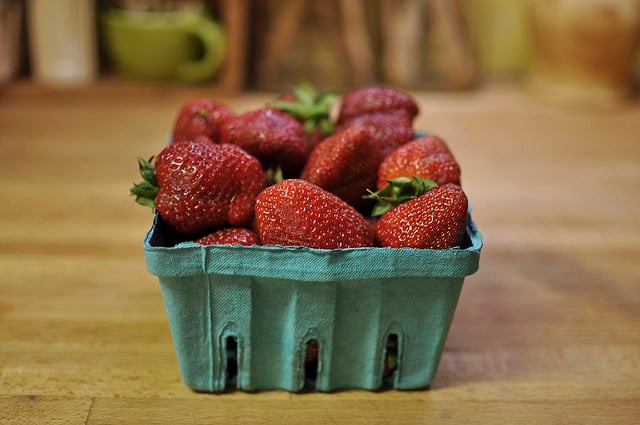 As many of you know, I live in a fairly compact apartment (remember these pictures of my kitchen?). My husband and I have something in the neighborhood of 1,050 square feet that we call our own. In the last three years, my canning habit has expanded and between empty jars, full jars and equipment, occupies a goodly amount of our available storage space. Over the last 12 months, it was necessary as I was creating and testing recipes for my cookbook project. 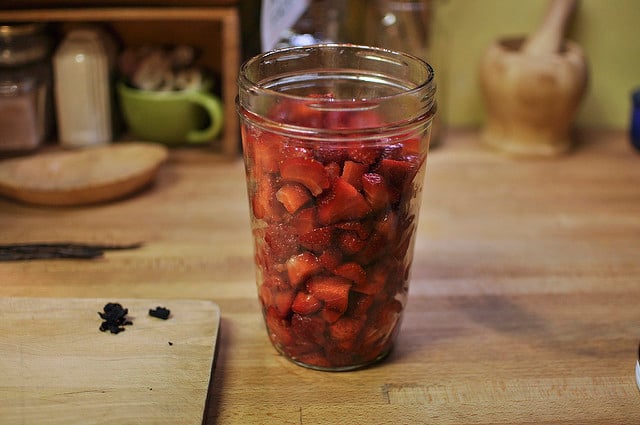 This summer, I’ve decided that it’s time to scale back just a bit. And though I love having enough to give away to friends and family, I just don’t need to make vast batches of strawberry jam that yield five or six pints. For my own use, just a few half pint jars will most certainly do. And so I’m going to try something new here on the blog. Every week or two, I’ll be posted a recipe under the header “Urban Preserving.” These recipes will be small batch preserves, all scaled to use just a pint, a quart or pound of produce. The yields will be petite, perfect for those of you who have small households or are short on space, time or cash. 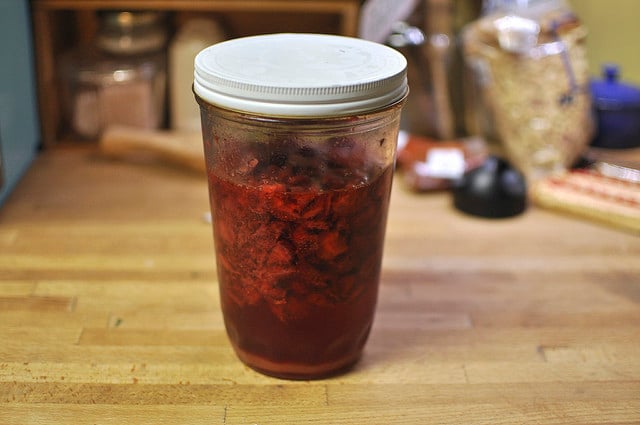 Before I left town for the Memorial Day holiday, I turned a quart of strawberries into three half pints of strawberry vanilla jam. I bought the berries on a Sunday, chopped them up when I returned home from the farmers’ market and tossed them with a cup of sugar and two split vanilla beans. Poured into a jar, the berries took a three-day rest in the refrigerator. I didn’t actually intend to let them macerate for that long, but as so often happens, life was busy and I just could not find the time to make jam until Wednesday night. 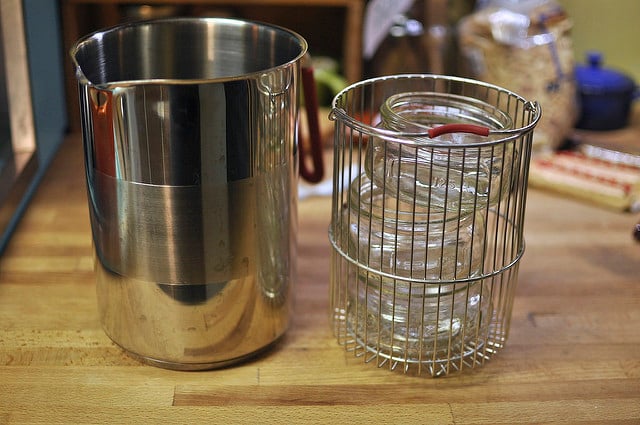 One of the true joys of small batch canning is that there’s no need to pull out a giant pot to serve as your water bath. A small one does the job just fine. I have two such pots that work well as a tiny canning pot. The first is the asparagus pot that I wrote about here. The second is the tall, spouted pot

Called a 4th burner pot, this is truly one of the best and most versatile pieces of cookware I own. I love it for making pickles, because you can heat the brine in it and then pour it directly into the jars. It makes the perfect gravy pot during the holidays. It can double as a tea kettle. And because it’s got that rack, it makes a terrific small batch canning pot. See how perfectly those three half-pint Elite jars fit into it? 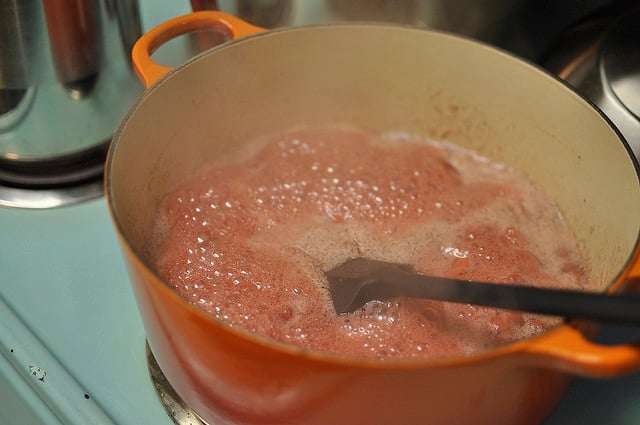 So, to catch up, I poured the jar of chopped, macerated strawberries into a 5 1/2 quart pot. I added an additional cup of sugar (bringing the total to 2 cups) and removed the vanilla bean pods. I turned up the heat and inserted a thermometer to track the temperature. I cooked the jam to 220 degrees and also eyeballed the back of the spoon, rivulet test. A lemon’s worth of juice and zest went it towards the end of cooking. 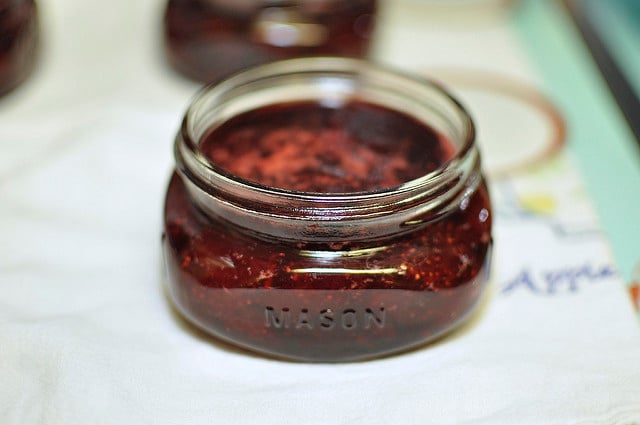 There’s another reason that making small batch jam is so satisfying. Because there’s less volume in the pot, it cooks down more quickly. That means it’s easier to get it to 220 degrees and often means that you can skip the pectin in recipes that might otherwise need it (I know that there are some of you who eschew the pectin entirely, but I’ve always found it necessary when making strawberry jam). Shorter cooking time also means a fresher tasting jam and such glowing color! 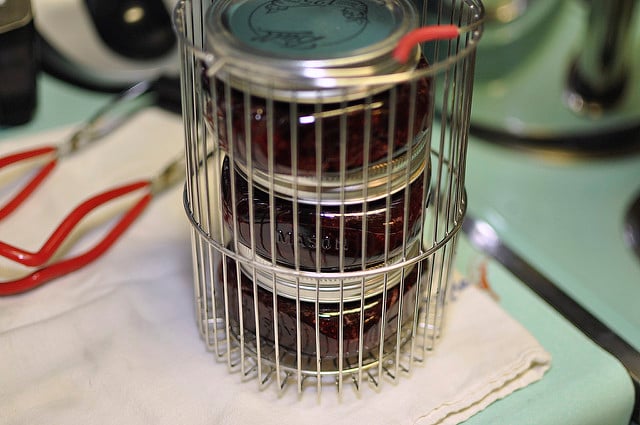 The jam was poured into the hot half pint jars (it fit exactly, but I scraped every droplet out of the pot to ensure evenly filled jars), lids were applied and the jars were stacked into the rack. Lowered into the pot, they spent 10 minutes simmering in the handy 4th burner pot. 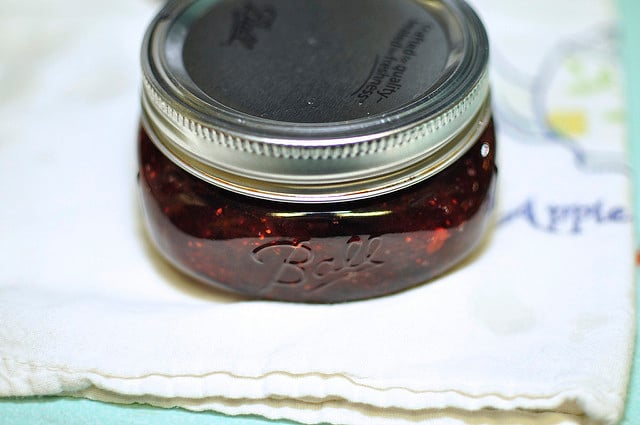 Within 45 minutes of when I turned on the heat under my jam pot, the jars were out of the canner and pinging on the counter top. I took one jar up to Northampton last weekend to share with our hosts. The other two jars are tucked away for next winter.

A non-narrative, traditionally organized recipe is after the jump. 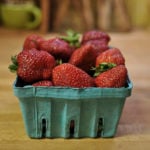