This May, our friend Shae Irving is shutting down her blog, Hitchhiking to Heaven. She has offered up some of her old posts so that they can continue to live and be useful after HtH closes its doors. This Meyer Lemon Marmalade with Pomegranate Seeds is one we thought you might appreciate. 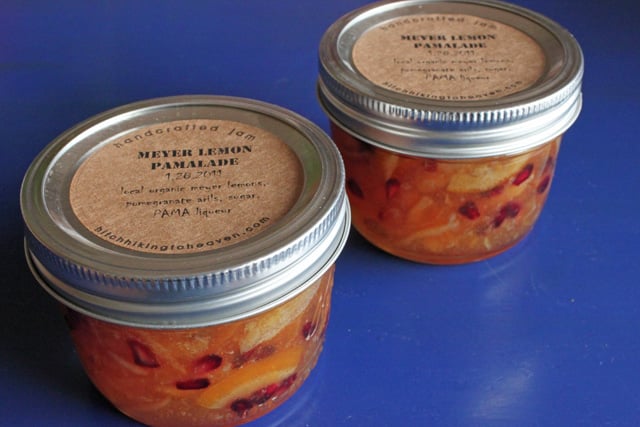 One of the most popular recipes posted on Hitchhiking to Heaven is a tasty, simple Pomegranate Champagne Jelly. In the comments to that post, a couple of folks asked whether it would be okay to include the pomegranate arils — that is, the seeds in their beautiful red, fleshy wrappings. I didn’t think it would lead to happy results.

That particular jelly needs to go into the jars piping hot and the arils would float to the top. If you waited for the jelly to cool enough that the arils wouldn’t float, the texture of the jelly would be wrecked. I concluded this from my experiences trying, mostly unsuccessfully, to float intriguing things in jelly — like slivered almonds or flowers. 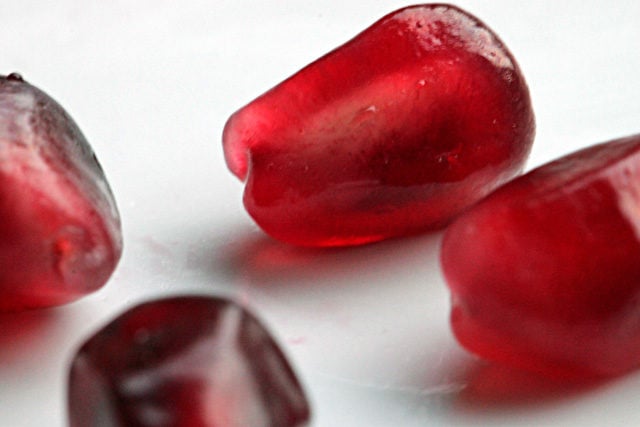 Still, those tiny red jewels kept rattling around in my head. When I spied some lovely arils at Whole Foods the other day, knowing I had a bag of freshly picked Meyer lemons in my car — well, you can see what happened. I decided to try the arils in a chunky Meyer Lemon Marmalade, and it worked out great. To add a splash of complexity, I included some booze from my stash of liquor minis for jamming: a pomegranate liqueur called PAMA. 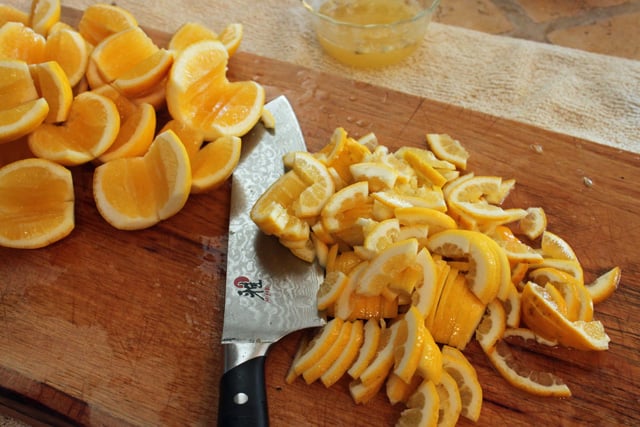 And that’s how the marm got its name.

If you like to eat pomegranate arils (they’re good for you — full of fiber and antioxidants) you might want to experiment with something like this. As marmalades go, this one isn’t very labor intensive. It’s a one-day process instead of the usual two or three. Meyer Lemon Marmalade can be prepared more quickly than most marmalades made with other types of citrus, because the lemons are so soft. 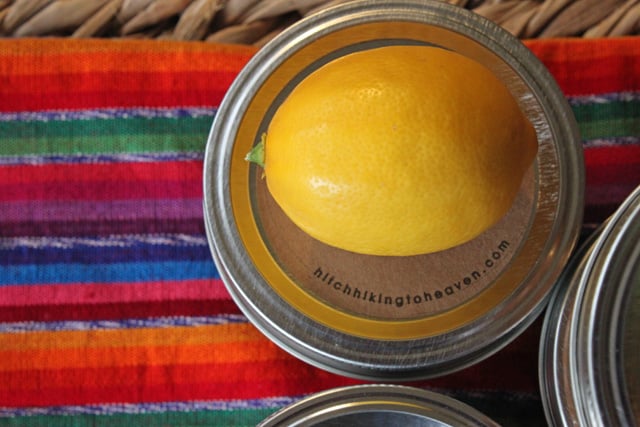 1. Slice your lemons according to the directions in How to Slice Citrus Fruit for Marmalade. Strain the leftover lemon juice (the post about slicing fruit explains this) and set it aside.

2. Put the lemons, strained lemon juice, and water into a large, nonreactive saucepot. Bring the water to a boil and then immediately reduce to a simmer. Simmer the lemons for 5 minutes only.

3. Transfer the lemons and water to a large glass or ceramic bowl and set them aside to soak, covered, for 4-6 hours. (It’s fine to leave them at room temperature.) Don’t leave them to soak any longer than 6 hours. You don’t want them to fall apart. I usually prepare the lemons early in the day and then come back to cook them in the late afternoon or evening.

4. After the lemons have soaked, sterilize your jars and put 5 metal teaspoons on a plate in the freezer to test the marmalade for doneness later.

5. Place the lemons and their liquid in a large, nonreactive jam pan. Bring the liquid to a boil and then immediately reduce to a simmer. Simmer until the lemons are tender. If a slice of lemon easily comes apart when you press it against the side of the pot with a wooden spoon, the lemons are ready.

6. Add the sugar to the pot and stir well. Bring the mixture to a boil on high heat and leave it on high heat to cook. Stir very little during this initial cooking phase, so the mixture doesn’t cool too much.

7. Add the PAMA and pomegranate arils toward the end of the cooking process. I added them after the mixture had been cooking for about 30 minutes, expecting that my marmalade would set somewhere between 35-40 minutes. As it turned out, the addition of the cooler liquid and the arils extended the cooking time quite a bit. It took closer to 45 minutes for the marmalade to cook. Next time I do this, I will add the liqueur and arils later, at about 35 minutes.

8. Start to test the marmalade for doneness* when you notice that the mixture has thickened and the bubbles have become smaller, shinier, and more concentrated. You will also notice an increase in foaming when you stir the marmalade during this final stage.

9. When the marmalade is finished, remove it from the heat and skim the foam. Allow the mixture to cool for about ten minutes, giving it a gentle stir every couple of minutes or so to distribute the arils. Then ladle or pour the marmalade into the sterilized jars, leaving 1/4-inch head space. Wipe the jar rims with a clean, damp cloth if necessary, and secure the lids.

10. Process in a water-bath canner, using the correct time for your altitude: 5 minutes for 0-1,000 feet above sea level, plus 1 minute for every additional 1,000 feet.

*Testing the marmalade for doneness. Remove the mixture from the heat. Use one of the frozen spoons to scoop up a little bit of marmalade — not a whole spoonful, more like half. Return the spoon to the freezer and wait 3 minutes. Retrieve the spoon and hold it vertically. If the marmalade doesn’t run and has reached a semi-solid consistency, it’s done. Alternatively, give the mixture a push with your finger. If it wrinkles all the way through, it’s done. If the marmalade isn’t done, return it to the heat, cook it for 2-3 more minutes, and test again.

This piece was originally published on Hitchhiking to Heaven on January 29, 2011 and was written by Shae Irving.