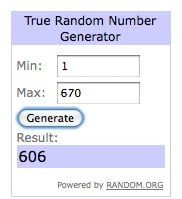 Goodness, you guys are crazy for Weck jars! I had feeling this would be a popular giveaway, but I had no idea that it would be a Food in Jars record breaker. An impressive 670 of you signed up for a chance to win a six-pack of jars from Kaufmann Mercantile. As is my way, I turned to random.org for help choosing a winner. After a moment of consideration, it spit out #606, which is the comment left by Atarah. Congratulations, you lucky canner!

So many thanks to all of you for playing!