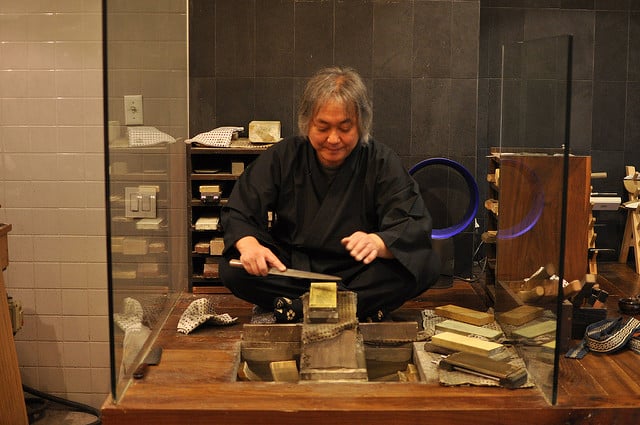 It’s been nearly a year since the massive earthquake and tsunami that devastated vast sections of Japan. So often with these kinds of disasters, there’s a very active initial upsurge of aid offered, but then after some time passes, the event begins to drift from our consciousness.

Korin, the knife and tableware store I recently visited in New York, is working to keep the Japanese situation in our hearts and raise funds for rebuilding while doing so. To that end, they’re donating all net profits that derive from their knife sharpening and repair services to Japan’s earthquake-tsunami disaster fund throughout the month of March.

You don’t have to live in New York or even be within a train ride to have your knives sharpened at Korin. You can simply download their form, wrap your knife well and send both the form and the knife to the shop. They’ll be in touch when they receive it and then will proceed to sharpen and return it to you.

Knives are sharpened by either Mr. Sugai or his apprentice. They can sharpen any non-serrated knives, engrave any Western style knife, repair blade chips and restore discolored knives. Knives are typically processed and back in the mail within seven days. Knife sharpening and repair rates can be found by clicking more.

The nice folks at Korin have also offered me the chance to give away three free knife sharpenings. Here’s how to enter:

Disclosure: As previously noted, Korin gave me two knives; one to keep and one for this giveaway. My opinions remain entirely my own and I received no additional compensation to publish this post.

73 thoughts on "Sharpening Knives for Tsunami and Earthquake Relief"