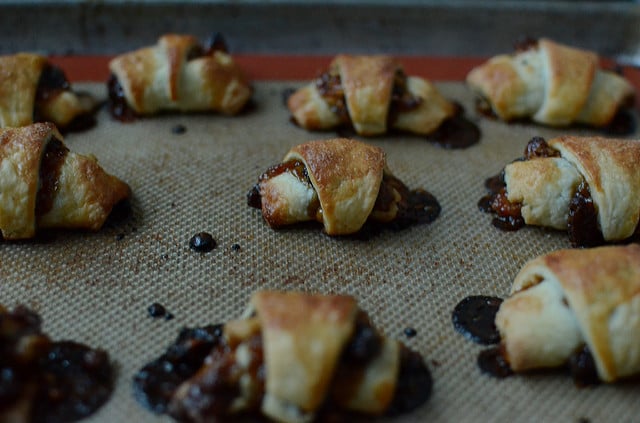 Hanukkah took me by surprise this year. It started last Saturday night, which felt impossibly early to me (I still wake up most days thinking it’s November, so I’m woefully out of sync). The days since have passed in a blurry haze of deadlines, gift wrapping, and holiday parties. Though I’ve struggled to wrap my hands around this holiday of miracles and illumination, I’ve somehow still managed to light my menorah (two nights out of six so far) make a couple of appropriately celebratory foods. They both just happen to involve preserves.

The first thing I made was a batch of rugelach. These cookies are eaten all year long, but are particularly traditional around Hanukkah. The dough is made with butter, cream cheese, flour and just a bit of sugar. After some time in the fridge to chill, you roll out the dough, spread it with fruit jam, and spread chopped walnuts and raisins over top. The round of dough is sliced into wedges, rolled, chilled (ideally, at least. I rarely have room in my fridge to chill a sheet pan) and baked. They are divine and when I make them, I feel connected to all the women in my family who rolled these same cookies long before I was born. 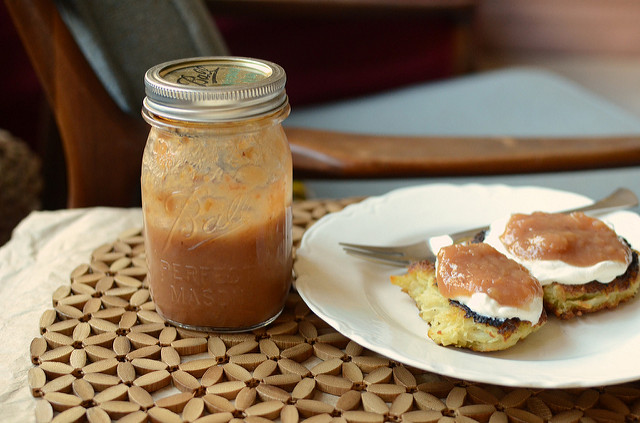 On Wednesday night, I made latkes. I don’t really ever follow a recipe for latkes (though I do employ this trick of soaking the shredded potatoes in a bowl of ice water to help extract the starch and prevent discoloration). Much like I assume my great-great-auntie Tunkel once did, I grate potatoes until it looks like I have enough. Add shredded onion, an egg or two to bind, flour to thicken, and salt and pepper for flavor. And then fry until crisp in a bit of oil. Topped with a layer of sour cream and applesauce (there’s the preserve!), they are such a treat.

How are you using your preserves this week?