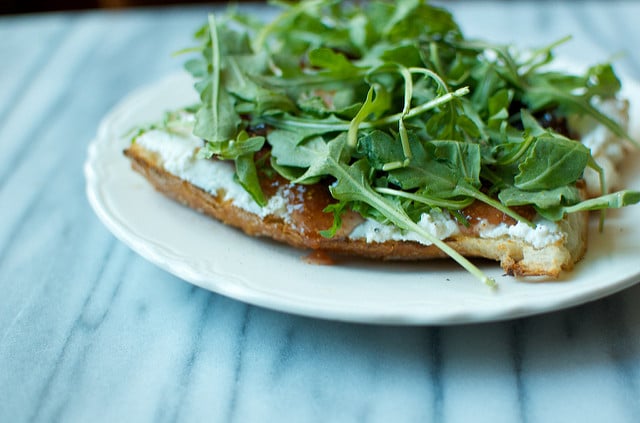 On Monday night, I took a cheese class at Metropolitan Bakery with Madame Fromage and Sue Miller of Birchrun Hills Farm (she is one of my very favorite Pennsylvania cheesemakers). It came just after a weekend in which I had taught and demo-ed enough to make my voice go hoarse, so it was doubly nice to sit back and let someone else do the teaching and explaining.

We began the tasting with an orienting sip of Birchrun’s raw milk, just hours from the cow and then, starting with fromage blanc, we sampled our way through six cheeses. There were slices of baguette and French berry roll from the Metropolitan ovens, and at the end, a little splash of madeira to drink with slices of Birchrun blue. It was one of the nicest evenings I’ve had in a while. 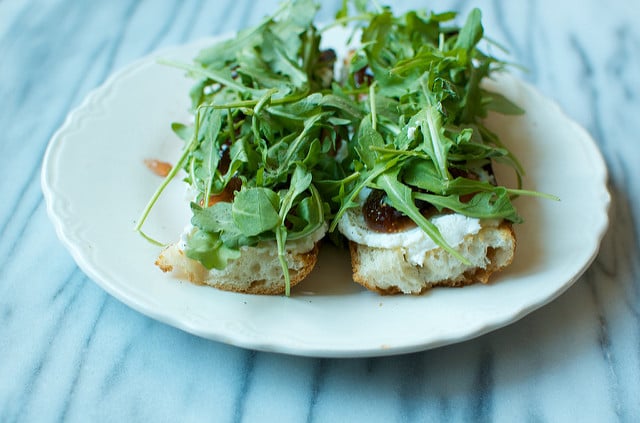 At the end of the class, we were packed off into a chilly night with warm cheeks and fresh baguettes. Scott is currently off carbs, so the work of eating this pointy loaf has been entirely mine (truly, it’s not a hardship). This morning, when I opened the paper bag, it was quite hard. Happily, I have a trick for refreshing bread that always works with Metropolitan’s loaves (they use a long fermentation period, which builds the interior structure and makes it more resilient).

I hacked off a chunk, sliced it down the middle and ran the pieces quickly under a dribbling kitchen faucet. I toasted the slices twice, once to help dry them out and again to give them some color. The end result is four-day-old toasted baguette that is flavorful, with just the right amount of crunch and chew.

Now, here’s where the Preserves in Action component comes in. I spread the toasts with fresh ricotta cheese (what I really longed for was Sue’s fromage blanc, but Claudio’s ricotta is a more than acceptable substitute), dolloped on fig jam, and piled up baby arugula. I added a few turns of a pepper grinder and breakfast was ready. This meal could easily serve as lunch, or if cut into smaller pieces, as a starter for a party.

Curious why I know so much about this bakery’s practices? Many moons ago, Scott and I used to make an online cooking show called Fork You and in one episode, we visited Metropolitan’s baking facility and made bread with James Barrett, one of the founders. The old blog appears to be corrupted, but the video is still available on Viddler’s blog if you’re interested in finding out more about them (and seeing the glasses I was wearing five years ago).

5 thoughts on "Preserves in Action: Baguette with Ricotta, Fig Jam, and Baby Arugula"