Note to Self – Remember the Okra 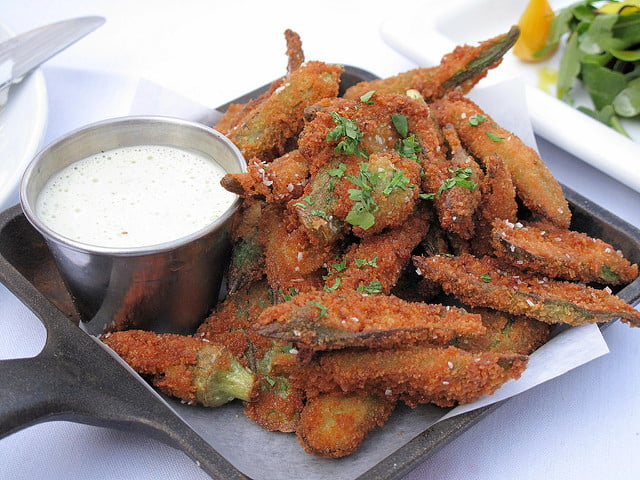 I’ve been in Austin, TX for the SXSW Interactive conference over the last few days, so I’ve been running hither and yon, attending sessions about things like Misogyny on the Internet and Is Online Privacy Broken. It’s been a fascinating whirlwind, although I’m looking forward to getting back to home and routine tomorrow night.

Last week, I made a batch of Orange-Ginger Marmalade, but I’m finding that I can’t quite muster the mental organization to write about it, especially when my meals have been consisting of things like barbecue ribs at Iron Works and an amazing Tex-Mex dip that consists of queso (melted Velveeta and Rotel tomatoes*) poured over a mound of guacamole.

However, I did want to mention the fried okra I ate last night, at a lovely restaurant on 6th Street called Parkside. Everything I tasted there was absolutely delicious, but the fried okra continues to linger on my palate-brain and it has me convinced that I need to incorporate okra into the canned vegetable rotation in the coming season. I’ve always been one of those who shied away from okra, fearful of it’s mucus-like reputation, but after Parkside’s okra, I am converted. I know that Rick’s Picks makes a pickled okra (and it’s a product with a loyal following), but now I’m going to be on the prowl for a recipe to do it at home. Anyone have any suggestions?

*It is one of my goals to can a batch of homemade tomatoes in the Rotel style (chopped with roasted jalepenos) over the summer/fall canning season. Hold me to it!

9 thoughts on "Note to Self – Remember the Okra"