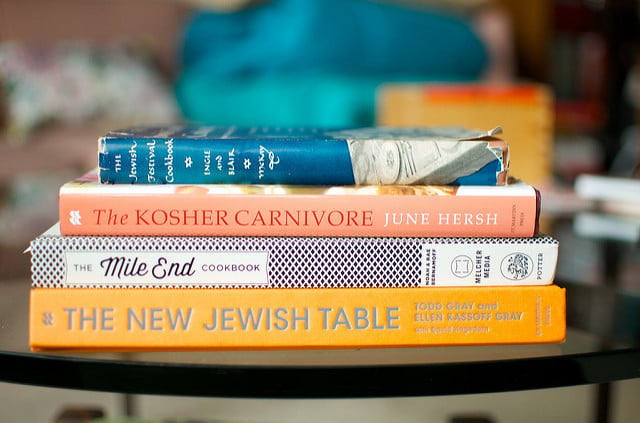 One of the joys of living in a city with a huge extended family is that our holidays are chaotic and deliciously boisterous. These days, my cousins regularly host just the kind of Thanksgiving, Hanukkah and Passover gatherings I longed for when I was young and lived far away from any grandparents, aunts, uncles and cousins.

However, there is just one (very small) downside to these large, collaborative holiday meals for me, and that is the fact that I never get to be in charge of the menu. I certainly always make contributions to the buffet and over the years have graduated from bringing secondary side dishes to the main course. But, as a food writer/blogger who reads cookbooks for recreation, I often find myself longing to craft the entirety of a celebratory menu. 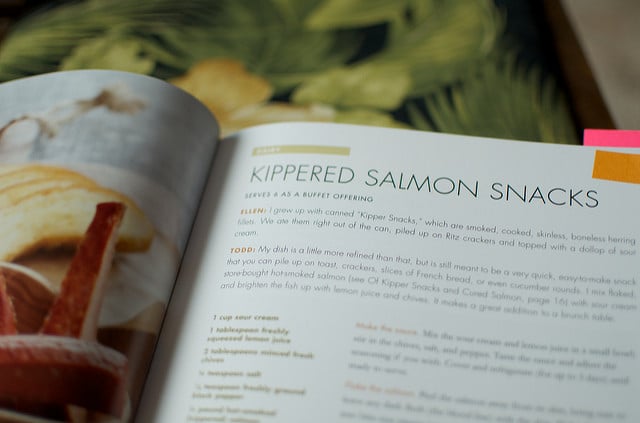 I could certainly have secondary holiday gatherings and next year, when I’m not working on a book and life isn’t quite so frenzied, I hope to do just that. This year though, with Passover (and my cookbook deadline!) fast approaching, I thought that I’d indulge in a little fantasy menu planning instead of tackling the real thing. This way, I get all of the pleasure of flipping through cookbooks and imagining a meal, without any of the work of shopping, cooking or cleaning.

For my imaginary Seder, I pulled out four cookbooks. The Jewish Festival Cookbook

(first published in 1954, but available in more modern editions), The Kosher Carnivore

(a particularly good resource if you have kosher friends), The Mile End Cookbook

(classic Jewish food with pages and pages of pickles), and The New Jewish Table

(beautiful food). After a couple hours of reading, marking and stomach rumblings, here’s what I’d serve if I was hosting my family for Passover this year. 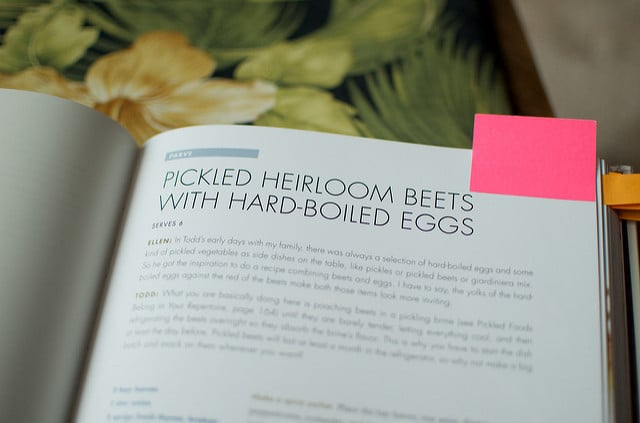 For when people first arrived, I’d put out the Kippered Salmon Snacks and the Pickled Heirloom Beets with Hard-Boiled Eggs, both recipes from The New Jewish Table. Kippered fish has been salted and hot smoked, so that it’s fairly dry and meaty (more like the smoked salmon you get in the Pacific Northwest than the moist Nova salmon you put on bagels).

The pickled eggs with red beets are traditional in a number of cultures and are a nice symbol of the fresh, newness of spring. I did a version for Serious Eats last year that was quite tasty and very easy (you cheat with already-pickled beets). Chances are good that I’d also pull out a few jars of other pickles and chutneys that would complement these two official recipes. 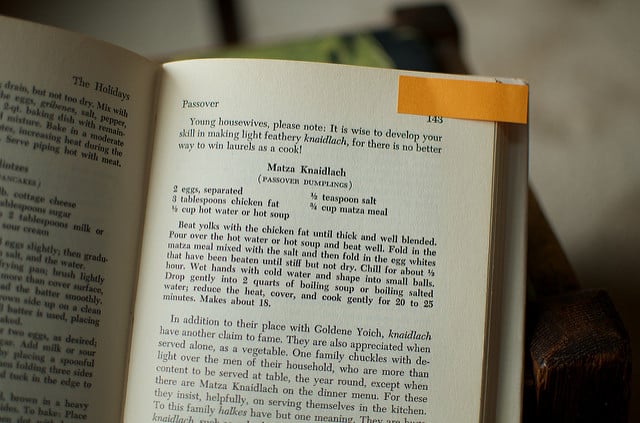 After we made it through the Hagaddah, we’d move on to Matzo Ball Soup. I’ve long meant to make matzo balls according to the directions in the Festival book and this could be my chance (I love the line in the headnote encouraging young housewives to develop their knaidlach skills to win laurels as a cook). I’d use homemade chicken broth that was cooked ahead and pressure canned to save space in the fridge. 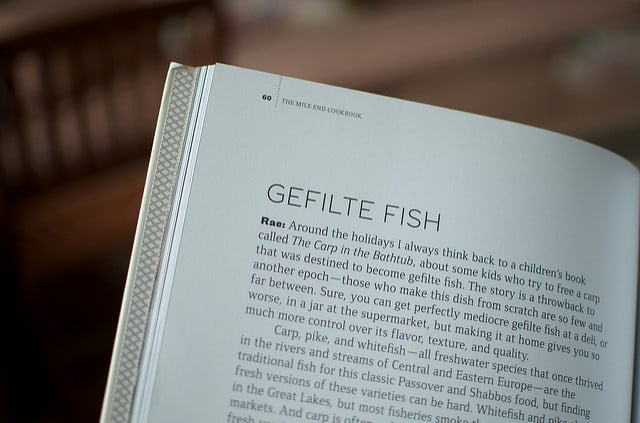 I think gefitle fish gets a bad wrap. Most of the time, the stuff served at Passover comes from a can and tastes a little stodgy, fishy and funky. But homemade gefilte fish? It’s actually incredibly delicious and deserves a spot on the table. I’m hankering to try this recipe from The Mile End Cookbook. 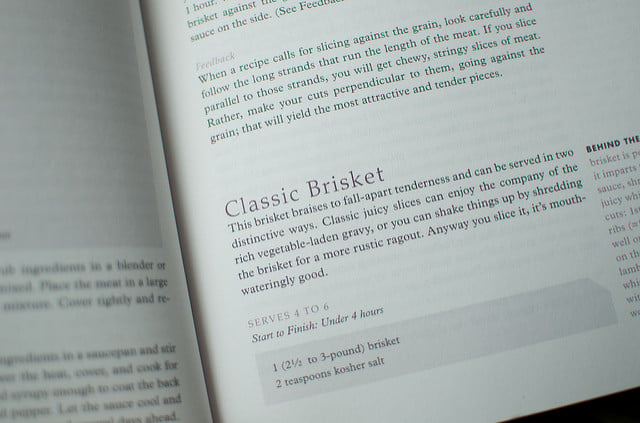 For the meat eaters, I’d make brisket. And actually, this is the one thing I actually am making this year. I will take some cues from this recipe (she uses lots of aromatics for flavor) from The Kosher Carnivore and combine them with my own tricks (lots and lots of sauteed onions).

I’m also a believer in making brisket the day before you plan on serving it, so that it can rest in the fridge over night and develop more flavor. This also gives you an opportunity to skim the fat from the sauce and make a luscious puree from the juices and vegetables in which to gently reheat the brisket. 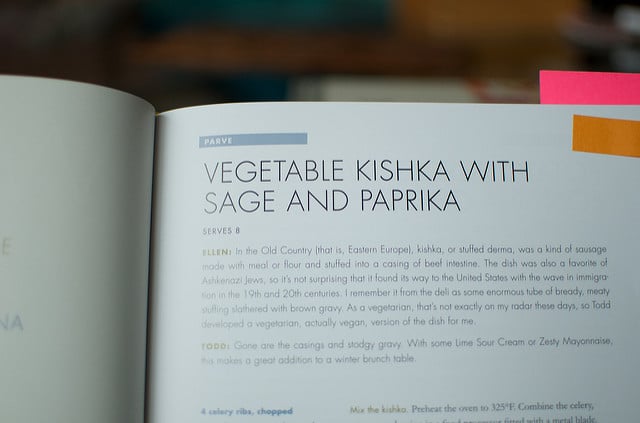 For vegetarians, the Vegetable Kishka with Sage and Paprika from The New Jewish Table seem like a good fit. And ever since watching a recent episode of Diners, Drive-Ins and Dives in which they made kishka, I’ve been a little bit obsessed with it.

Along with those main course options, I’d also make a big salad with baby arugula, sheep’s milk feta, and pomegranate seeds. Because any big meal needs a mountain of greens to balance things out. 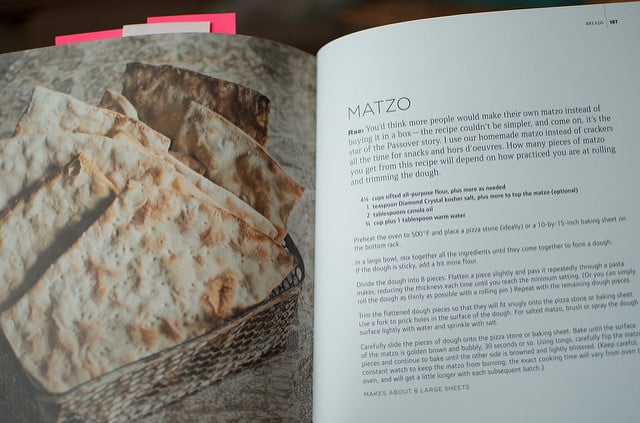 If there was time, I’d also make a batch of homemade matzo (I may actually make a batch of this in the next few days, with half whole wheat flour and some finely chopped rosemary. Because it sounds awfully good). For dessert, my beloved flourless chocolate cake.

For those of you who are hosting holiday meals in the next couple weeks (Easter is coming up soon, as well), what are you planning on serving? Are there any cookbooks that you’re using particularly heavily?

Disclosure: I received review copies of The New Jewish Table, The Kosher Carnivore, and The Mile End Cookbook for consideration. I bought my copy of The Jewish Festival Cookbook years ago. All opinions are my own.

17 thoughts on "My Imaginary Seder Menu"