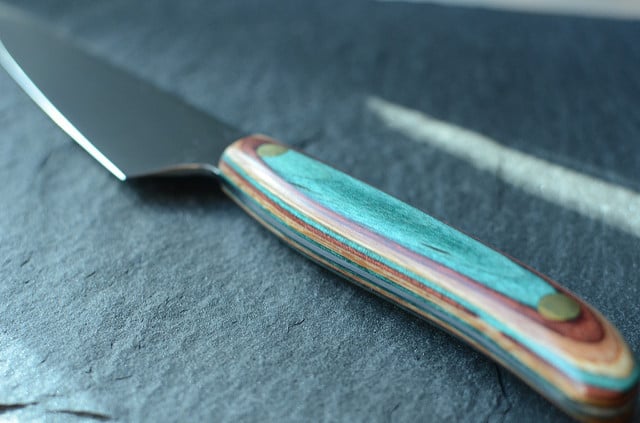 A couple of years ago, I got an email from the folks at New West KnifeWorks, asking if I’d be interested in trying out a couple of their knives. Because I’m always on the look-out for the perfect kitchen knife, I said yes. They sent me a chef’s knife and a paring knife from their original Fusionwood line.

Over time, I found that while I really liked the paring knife, the chef’s knife felt a little clunky in my hand. That had, in large part, to do with the blade. It was really heavy and thick. I found that while it was great for whacking through dense things, but it was just too darn hefty for daily chopping. 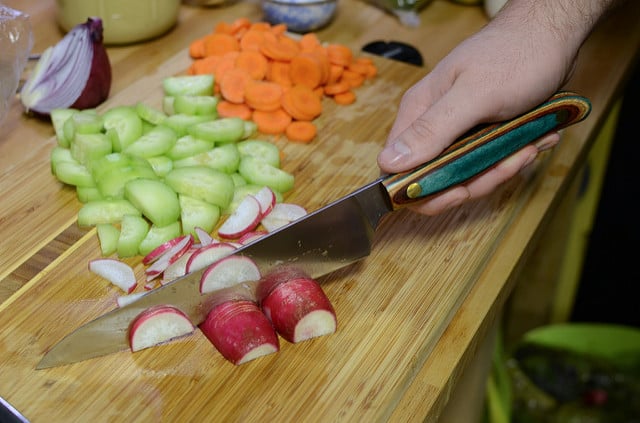 Recently, I heard from New West KnifeWorks again. They were writing to say that they’ve redesigned their knives to use a “super steel*” that allows the blades to be both thinner and stronger than the previous version and would I be interested in trying one out. I said yes again (I can’t resist kitchenware).

The Fusionwood 2.0 eight-inch chef’s knife arrived a couple weeks back now and it has rapidly become one of my favorite things in my kitchen. That gorgeous grip feels quite natural in my hand, the blade is much lighter and appears to be holding its edge quite well. I’ve been using it everyday and I’m not noticing a diminishment in performance as of yet.

I also really like the shape of the blade. It’s a little narrower than traditional for a chef’s knife and I’m find that to be a positive feature. When chopping dense vegetables like carrots and potatoes, the pieces fall off the blade easily instead of clinging to its surface. A very useful thing as we head into the season of root vegetables and holiday cooking. 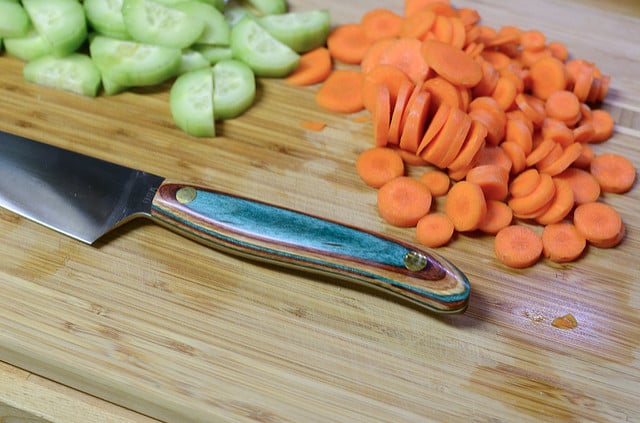 I also like the fact that New West KnifeWorks strives to be a conscientious company. Their knives are made in Wyoming and the factory is run on power generated by their own hydropower plant. What’s more, all the knives have a lifetime guarantee for non-commercial use. If you’re unhappy with it, they will replace it. And, if you break a knife through mistreatment (though I can’t imagine any of you responsible Food in Jars readers doing such a thing), they will replace it at half price. In these days disposal everything, it’s truly lovely to see a company making good stuff and standing by.

New West KnifeWorks has given me a second Fusionwood 2.0 eight-inch chef’s knife to giveaway to one of my readers. Here’s what to do to enter:

But wait, there’s more! New West is also giving away a four-piece set of their knives on Facebook. Click here to visit the entry page and throw your hat into the ring for that contest as well!

Disclosure: New West KnifeWorks provided me one of their Fusionwood 2.0 eight-inch chef’s knives for review and photography purposes at no cost to me. They’ve also provided the giveaway unit at no cost to me. However, they did not pay me to run this post or say nice things about them. I did that simply because I liked the product. My opinions are independently mine.