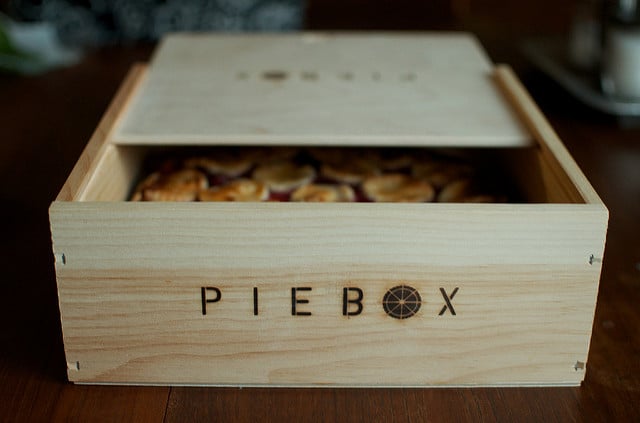 Most people think that pie is a winter dessert. After all, it’s traditional to serve it at Thanksgiving and Christmas celebrations. Thing is, the summer months are made for pie. All that seasonal fruit just begs to be tossed with a little sugar and flour and tucked between two layers of pastry. To truly feel like I’ve gotten the most out of these warm months, I have to make at least three or four pies. 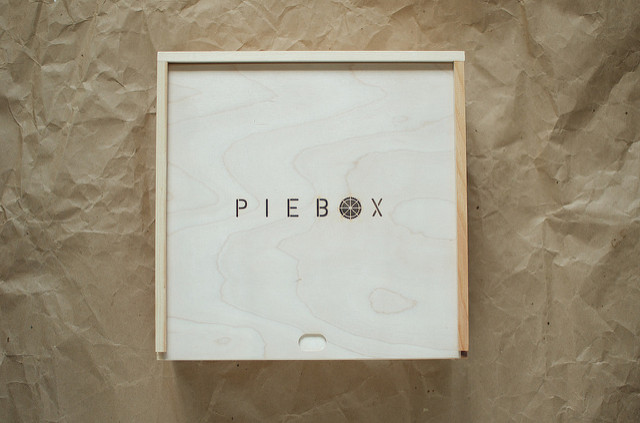 The thing is, pie is a dessert that craves community. It is at its best a few hours out of the oven and doesn’t keep particularly well (I figure no more than 48 hours before the crust has gone unpleasantly soft). So a pie maker is faced with an age-old issue. Eat the bulk of a pie on her own or find people to share the pie with. Because I have a healthy respect for the integrity of my arteries, I always opt to share. 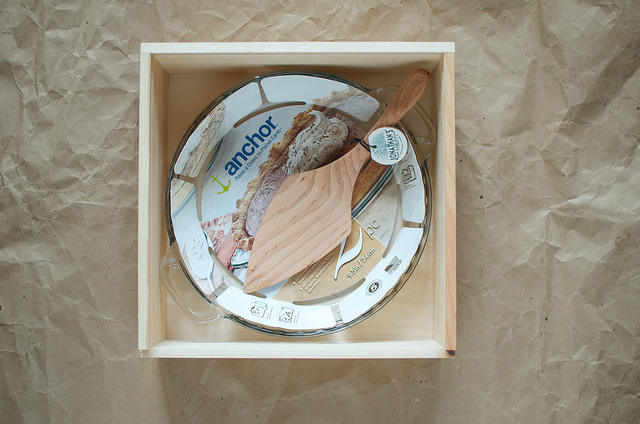 However, transporting a pie without damaging its delicate, flaky structure can be a tough trick. Sure, you can tuck it into a cake carrier (if you have one). But because they’re scaled for larger desserts, it might slide around. You can balance it in a cardboard box or risk carrying it uncovered. Or, you can tuck it into a Pie Box. 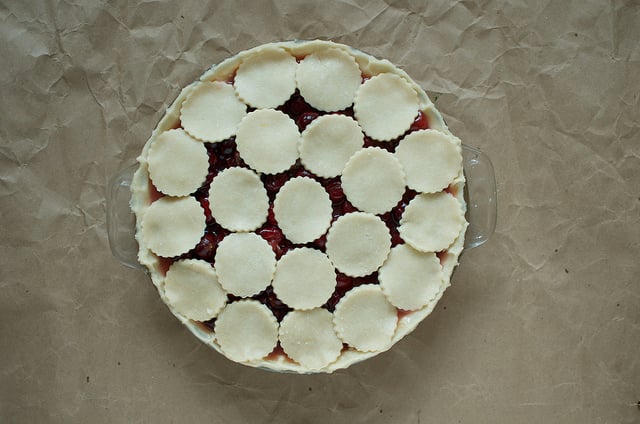 Designed to hold a 9 inch pie, the Pie Box is made of untreated raw pine by hand in Chicago. It is sturdy, solid, and when paired with a glass pie pan and a wooden server like Mighty Nest has done, makes for a perfect way to share and give a pie. 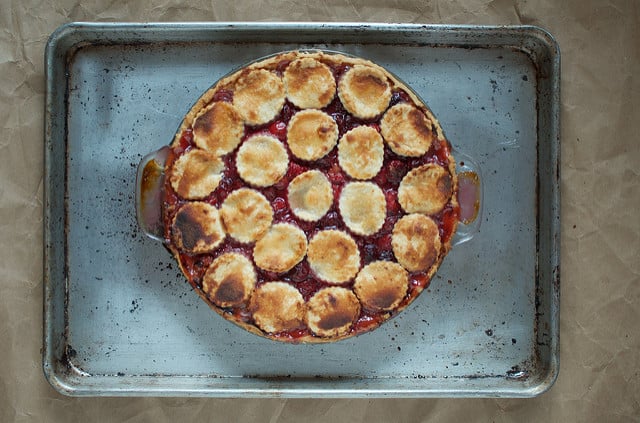 I have some very nice neighbors named Sarah and Dave. They are both grad students and are in the throes of dissertation writing. It goes without saying that they’ve been a little stressed. And to my mind, nothing alleviates stress like a homemade pie. 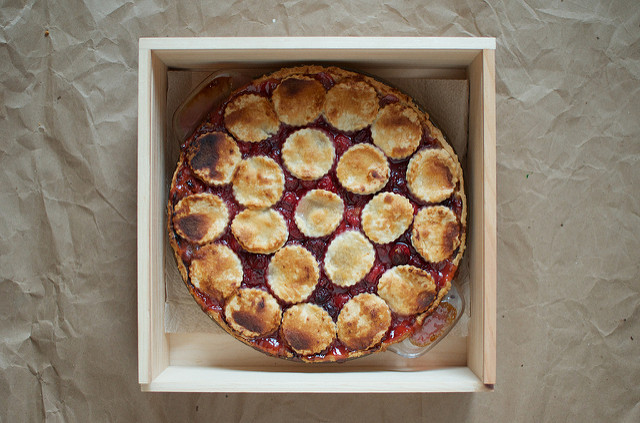 Sour cherries have been in season, so I used them in a simple pie for Sarah and Dave. It was five cups of pitted sour cherries, tossed with 3/4 cup of sugar, 2 tablespoons of cornstarch, and a pinch of salt. I used a basic white flour pie crust and cut the top out using a round biscuit cutter. 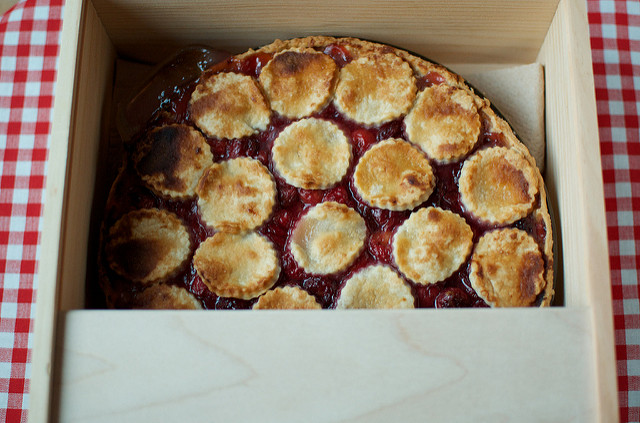 Once it was cool, I tucked it into the Pie Box and Scott and I walked it over to Sarah and Dave’s apartment. They invited us in to share the pie and we stood around for an hour, talking about life, summertime and pie. It was a terrific stress reliever for all involved. 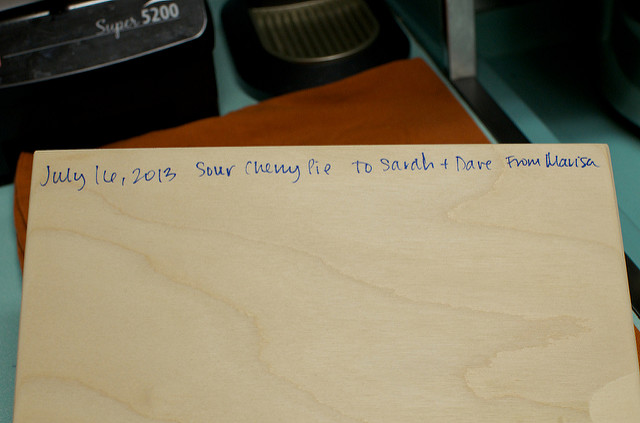 Sarah and Dave plan to “pie it forward” and share the Pie Box, plate and server with a friend sometime in the future. I wrote the name and date of the pie I gave them on the lid of the box, and when they pass the pie kit along, they’ll do the same. Hopefully, this particular pie box will carry many a pie and travel around the city (and even country!). 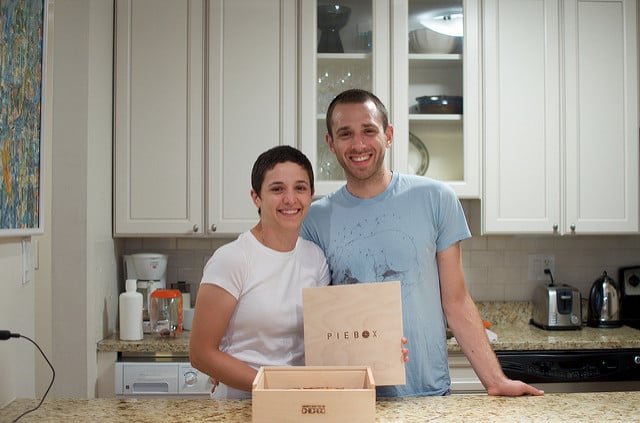 Thanks to the nice folks at Mighty Nest, I have one of these Pie Box and serving kits to give away (maybe you’ll “pie it forward” too!). I’m also including a jar of homemade sour cherry pie filling, so that you can make your own pie.

As you can see, there’s a Rafflecopter widget just below instead of my regular entry guidelines. Because I’m working with Mighty Nest for this giveaway, we’re using it to track entries and give people more opportunities to win. Think of it as an experiment.

Kate at the Hip Girl’s Guide to Homemaking is also giving away a pie box, serving kit and jar of her gluten-free pie crust mix. Make sure to visit her post to enter as well!

This giveaway will run until Sunday, July 28 at 12 noon EST. Open to US residents only.

Disclosure: This is a sponsored post. Mighty Nest provided the pie kit I gave to Sarah and Dave, are supplying the one for this giveaway, and they’ve also given me one to keep. They also provided the Weck jars in which I canned the sour cherry pie filling. All thoughts and opinions remain my own.