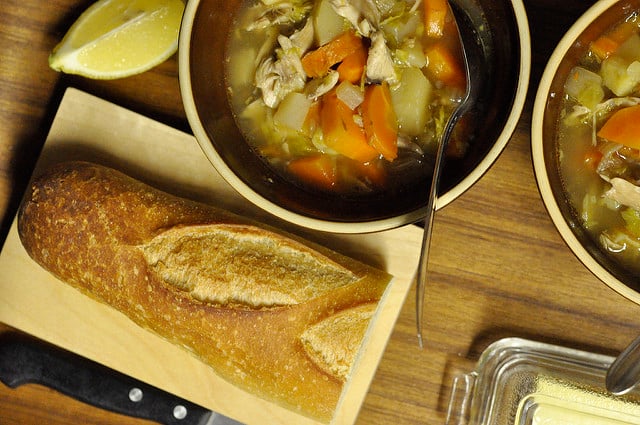 For New Year’s Eve this year, Scott and I hosted a little party. It wasn’t anything fancy. In fact, the idea for it sprung out of a simple desire to have people over to help us drink up some of our leftover wedding champagne (truly, a tough problem to have). I made cheese fondue (not much local there, with west coast wine and Trader Joe’s cheese), a big green salad and roasted a chicken (bought from Meadow Run Farms) for those in need of animal protein.

We sat around for hours with a living room full of friends, eating, drinking and laughing. Our guests brought wonderful things to share like a jar of trail mix (I’m planning on eating a handful on top of my oatmeal tomorrow morning), handmade marshmallows, home fried tortilla chips (with freshly chopped salsa) and some truly miraculous chocolate cookies (each topped with a single, toasted pecan).

I roasted the chicken in my oval Staub dutch oven, sauteeing several fat leeks (chopped in half moons and triple-washed) in the bottom of the pot first, then browning the bird on all sides, before sliding the whole thing (lid on) into a 300 degree oven for about three hours (lid off for the last 45 minutes, to get some nice browning). I served it on a big platter, drizzled with the leek-y juices from the roasting pot and we made seriously quick work of it. Scott actually had to leap in and keep a helpful friend from tossing out the carcass when it looked like there wasn’t a morsel of meat left to nibble (he knows me so well!).

Friday morning, after sleeping until noon, we made the decision that we weren’t going to set foot outside all day long and so I started investigating what we might eat throughout the day. Lunch was some of the frozen appetizers we’d forgotten to heat up for the party (delicious, but very greasy and not at all local) and for dinner, I started a pot of chicken broth. I used the rescued remains of the roasted chicken (all the juicy remains from the roasting pot too), as well as some frozen chicken feet (they make the best stock/broth), an onion, several cloves of garlic (both from the Fair Food Farmstand), a few sprigs of rosemary (plucked from a friend’s garden more than a month ago, they’ve remained green and fragrant wrapped in plastic and refrigerated) and two fat carrots, purchased at the Rittenhouse Square Farmers Market before I left for the holidays. I had no celery, so I left it out (it felt oddly thrilling and rebellious, I NEVER skip the celery).

The soup/stock/broth bubbled away all afternoon. An hour before we wanted to eat, I pulled out a dutch oven and browned a minced onion and a couple more carrots. Several ladled of broth went into keep things from burning. Cubed potatoes, some turnips from the bottom of the crisper (remnants from my CSA, which ended the second week of November!) and shredded brussels sprouts (I’d typically use cabbage, but I didn’t have any). More broth. The bits of chicken, picked out from the solids that I’d strained from the broth making. Salt and pepper.

Once the potatoes were tender, we feasted on this local soup, dipping in hunks of day old baguette from Philly’s Metropolitan Bakery. A perfect way to welcome 2010, if you ask me. (And lest you think that there wasn’t a jar in sight, I nibbled on some dilly beans plucked straight from their vessel in between bites of my soup, just for a bit of pucker.)