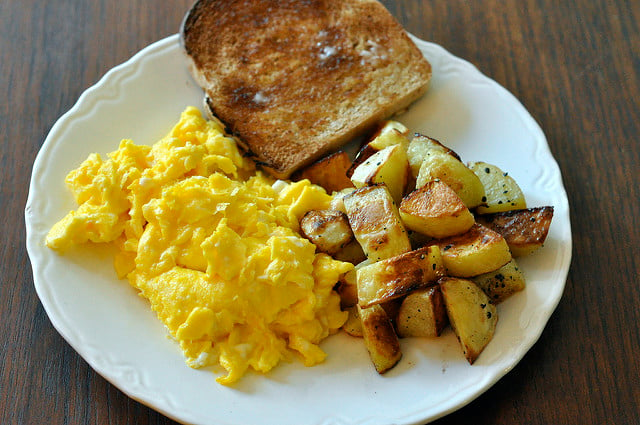 Typically, Sunday nights are my fall-back position for these Dark Days meals. Waiting until then means that I have Saturday to hit the Rittenhouse Square farmers’ market and the Fairfood Farmstand and restock my week-ravaged pantry as well as most of the day to cook (if I decide to do something time-intensive).

However, I knew heading into this weekend that I wouldn’t be around on Sunday night to cook dinner (I’ll be in New York, having dinner with these two lovely ladies instead). And having sprinted through the week cooking several dinners that all included some local ingredients but weren’t all local, that left Saturday morning.

So I did what I’ve seen a lot of lately (at least on the Dark Days circuit). I made a local breakfast. And lo, it was good. I peeled and cubed some elderly potatoes (Winter Harvest) and tossed them with bacon grease (Meadow Run Farms), salt and pepper in a cast iron skillet. While they roasted, I gently scrambled six eggs (Winter Harvest) and made toast (baked with my own two hands, from a combination of local and non-local flours).

Scott immediately squirted ketchup on his eggs (Heinz Organic, which is at least headquartered, if not made, in the state) and I ate my toast with a few dabs of plum jam I made last summer (six months in the jar, it tastes so bright and summery). Then we went off to do a cooking demo at Foster’s Homewares, well-fed.