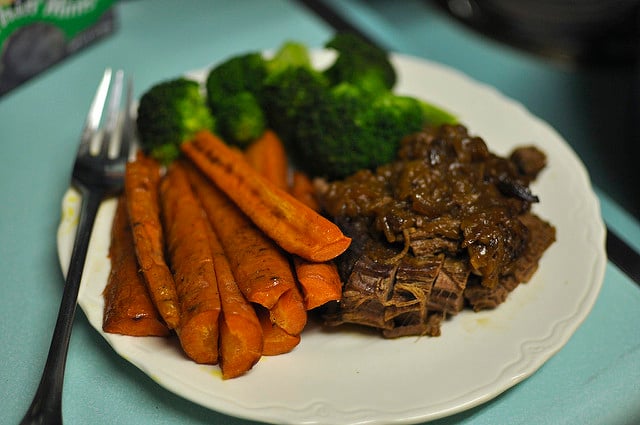 Despite my Jewish roots, beef brisket is not a cut of meat I grew up with. We had the occasional pot roast, but mostly my mom gravitated towards quicker cooking bits of beef and lots of chicken. It wasn’t until a few years ago that I discovered the miracle that is brisket, thanks to my meat buying club (recently renamed Sweet Stem Farm). 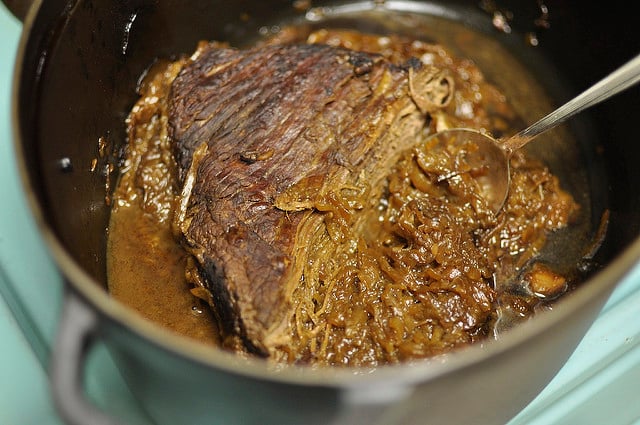 In preparation for the braising urge that I knew would soon strike, I added a brisket to my January order and this Sunday was the day (it also happened to take up an excessively large amount of room in the freezer). My preferred way to braise brisket is to season it well with salt and pepper, brown it in my big oval Staub pot and then remove it to plate. Then three or four chopped onions get cooked in all the deliciousness that remains in the pot. Once they’ve gone soft and brown, the brisket goes back in the pot and half the onions go on top. Two bottles of beer go in (I used Philadelphia Brewing Company’s Kenzinger this time and it was perfect) and then the whole pot goes into the oven at 300 degrees for four to five hours.

The meat was incredibly tender, flavorful and fragrant. It smelled so good while it was cooking that I could barely take it. We ate it with some roasted carrots (local) and steamed broccoli (not local – the pickings are really slim around here for local green things at the moment). So, so good.