A Handy Helper for Speedy Pickling 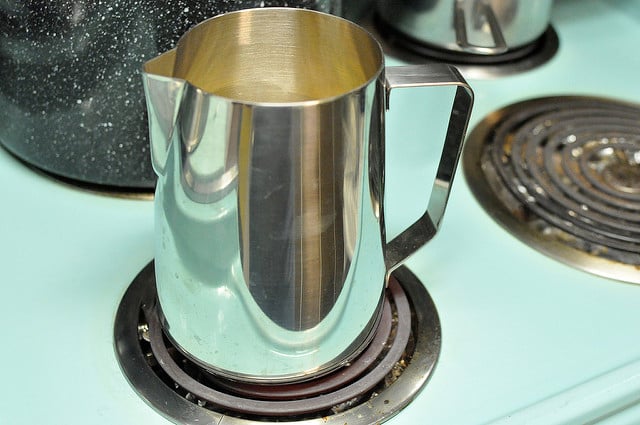 Several years ago, Scott and I filmed an episode of Fork You about making risotto with our friend Jessie. We cooked in her kitchen and though the whole day was fun, there’s one part of that shoot that has particularly stuck with me. You see, Jessie had this pot that was the most brilliant thing ever for risotto making. It had a built-in spout, and instead of having a conventional pot handle, it had a heatproof handle that was shaped like one you would find on a pitcher. It made adding the stock to the risotto incredibly easy. It’s not untrue to say that I coveted this ingenious little pot.

I continue to think about Jessie’s pitcher-styled stock pot, now imagining how amazing it would be for pickle making, as it would make filling jars with brine positively breezy (and would mean fewer dishes to boot). I have searched high and low for something similar and have come up empty-handed. Until now. 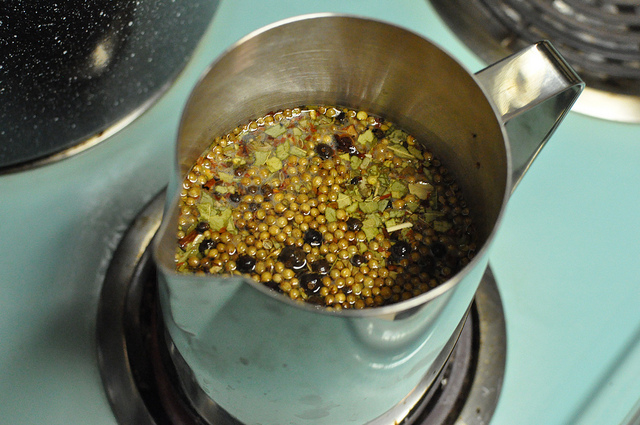 Recently, while standing in a coffeeshop waiting for an iced coffee (my favorite way to combat steamy days), I took note of the pitchers they used for steaming milk. Stainless steel. Sturdy. Able to withstand the high heat of the steaming wand. Could this be the vessel I’ve been searching for? I ordered the biggest one

Amazon carried and took it on a test pickling drive. It withstood the heat of my stove and made filling my jars so quick

Side note: I am beginning to be convinced of the idea that it’s always better to put the pickling spices directly in the jars, and not mix them with the brine. I get very inconsistent spice distribution when I’ve added them to the brine like I did for this picture.

The pitcher holds a bit less than 2 quarts, and you wouldn’t want to fill it to the brim, so it’s really only good for smaller batch pickling (say 4-6 pints). However, that’s much of what I do, so it works beautifully for me. If you pickle in similar amounts, consider adding this handy tool to your kit (do use a small pot holder when picking it up, that handle isn’t designed to be heatproof).

All this week, Simple Bites is featuring canning tips, tricks, techniques and recipes. I contributed a piece on how to can whole tomatoes to the effort and a number of other bloggers have lent their canning talents and skills to that site as well. For those of you who just can’t get enough preservation information, please do go check it out!

My latest piece in Grid Philly is available online, for your reading pleasure. I wrote up a trio of no-cook recipes as my way of helping people beat the heat. Leaf over to pages 30-31 of the digital edition and take a gander.

23 responses to “A Handy Helper for Speedy Pickling”